As part of her work on a partnership between this museum and the National Library of Medicine, Project Assistant Mallory Warner researched the history of diphtheria—and discovered a tale she won't soon forget. Please note: this blog post contains some graphic content and images.

I was never a horse-obsessed tween, but in my 20s I think it's finally catching up with me. My research for an upcoming display led me to the story of diphtheria. It is by far my favorite from the show, and I've got to say, it's because of the horses who helped manufacture the first cure for this deadly disease.

Diphtheria used to be known as the "scourge of childhood." The bacterial disease was particularly hard on young children and often spread quickly through schools. The infection works in a horrifying way, simultaneously poisoning the victim and slowly suffocating him or her as the bacteria grow into a thick film in the throat.

For most of history, there was little doctors could do to help someone with diphtheria. Tracheotomies and intubation were one strategy that emerged to counteract the suffocation. Still, the results of this treatment weren't amazing. The process was often traumatizing for the patient and the parents alike, and despite greater success than no treatment at all, it did not lead to a great change in survival rates. 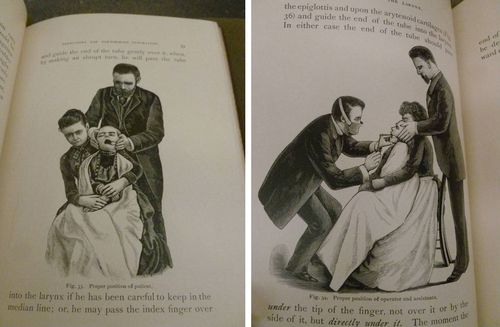 These illustrations, demonstrating the proper way in which a child is held and gagged in preparation for intubation, capture the disturbing nature of the procedure. From Intubation of the Larynx by Frank Waxham (1888). 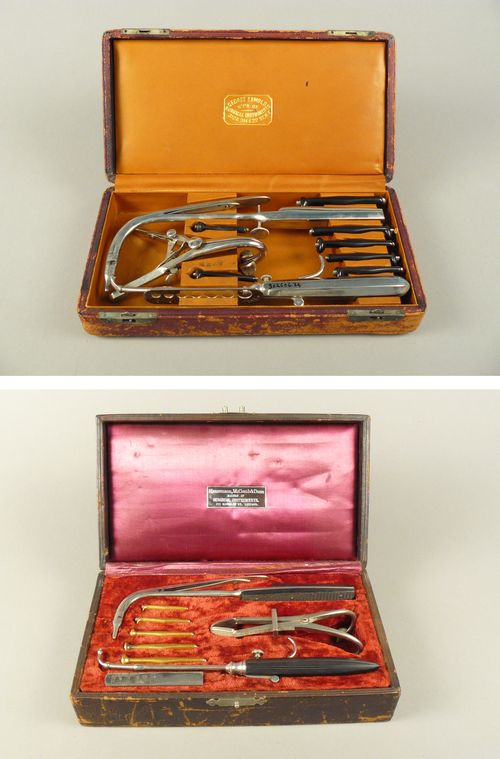 Two intubation kits from the collection. Tubes are hard rubber (above) and gold plated (below) and would remain in the patient's throat until he or she either became well and coughed them back out or died.

By the late 1890s, however, great leaps in the understanding of diphtheria and the discovery of "serum therapy" would bring the first truly effective cure for the disease. Study of the diphtheria bacteria showed that it produced a toxin which caused the symptoms of the illness. (Scientists at the time often used the word "toxine" in place of today's "toxin," adding an olde-tyme charm to many of the historic accounts I'm reading.) 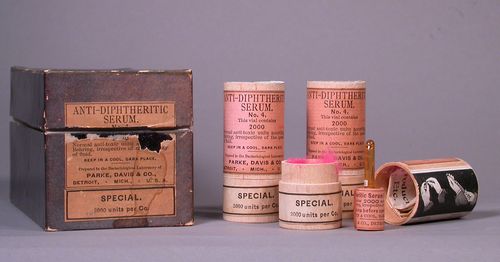 Antitoxin serum for diphtheria. Notice the hot pink fluff used to protect the glass ampule inside the wooden container.

Building off the work of Louis Pasteur, French and German scientists inoculated animals against diphtheria using preparations of toxins harvested from bacteria grown in the lab.

Exposure to small doses of the toxin caused the animals' bodies to build up immunity against diphtheria infection. While this obviously laid open the possibility for vaccinating people against diphtheria, doctors needed an immediate solution for those already suffering from the deadly disease.

In 1890, it was discovered that serum made from the blood of immunized animals contained an "antitoxin" which, when injected, cured patients suffering from diphtheria. (Today, we understand antitoxin to be antibodies—the tiny proteins the body uses to identify and fight foreign invaders.)

And here's where the horses come in. To produce large amounts of antitoxin containing blood serum for human medicine, scientists needed animals with a lot of blood. Though researchers tried cows and donkeys as potential "living factories," horses were found to be the least affected by the injection of the toxin, typically only exhibiting a low-grade fever.

From this knowledge, work was done to create small production centers for antitoxin serum. The New York City Health Department was a pioneer in the field, setting up its own facility where horses were kept and bled to provide a local source of antitoxin serum for doctors.

In 1979, the New York City Health Department donated many of its records to the museum, including those that touch on its work with antitoxin production. When delving into the collection recently, I discovered three objects which contain haunting records of both horse and human experiences with the disease and its treatment.

Two of the collection's hundreds of glass lantern slides were particularly striking. Thanks to the help of Anna Britton and Alicia Cutler in our Collections Documentation Services department, we're able to show you digital images of those slides, likely the first time they've been seen by anyone outside the museum since the objects were donated. Eventually we hope to digitize the whole collection. 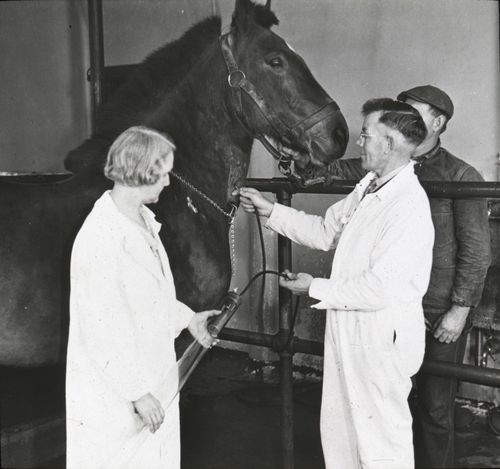 A horse being bled for antitoxin serum. Look closely and you can see the first line of blood making its way into the collection tube. Notice also the shaved spot on the horse's neck as well as the fact that its mane has been clipped, possibly to keep the hair from getting in the way during bleedings. 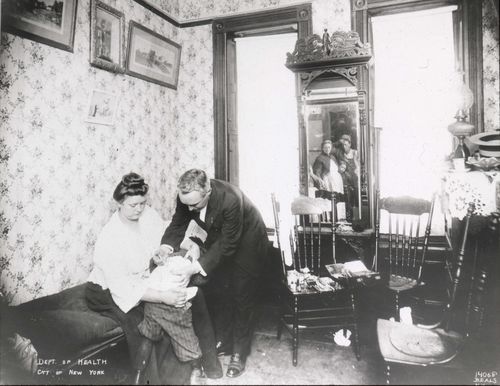 A boy receives an antitoxin injection while being held by a nurse and doctor, likely from the New York City Health Department. The photographer lined up a clever composition that allows us to see what I presume is his family's worried reaction in the mirror. I love that we can see the father wiping his brow and the sister peeking out from behind her mother's skirt.

While these images show the dramatic beginning and end of the antitoxin process, there is something equally moving about another object from the collection: the ledger containing the records of the early work on the horses. Starting in 1897, antitoxin lab workers recorded, in their neat script, the horses' descriptors —including color, sex, price, age, and "final disposition." These details help to fill out tiny personal stories of these horses, reminding me of census records I've seen when conducting research on people. The record shown below is for Animal Number 111, a bay gelding of at least seven years old. Purchased for $215.00, he was at the facility just over a year before he died, and in that time underwent nine rounds of bleedings. 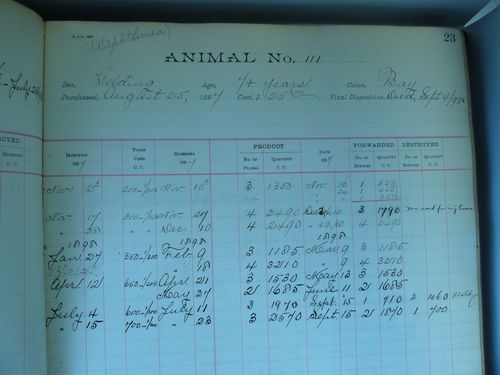 Today, with nearly all American children vaccinated, diphtheria has been practically eliminated from our everyday lives. The last reported case in the United States occurred in 2003. Unsurprisingly, there are no longer any American horses involved in the production of antitoxin serum for diphtheria, although facilities do exist in other parts of the world.

Like so many stories, the story of diphtheria has faded from our memories. For me, historical research is a joy because it brings me closer to people from the past, but the story of diphtheria is the first where I felt a connection with long-gone animals. The revelation that animals, too, play an important role in history will stick with me for a long time.

Mallory Warner is a project assistant in the Division of Medicine and Science and has blogged about the big story behind synthetic human growth hormone and Kary Mullis, who won the Nobel Prize in Chemistry. For more horse history, read this blog post about Winchester, the "War Horse" of the Civil War. 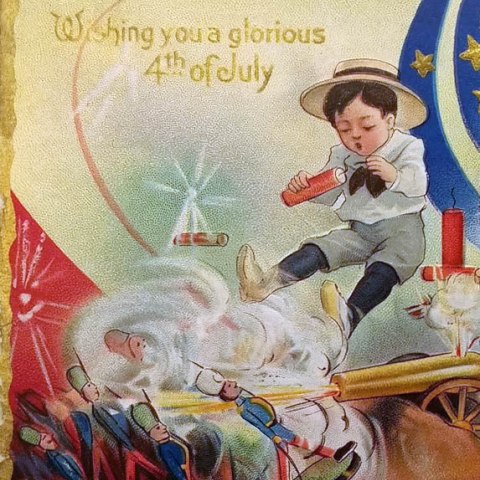