"I would do it all over again": Reflecting on the 50th anniversary of Civil Rights Movement milestones

The 50th anniversary of the March on Washington makes intern Caitlin Gropp's research in preparation for a nationwide, online program about the Civil Rights Movement jump right off the page.

I have been fortunate enough to intern during a very exciting time for the Department of Public Programs and the Program in African American Culture at the National Museum of American History. We are in the midst of the 50th anniversary of the Civil Rights Movement, and I am working on the commemoration of two of the movement's seminal events: the August 1963 March on Washington for Jobs and Freedom and the 1964 Freedom Summer Campaign.

On Wednesday, the museum will celebrate the 50th anniversary of the March, when more than 200,000 civil rights activists marched upon Washington in demands of both rights recognition and social change. Carrying signs and singing civil rights anthems on the National Mall, they listened to inspirational speeches by some of the movement's most prominent leaders, including Martin Luther King's "I Have a Dream" speech. We will commemorate the event by showing footage of the march itself. 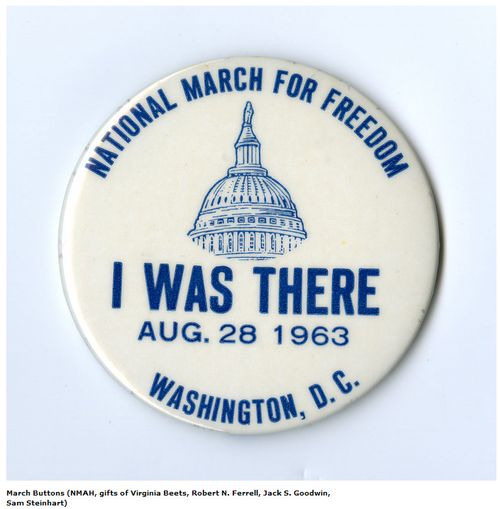 So why, then, are these events that happened some 50 years ago still relevant today? Both the March and Freedom Summer are indicative of what can be accomplished through civic engagement and activism. Both were critical to the adoption of watershed civil rights legislation with the 1964 Civil Rights Act and the 1965 Voting Rights Act.

The Freedom Summer project allows me to participate in the lofty discussions I'd always imagined academics and curators engaging in, and I was not disappointed. We broached subjects such as the campaign's legacy, recruitment, paradigm shifts, Mississippi's significance, as well as the consequences and costs of the campaign.

The costs were great, indeed. In some archival footage I researched, I learned that activists suffered from very real breaks with their families, and were threatened by their schools with the revoking of scholarship funding or even expulsion.

Activist Zohara Simmons spoke of how her grandmother died, never having completely forgiven her, yet that she regrets nothing: "As young people, we went against the system, including our parents, because we knew what needed to be done... I don't regret it... I would do it all over again [and I'm] so grateful that I was a part of the movement of my lifetime, that I gave all that I could give."

Concerning the costs, in the case of Freedom Summer, it resulted even in death. The 1964 Freedom Summer Klan murders of activists James Chaney, Andrew Goodman, and Michael Schwerner shook the nation, and prompted President Lyndon B. Johnson to launch a massive FBI investigation. (Learn more about these murders in this video.) What resonates most, I think, is the notion that these students and activists of my age, sometimes even younger, put everything on the line to change the nature of race relations and politics in this country. We hope that the Freedom School and National Youth Summit demonstrates to students that civic duty doesn't end at the ballot box, but rather they too can be activists and agents of change within their communities, like the Freedom Summer students 50 years ago.

To know history is a means to becoming a part of it. Not that I needed it, but this summer has reaffirmed my sense of history's purpose. Discussing how it continues to inform today's events confirms its importance and relevance, and provides me with an additional defense to anyone asking me what it is exactly that I'll do with my history degree.

Caitlin Gropp is an intern in the Department of Public Programs and African American Culture. On February 5, 2014, the Museum will be talking with high school students, scholars, and activists about the history of Freedom Summer and the legacy of the civil rights movement for modern day activism in the National Youth Summit on Freedom Summer. Pre-registration is now open for this online event.