Uncle Sam: The man and the meme

In honor of Uncle Sam Day, we tracked down the story of the familiar bearded figure. 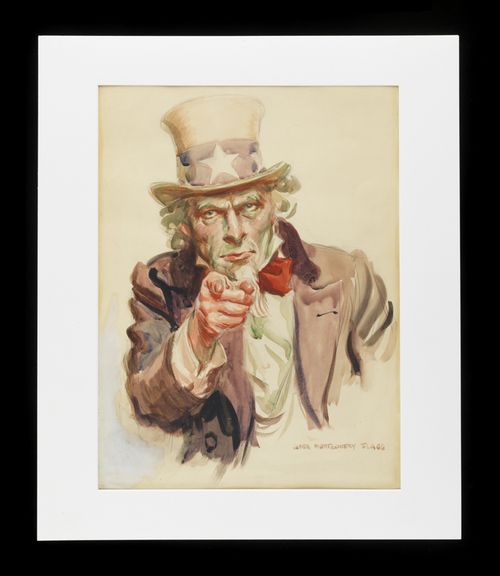 Drawing by James Montgomery Flagg of Uncle Sam. Flagg called the recruiting poster that uses this image "The most famous poster in the world."

He has been part of advertising for over 100 years, appearing on products ranging from cereal to car insurance. He's recruited Americans for military service and encouraged us to support the war effort. His name is mentioned in popular song. He makes regular appearances in political cartoons in newspapers across the country. He even hangs out in the hallways of this museum. 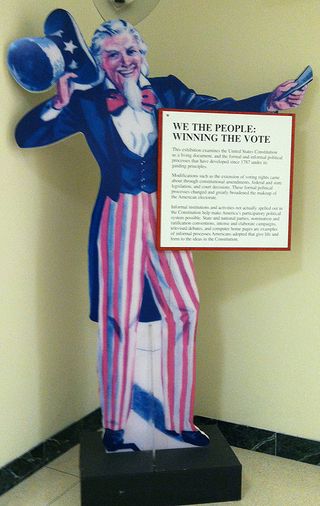 A retired exhibition prop depicting Uncle Sam leads the way down one of our staff hallways, a landmark for new staff and interns

The image of Uncle Sam as a personification of our nation and government is widespread and instantly recognizable. But did you ever wonder about where he came from? Was he purely imaginary, or based on a real historical figure?

The character Uncle Sam has a long history. The use of allegorical figures to represent a place dates back to the classical Roman era, and the Renaissance re-established them in Western art and culture by the 17th century. In the early days of the United States, a female figure named Columbia (the name is derived from Christopher Columbus) stood for the nation; she kept her place as an often-used symbol of our country through the early 20th century. 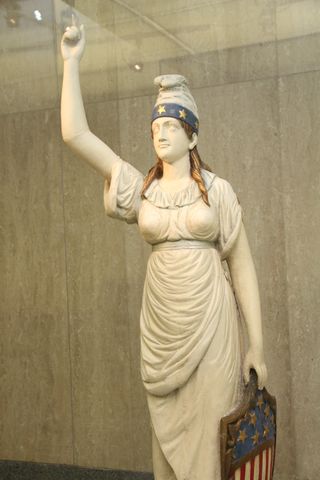 Columbia, 1850–1880. Columbia was widely recognized as the historical female personification of the identity of the United States. Derived from the Latin for "The lands of Columbus," Columbia was often associated with ships and places. By 1920, the Statue of Liberty in New York Harbor replaced Columbia as the symbol of America, welcoming waves of immigrants to new lives in a new homeland.

Uncle Sam has been around for almost as long, sometimes appearing with Columbia as well. There are several theories about where he comes from, but the most cited origin story traces Uncle Sam back to a man in Troy, New York. Sam Wilson delivered meat packed in barrels to soldiers during the War of 1812. Wilson was a well-liked and trustworthy man in Troy, and local residents called him "Uncle Sam." When people around town saw those supply barrels marked "U.S." they assumed the letters meant Uncle Sam, and the soldiers adopted the same thinking. In reality, Wilson had labeled the barrels "U.S." for "United States," and so the two ideas merged—Uncle Sam became a symbol for the United States of America. (This story is also the official one—Congress passed a resolution in 1961 adopting this account as the official history.)

Uncle Sam started appearing in images and literature soon after the War of 1812. He was popularized in the late 19th century in political cartoons by one of the country's most well-known cartoonists, Thomas Nast. However, the 1917 recruiting poster of Uncle Sam asking YOU to join the army is perhaps the most enduring rendition of the national character.

The Division of Armed Forces History at the museum has the original drawing used to produce those posters. James Montgomery Flagg created dozens of posters for the United States during World War I and II. Flagg was an illustrator and artist, and originally made this particular drawing of Uncle Sam for the cover of a newsweekly. The title appearing with the piece was "What Are You Doing for Preparedness?" but for the recruiting poster the caption read "I Want YOU for U.S. Army." 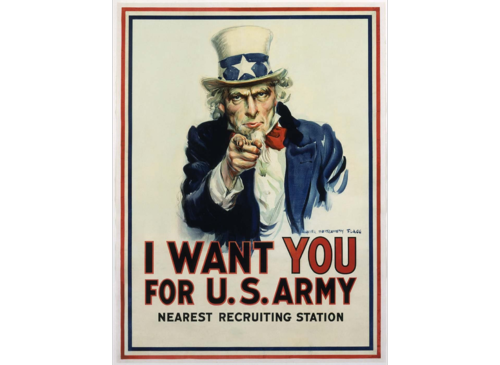 The image and caption were themselves based on an earlier recruiting poster from Great Britain of Lord Kitchener, the British Secretary of State for War, in much the same pose. Kitchener was a popular man in Great Britain and an obvious choice for encouraging the public to support their country in war. Flagg adopted the pose and language of the British poster but transformed it into something more enduring by using an allegorical, rather than historical, figure.

Indeed, the image was a powerful one: Uncle Sam's striking features, expressive eyebrows, pointed finger, and direct address to the viewer made this drawing into an American icon. The government printed four million posters during 1917 and 1918 and the image was used again during World War II. There are numerous spin-offs of the poster—the combination of pose and caption lends itself to variation; it's sort of an early version of an Internet meme. These new, imitative images derive their power from our familiarity with the original poster. 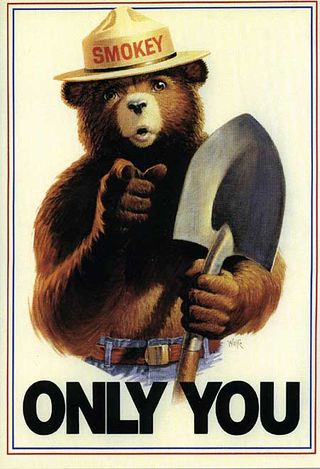 An iconic image of Smokey the Bear. Smokey Bear's famous phrase could be seen as a derivative of Uncle Sam's. Forest Service, U.S. Department of Agriculture.

The original drawing is a little faded but still affecting to those who see it in our art storage room. It's an image that's part of our national vocabulary and belongs to all of us. The museum is pleased that James Montgomery Flagg gave us the original drawing, so that it too belongs to the American people.

Want to learn more about Uncle Sam? Listen to this History Explorer podcast I recently recorded.

Natalie Elder is a collections manager in the Division of Armed Forces History at the National Museum of American History. Curious about other iconic figures? This fire hat includes an image of Lady Liberty while these include images of Hope and Columbia. The Library of Congress website "John Bull & Uncle Sam" includes many fascinating images, such as this one in which John Bull and Uncle Sam share a friendly handshake. 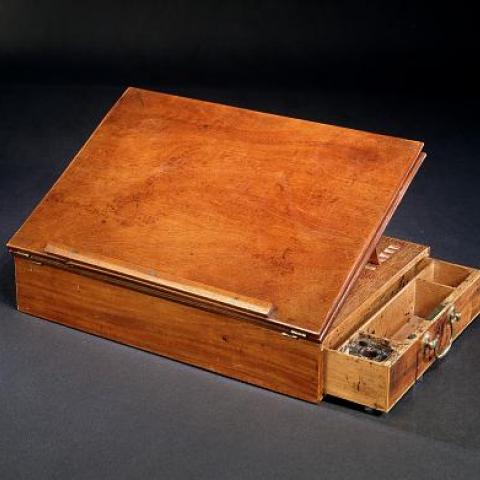