Fair warning: If you get a holiday gift from a staff member of this museum this year, it'll be this book (and no, we are not getting it for free!). The new pan-institutional Civil War book will fascinate not just Civil War buffs but also photography enthusiasts and art lovers. The book's project assistant, Ryan Lintelman, explains how the book came together, highlights the Smithsonian's unique contribution to Civil War history, and talks about one of his favorite objects.

In the run up to the sesquicentennial of the Civil War, we here at the National Museum of American History knew that we would need to do something big to commemorate the anniversary. The question was, in a crowded field (some estimate that over 50,000 books have been published on the Civil War!), what unique contribution could we make?

Our photographer Hugh Talman succeeded in giving us a new perspective on this 1860 life mask of Abraham Lincoln. The plaster mask, made by sculptor Leonard Volk, is in our Political History Collection.

Of course, the answer to that question was under our noses the whole time: our collections. This museum's strength is material culture and recognizing the incredibly important role objects play in our understanding of the past. The Smithsonian is also unique in its interdisciplinary nature—where else can you find this breadth of art, photography, historical artifacts, and archival material, if not under one roof, then within the same institution? Who else could bring uniforms, paintings, photographs, firearms, Lincoln's top hat, and the Appomattox surrender furniture together to look at American life during the Civil War so broadly? 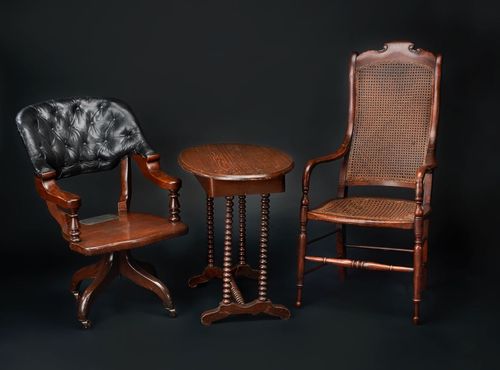 Robert E. Lee signed the surrender of the Army of Northern Virginia at this table. Sitting across from him, in the leather chair, was Union Army General Ulysses S. Grant.

Over the past two years, working with Smithsonian Books and editor Neil Kagan, we engaged 50 writers from 13 Smithsonian units to write about their outstanding collections, organized new photography of over 500 American History objects, and created a beautiful new book, Smithsonian Civil War: Inside the National Collection. 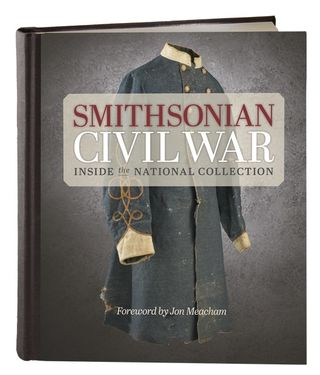 "Smithsonian Civil War: Inside the National Collection" brings together objects from across the Smithsonian Institution to commemorate the 150th anniversary of the Civil War

Each of the books authors has written a compelling story of how small, seemingly mundane objects as well as priceless works of art or historical importance can help us gain a greater understanding of the war in American memory. 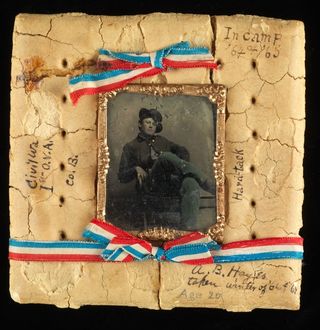 This hardtack tintype frame and portrait of Augustus Bigelow Hayes, from the Division of Armed Forces History, is one of many unique objects shared in the book

I had the opportunity to write about this hardtack tintype frame. It was owned by Augustus Bigelow Hayes, who signed up in the First Ohio Volunteers at the age of 17. He fought in battles across the Western theater and was wounded at the Battle of Stones River, Tennessee, in 1862, but recovered to become a successful businessman and politician back home in Ohio.

He had this tintype portrait taken after his injury, posing as if to say, "It’ll take more than that to kill me." In the winter of 1864-1865, Hayes was issued this piece of hardtack, the rock-hard cracker that was a mainstay of soldier's rations, and he carved out its center to form a frame for his soldier's portrait. He then took it home after the war, where it miraculously survived until the family gave it to the museum in 1979.

I like this object because it is a small story which represents larger concepts in American and Civil War history: the soldier's experience, the technology and importance of photography in American culture, and the memory and legacy of the war. 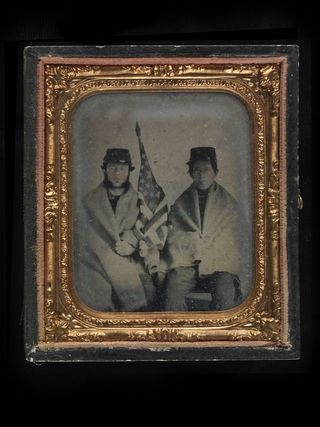 With beautiful new high resolution images by our photographers Hugh Talman and Jaclyn Nash, and 150 historical essays by our curatorial staff, this book is as close as you can get to an up-close-and-personal, behind-the-scenes tour of the Civil War collections at the Smithsonian Institution. After surveying, researching, photographing, and discovering exciting new details and stories about our objects over the past two years, we're excited to share this new book with the world.

You can buy your copy of Smithsonian Civil War: Inside the National Collection here or in the museum store. Ryan Lintelman has previously blogged about the Battle of Gettysburg.