This Veterans Day weekend marks the 20th anniversary of the dedication of the Vietnam Women's Memorial. Curator Karen Lee spoke with Glenna Goodacre, the artist who designed the memorial, about another of her well-known designs—the Sacagawea dollar coin.

When I was 12, I wore a round, metal Prisoner of War bracelet. I don't recall exactly how that bracelet came into my life or what annealed my spirit to an American POW thousands of miles away, but his name—Colonel Norman C. Gaddis—has not been erased by time. I remember watching his safe return from the Hanoi Hilton in a live television broadcast in 1973. Thanking us for our prayers, Colonel Gaddis said it was good to be back home, and it felt as if he could see me and family watching him and his fellow soldiers get off the plane. My living room was filled with excitement, tears, and relief, and that round metal POW bracelet forever links me to inexplicable joy.

Life has a way of repeating. Now, nearly 40 years later, another round, metal object is the subject of my interest, or more aptly, the woman who created it is. Glenna Goodacre designed the obverse for the U.S. Sacagawea dollar coin but, perhaps surprisingly, she also designed the Vietnam Women's Memorial. 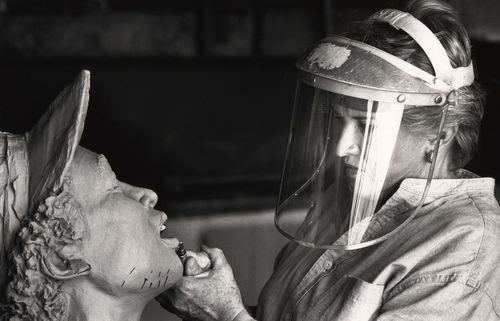 I wondered how an artist could switch gears to produce something as tiny as a coin design when their passion was monumental-sized sculpting, and where better to seek clarification than Ms. Goodacre herself?

One of the great joys (and awesome responsibilities) in my work as a curator with the National Numismatic Collection is the opportunity to talk to people about their work. In museum-lingo we call it an "oral history interview," and the conversation not only enriches our understanding of how people are shaping the world around us but also provides a chance to collect objects which preserve a physical record of their story. And so, the gracious west Texan fulfilled the request to be interviewed and even made a generous donation of sketches, plasters, coins, and related artwork to the National Numismatic Collection. 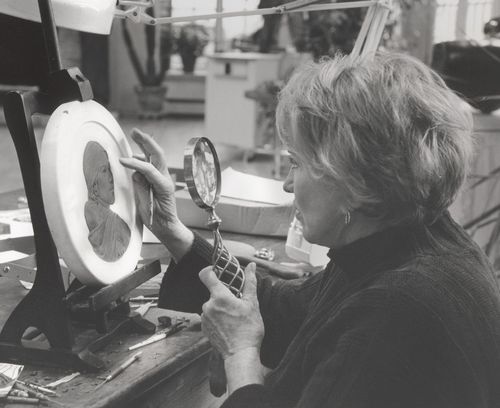 So why did this artist—renowned for thinking big—constrain herself for a coin design? Well, it turns out that the same imagination guides the creative process on both massive and miniature work. The challenge is to focus the message.

Goodacre told me, "The coin is very, very small and you cannot fit all of my ideas on it." Yet, she managed to fit a big idea—that Sacagawea was trying to get back home after her long journey on the Lewis and Clark Expedition—on a tiny surface. This emotional message is part of what Glenna hopes viewers feel when they see the coin.

Emotion, message, feeling—these words came up often during our oral history interview and provoked other questions. Are people surprised to discover that the same artist who designed the Vietnam Women's Memorial also created the Sacagawea dollar coin? Putting that question to the test, I found one of the coins in my pocket change and went to the memorial.

Curator Karen Lee compares the Sacagawea coin with the memorial. The video is also available on YouTube.

Indeed, people were surprised, wondering if it took a different skill set to create a statue. Some commented that it might be harder to create an emotionally evocative coin design like the Sacagawea dollar because the surface area is so small. For me, another surprise was learning that whether you are sculpting on massive or miniature scale, art can only be as good as your technical skill.

Unlike a painter, whose creativity may go directly from imagination to canvas, a sculptor first sketches, then models a concept to see how it will look in three dimension. Smaller models, made using clay, resin, and metal, become larger ones until the concept is fully envisioned. In the case of a coin, however, the process is reversed. Coin designs are more limited, and instead of modeling up to full scale, you begin to reduce the design down.

Imagine how many wonderful coin concepts must be abandoned because they can't withstand the distortion of shrinking. Lucky for us, Ms. Goodacre is a master of both large and small. 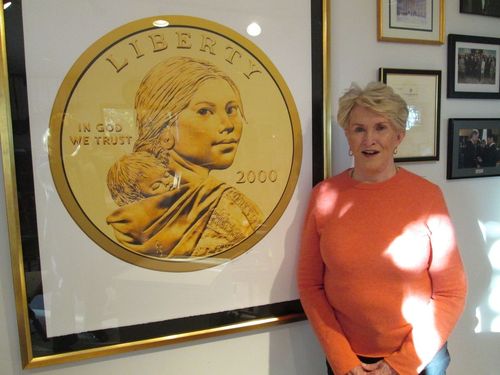 Goodacre in her office standing next to a large-scale image of her Sacagawea coin design. Photo by Karen Lee.

Visitors at the Vietnam Women's Memorial may have been surprised to learn that Ms. Goodacre created both the memorial and the coin, but all of the people I talked to felt that the coin was as much a work of art as the sculpture. And to think, it only costs a dollar!