Edna Greenwood: A passion for preserving our everyday past

As the National Museum of American History marks its 50th anniversary, we also celebrate the many women who have enriched and informed the institution. One of these is Edna Hilburn Little Greenwood (1888-1972), who had an eye for the history of ordinary folks. Museum Specialist Leslie A. Wilson shares her story for Women's History Month.

Edna Hilburn Little Greenwood was a passionate collector of early American antiques, mainly from rural New England. But unlike her peers in the 1920s and 1930s, she was not interested in expensive show pieces. Instead, she sought out the stories that simple household and farm items revealed about life in 18th century America. She was one extraordinary "ordinary" woman who made an impact on the very way we consider American history and the objects related to our past. 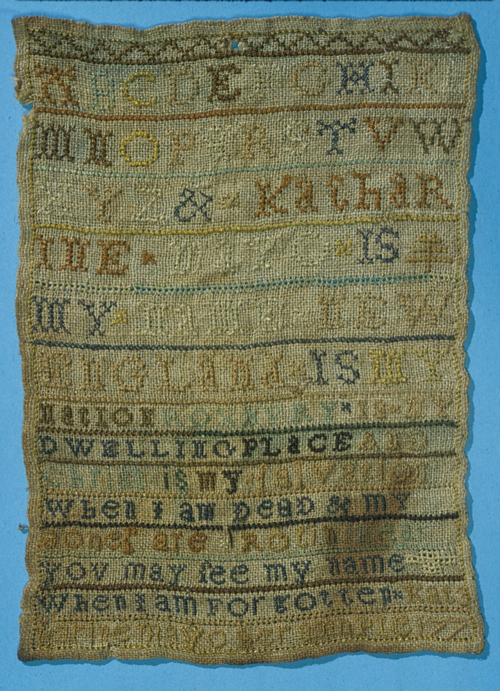 From the Greenwood collection, a sampler sewn by Katharine Mayo in 1773, Roxbury, Massachusetts

Edna Muriel Hilburn loved the New England countryside, but was born in the industrial city of Lynn, Massachusetts. With the financial support of her uncle, a prominent Boston retailer, she attended boarding school in Germany and later Smith College. While a student at Smith, she became fascinated with New England antiques. She traveled to nearby farm sales or "vendues" where she bought whatever caught her eye, from inexpensive tools to domestic goods like lamps or an iron toaster.

She was enthralled by the stories evident in these seemingly common, everyday items and wanted to learn all she could by talking with the "old folks" who had grown up in families who had used them. Edna taught herself about the material culture of New England through her adventures at the vendues and her lively discussions with sellers.

Following her graduation from Smith in 1911, Edna married Amos R. Little, a young attorney from an established Boston family. Longing to live in a historic, country home, the Littles bought the Goodale Farm (renamed Times Stone Farm) in Marlborough, Massachusetts, in 1925. Built in 1702, Edna's new home provided an authentic space in which she could recreate 18th century living. Although it was the mid-1920s, she wanted to live much as the original inhabitants had done. The family regularly used the fireplace for heat and cooking, candles for lighting, and furniture made over a century prior. 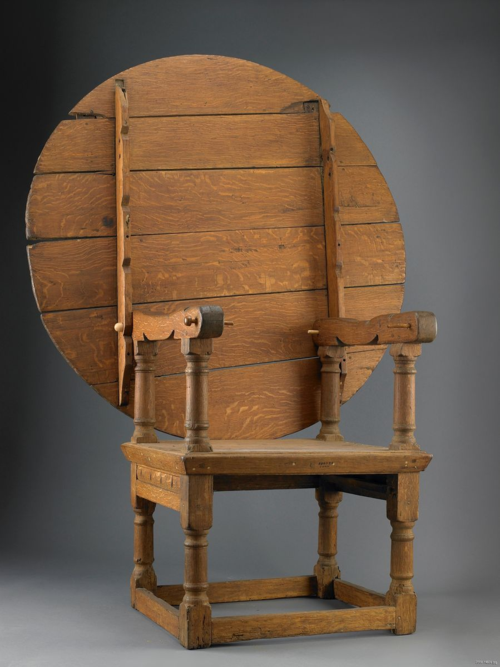 An oak chair-table dating to around 1670 from Connecticut 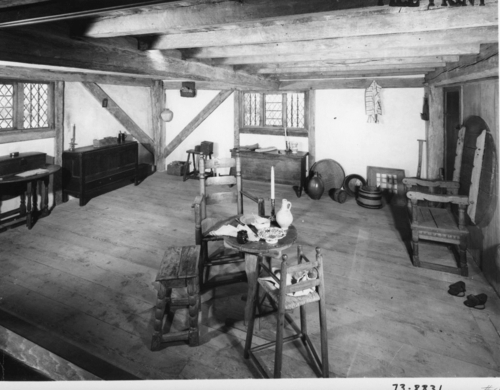 She filled Time Stone Farm with colonial and federal objects, primarily from New England, which she and her family often used. As the collection grew, it contained everything from rare books to farm equipment. In 1934, Edna re-married, this time to a local doctor and long-time family friend, Arthur M. Greenwood. She and Arthur shared a passion for New England history and antiques. The pair had collaborated for many years on Time Stone Farm and the ever-growing collection that it contained.

The extensive Greenwood Collection came to the Smithsonian, in part, through the efforts of a curator of ethnology named C. Malcolm Watkins (1911-2001). The Harvard-educated Watkins joined the United States National Museum as a curator in the Department of Anthropology in 1949. 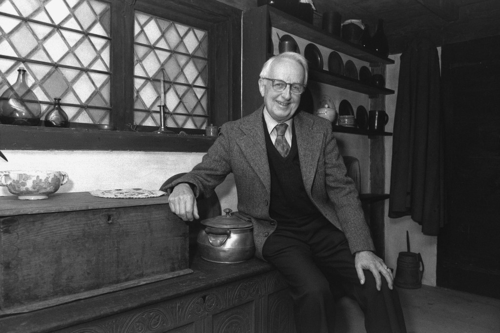 Watkins had known Edna Greenwood since he was a young man through the Rushlight Club, an organization focused on historical lighting. Through his interactions with her, Watkins recognized Edna Little Greenwood's keen talent for obtaining the best examples of early American and New England artifacts. He also shared the Greenwoods' desire to share the stories about our history embodied in these objects.

In April 1949, Edna wrote to the director of the U.S. National Museum, Remington Kellogg, saying, "[W]e feel that these materials will form the basis for a series of exhibitions that will make the national collections a Mecca for students of American culture." 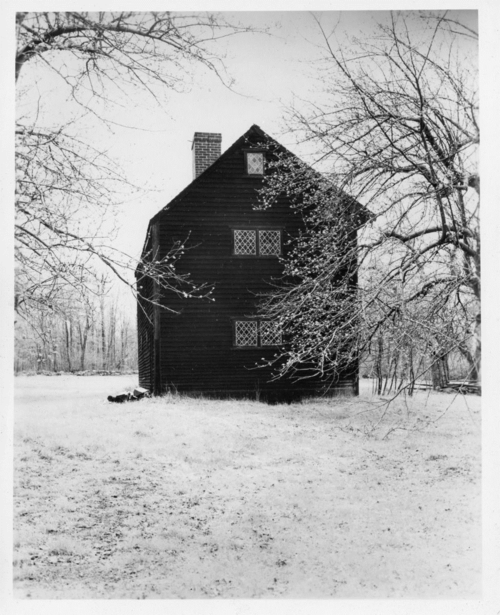 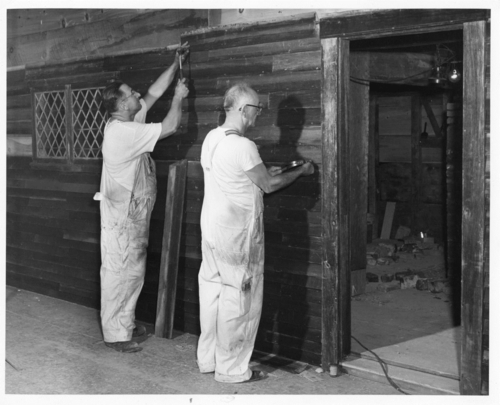 The Greenwoods' large donation of over 2,200 objects in 1951 ranged from furniture to samplers to an entire historic building. Many of these artifacts became the cornerstones of several important exhibitions including Everyday Life in Early America (National Museum of Natural History) and the Hall of Everyday Life in the American Past (Museum of History and Technology). 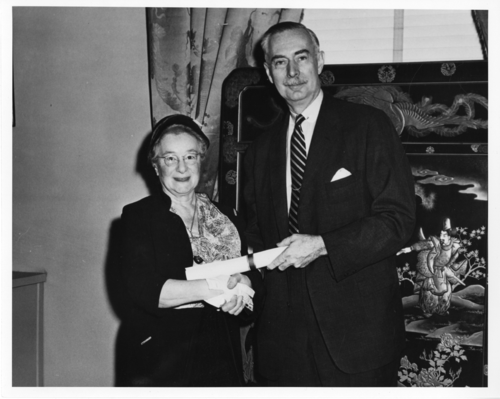 Edna Greenwood's commitment did not end with the 1951 gift. She also donated her time, often coming to Washington, D.C., for weeks or months to assist Watkins and his staff. She was serious about the museum becoming a resource for students and pledged her continued involvement with the institution and her collection. A champion of the Smithsonian for decades, Edna became an honorary Smithsonian fellow in 1956.

As the National Museum of American History celebrates its 50th anniversary, we are indebted to the generosity of Dr. and Mrs. Arthur Greenwood for their gift, which acted as a foundation for this museum's holdings. The Greenwood Collection continues to educate and engage visitors and scholars alike. It represents an important aspect of the American experience that was not only preserved, but explored by Edna Little Greenwood. She shared her knowledge and deep appreciation of these objects so that others might also create a legacy of collecting and exhibiting early American stories and artifacts. Her personal passion, which was contagious according to those who knew her, not only saved many important pieces, but also encouraged a new approach to looking at history and our nation’s material culture.

Want to learn more about Edna Little Greenwood? Check out these books: Briann G. Greenfield's Out of the Attic; William S. Walker's A Living Exhibition: The Smithsonian and the Transformation of the Universal Museum; and Elizabeth Stillinger's A Kind of Archaeology: Collecting American Folk Art, 1876 – 1976. You can also learn more about the chair-table here.

Leslie A. Wilson works with the Greenwood Collection as a Museum Specialist in the Division of Home and Community Life at the National Museum of American History. She is a graduate of the Smithsonian Institution-George Mason University Master of Arts program in the History of Decorative Arts. She has also blogged about super bowls.

Posted in From the Collections, Behind the Scenes