When lightning strikes: The making and meaning of a patriotic symbol

"The Star-Spangled Banner" song turns 200 this year. As part of her work on the upcoming Smithsonian Channel film A Star-Spangled Story: Battle for America, guest blogger Molly Hermann had the up-close opportunity to reflect on her personal connections to the song and the flag that inspired it.

As ubiquitous as grass in a yard or mailboxes along the roadside, for Americans, our flag is the king-daddy of symbols. We planted one on the moon. Visitors tour Washington, D.C., every year wearing them on their t-shirts. The search to make sense of the 9/11 attacks caused such a run on flags you couldn't buy one for a month. As children, we pledge allegiance to it. Caskets come home draped in it. It reflects and absorbs our beliefs.

I'd mumbled my way through "The Star-Spangled Banner" often enough without really listening to the words. As a girl I'd read Beverly Cleary's Ramona books and remember Ramona confidently mentioning she would "turn on the dawnzer," as in "dawnzer lee light," which she figured must be a lamp. Like her, I didn't know what the words meant or where the song came from. 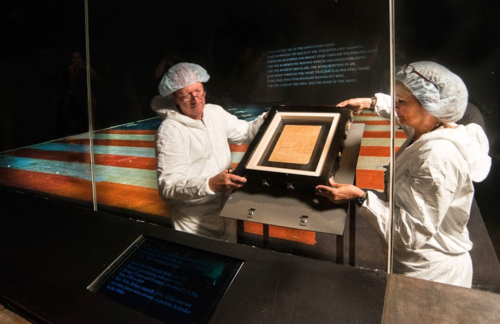 Museum staff install the original manuscript of "The Star-Spangled Banner" lyrics for a special short-term display, uniting it with the flag Francis Scott Key saw at the "dawn's early light." The manuscript is on loan from the Maryland Historical Society.

Living in America today, it's hard to really embrace the idea that the country's fate was once in question. After 9/11, I heard the Pentagon plane might have been trying to find the White House, and I remember thinking what a gut punch that would have been. But in the War of 1812, the British burned the White House to the ground. Back then it sat in the middle of a field, was called the "President's House" and was staffed by enslaved African Americans—but the impact was the same. The stakes were as high at the next battle, in Baltimore, Maryland, when a British attack from land and sea threatened to flatten the city and leave the entire East Coast vulnerable. 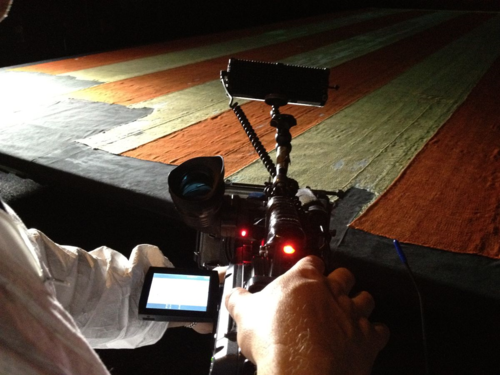 Filming for the Smithsonian Channel's "A Star-Spangled Story: Battle for America"

Before that battle, when Americans thought of patriotic icons, they thought of the eagle, Lady Liberty, or George Washington. The American flag was just a utilitarian marker. Rather than proudly declaring "home of the free," it stated, in monotone, "this ship is American." You can't just sew up a big piece of fabric with stripes and stars and colors representing this and that and declare it central to the heart of the nation. Lightning needs to strike for a symbol to inspire. For the Star-Spangled Banner, the spell was cast in a daring-to-hope glimpse at a moment when all could have been lost.

Coming around a dark corner to see the real thing—ethereal and floating in a pool of black—at the National Museum of American History is actually a little heart stopping. Its size alone takes your breath away. For the Smithsonian Channel special A Star-Spangled Story: Battle for America, we were graciously allowed to film inside the banner's low-oxygen chamber. (Thank you, Jennifer and Suzanne!) With the work lights on, you realize the flag isn't floating at all, but lying on a huge table, gently tilted up at its viewing audience. It's missing great chunks and frayed to threads in places. The colors hang on—a faded red, tea-colored white, and blue with a hint of green. Like any relic, the wear makes it seem even more incredible that it still exists. 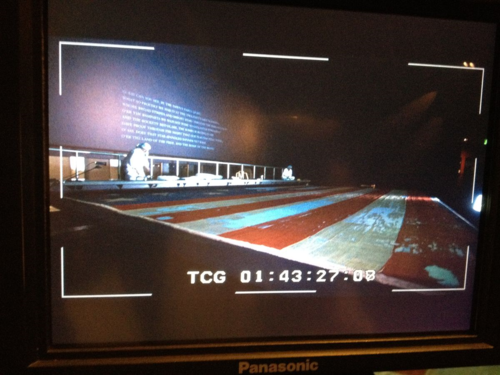 Made by flagmaker Mary Pickersgill and four teenage girls in the summer of 1813, it seems appropriate that today it is cared for by a female curator and conservator. The efforts that have gone into the flag's conservation—cleaning up and stabilizing it—and exhibition involved a large, dedicated team spanning the course of a decade. In fact, the only textile that may come close to this one in terms of expertise, research, and scrutiny is the Shroud of Turin. Appropriate, perhaps, because the Banner is also a mystical symbol of faith.

An improbable series of events led to the moment when the Star-Spangled Banner inspired the words that became the National Anthem. Equally unlikely is its survival over two centuries. Far out in the distance of time, I hope that this symbol, forged in the light of the good ol' dawnzer, will yet wave.

Molly Hermann is a producer/director/writer for the Biscuit Factory. The Smithsonian Channel documentary A Star-Spangled Story: Battle for America premieres on Flag Day this Saturday, June 14, at 9:00 PM. 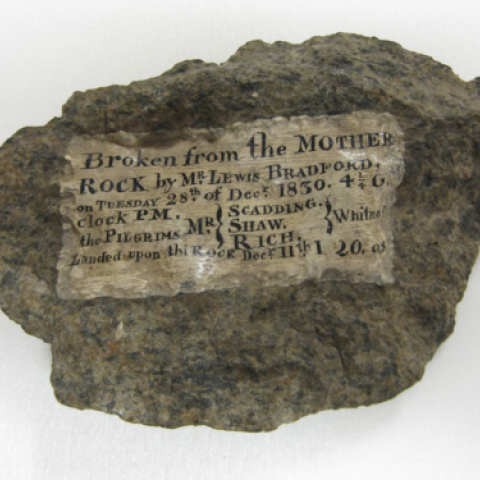 A nation of savers: The impulse to connect with history through objects, buildings, and sites
Intrigued by a piece of charred wood in the museum's First Ladies exhibition, intern Auni Gelles explores the story behind this slice of...