Tetris: Fun in the Cold War?

When one thinks of symbols or images of the Cold War, one might say nuclear missiles, Sputnik, the Cuban Missile Crisis, Khrushchev's shoe, Berlin Wall, Miracle on Ice, Tetris, etc. Wait... Tetris? In 2014, the game turned 30 and celebrated the 25th anniversary of its release onto the Nintendo Game Boy, which launched both Tetris and the Game Boy system into the stratosphere (pun intended). While the core mechanics of the game have more or less stayed faithful for the past 30 years, the way that it was marketed has varied from iteration to iteration. I'll show you how that is with the Amiga and Game Boy versions of the game. 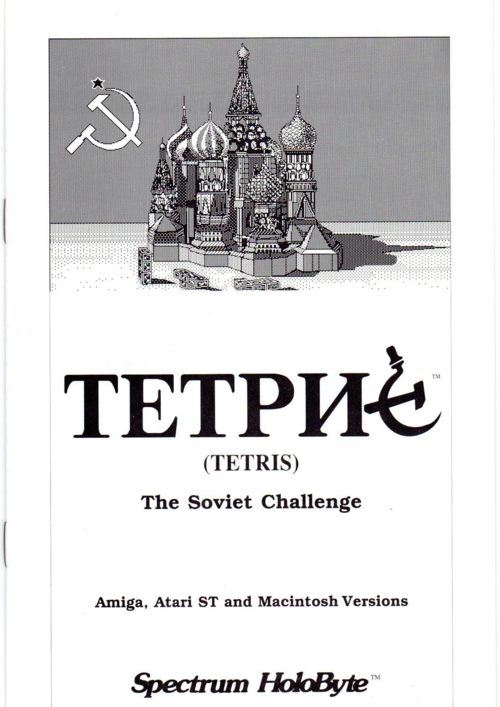 Tetris was designed by Alexey Pajitnov in 1984 while working for Dorodnicyn Computing Centre of the Academy of Science of the USSR in Moscow. It was originally designed for the Electronica 60 computer and was ported to the IBM PC by Vadim Gerasimov. The word "Tetris" is derived from the Greek word for four, tetra, as each of the seven blocks featured in the game has four squares.

The game was one of the first, if not the first, entertainment software exported out of the Soviet Union. This presented problems for those who wanted to license the game since the Soviets had yet to establish a system for licensing intellectual property rights. The licensing saga is detailed in great depth in David Sheff’s book, Game Over, but in the end, Spectrum Holobyte received the PC rights for the United States, and Nintendo won the rights for the handheld and the console version of the game. A Founding Fragments video has been made to cover more of the history of the game. 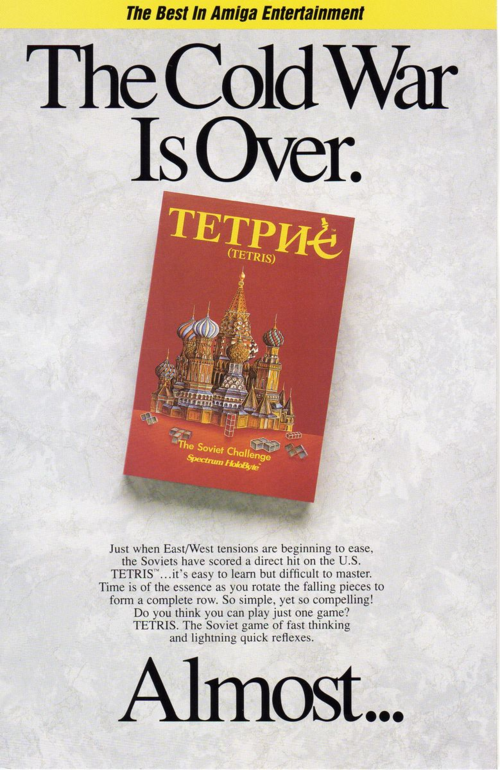 Spectrum Holobyte released Tetris for the Amiga in 1988, and one of the advertisements boldly states that "The Cold War is Over. Almost… With the benefit of hindsight, we would say that it is obvious that the Cold War was indeed over. However, at that time, the Soviet Union was undergoing shocking changes under the leadership of Mikhail Gorbachev, who was chosen as the General Secretary of the Communist Party in 1985. Gorbachev instituted Perestroika, which was the reforming of the Soviet political and economic system. That combined with Glasnost policy reforms which promoted openness and transparency instituted a new era of freedoms for their citizens. The USSR was also retreating from Afghanistan in 1987 and would not completely withdraw until 1989. The Berlin Wall would begin to fall in 1989. There was a sense of finality to the Soviet Union. 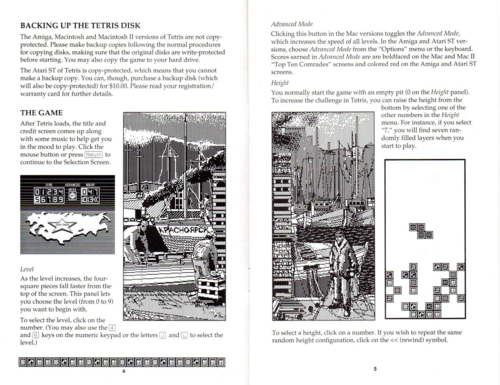 Two pages in the instruction manual that show the select screen with the USSR outline and an image of Russia that surrounds the gameplay field.

Yet the marketing slogan "The Cold War is Over. Almost..." attempted to stir the embers of the Cold War tension. Showing Saint Basil's Cathedral and the Tetris title in its Russian alphabet with a sickle added to the last letter invoked Russian imagery to make it clear that this is a Russian game. It is proclaimed to be "The Soviet Challenge," and you accepted the challenge when you clicked on the USSR to start the game. Once in the game, you randomly received an image of the Soviet Union that appeared along the side, such as a Russian cosmonaut in space looking at Earth from the space station Salyut, a scene in a fishing ship yard, or even the Miracle on Ice game. When the Tetris game ended, you were taken to a high score list of the "Top Ten Comrades." 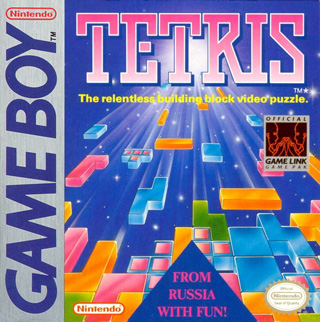 The box for the Game Boy version of the game

The Game Boy version of Tetris was a stark change from the original Amiga version. The founder of Bulletproof Software, Henk Rogers, befriended Pajitnov while he sought to obtain the handheld license. I suspect it was a combination of this friendship as well as the desire to appeal to a wide audience that toned down the Russian element in the game. The title was in a font that is bold and rigid, seemingly Soviet-like, but was no longer in Russian. From the box, the only indication of its Russian origins was the tagline, "From Russia with Fun." 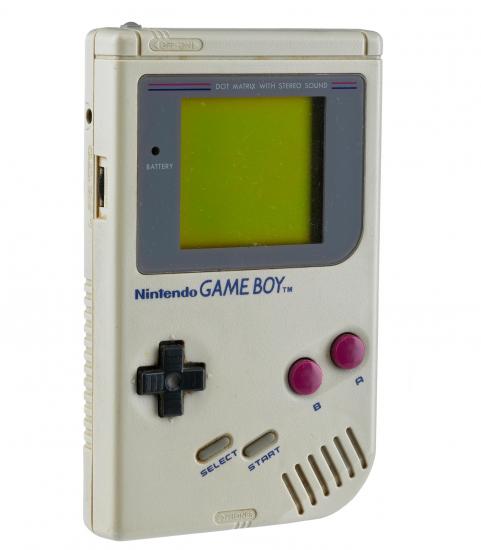 The game's introduction screen still contained St. Basil's Cathedral, but the gameplay screen lacked the Russian images seen in the Amiga version. Despite the lack of visual Russian imagery during the actual gameplay, choosing to listen to Type A while playing the game meant you heard the instrumental version of the Russian folk tune, "Korobeniki" on a repetitive loop. The popularity and simple nature of the tune led it to be known as the Tetris song.

In the Game Boy version of the game, as well as the Nintendo Entertainment System version, if a player ended with enough points, a rocket would launch. The higher you scored, the bigger the rocket. Score high enough and you could launch St. Basil’s Cathedral into space.

These two games show how even fun activities are shaped by the fears and realities of international crises and conflict. To paraphrase the historian Raiford Guins, who wrote in his book, Game After: A Cultural Study of Video Game Afterlife, it is not enough to ask "What is Tetris?" but also "When or even where is Tetris?" Doing so will reveal different answers that illuminate how the game is presented and received. As the Soviet Union collapsed and Tetrisbecame a household name, iterations of the game abandoned its Soviet heritage and focused on innovative gameplay and graphics to keep the game fresh. To question "What is Tetris?" today will result in a dramatically different answer and requires putting the pieces together to get the full picture... a lot like Tetris.

Watch our Founding Fragments episode on the history of Tetris here or on YouTube.

Museum Technician Drew Robarge has also blogged about the allure of early video game packaging. Video game fans may also enjoy the story of the Atari game we got from a landfill.