A mother's solace: A letter from a World War I enemy

In 1922, four years after her American son was killed in action in World War I, Sallie Maxwell Bennett received a letter from Emil Merkelbach, a German officer who had fought against her son in the battle that ended his life. 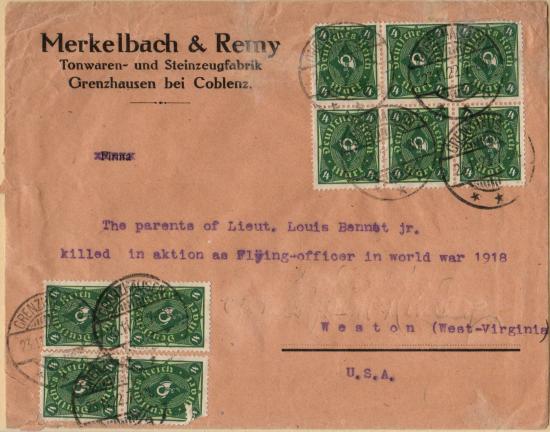 "You will look upon my writing, no doubt, as something unusual, and rightly so, for it is indeed not exactly usual for a former enemy of his own accord to report about his opponent in the World War. I was myself a German officer in the World War." 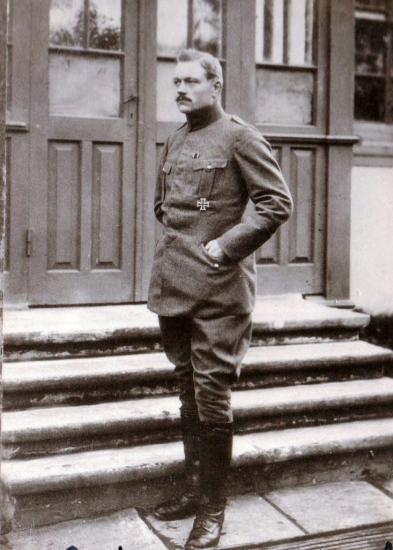 Emil Merkelbach was the leader of a German balloon squadron stationed in occupied northern France in August 1918. Balloons were used by both the Allied and Central powers during the war as a way to observe enemy targets at a greater distance and from behind the front lines, allowing armies to more accurately aim their long-range artillery. Antiaircraft machine guns defended the balloons from the ground and patrolling airplanes protected them from the air. Armies' reliance on balloon observations, and the firepower employed to protect them, made balloons both an important and dangerous target for fighter pilots like Louis Bennett Jr., Mrs. Bennett's son. 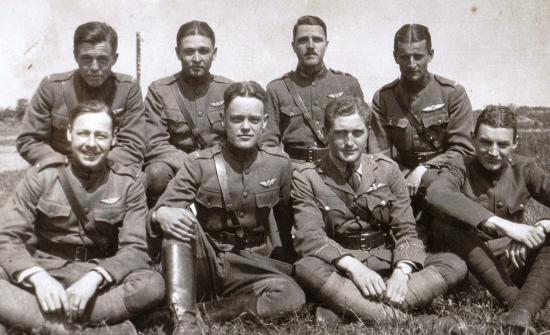 Louis, a Yale student from a prominent West Virginian family, had organized the West Virginia Flying Corps in early 1917 with the idea of training pilots to join the U.S. Army as part of a proposed West Virginia aerial unit. However, when the War Department rejected this idea and required that Louis go through the standard Army training program, he decided instead to join the British Royal Flying Corps (later the Royal Air Force or RAF) in October 1917 with the hope of fighting on the front as soon as possible. He left his studies at Yale in the middle of his Senior year and, after attending flight school in Canada and additional training in England, was eventually stationed in northern France in the summer of 1918.

During the ten days he served in combat before being killed in action, Louis shot down three enemy planes and nine balloons, four of which he shot down in one day. These feats not only earned him the distinction of being named a flying ace, and West Virginia's only World War I ace, but also placed him among the top of all World War I flying aces. Merkelbach saw Louis's impressive skill and total fearlessness first-hand on the battlefield, which he remembered years later and which eventually prompted him to write to Mrs. Bennett. 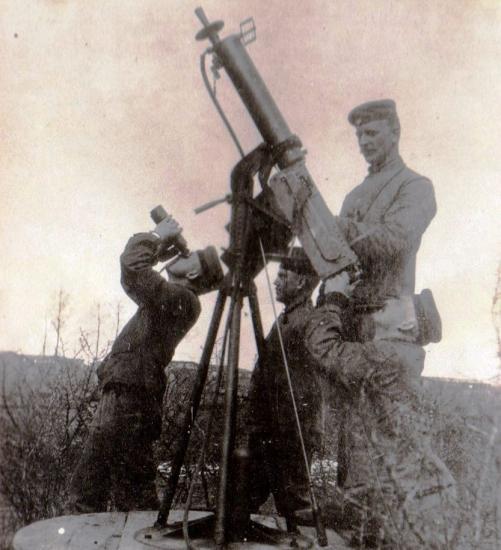 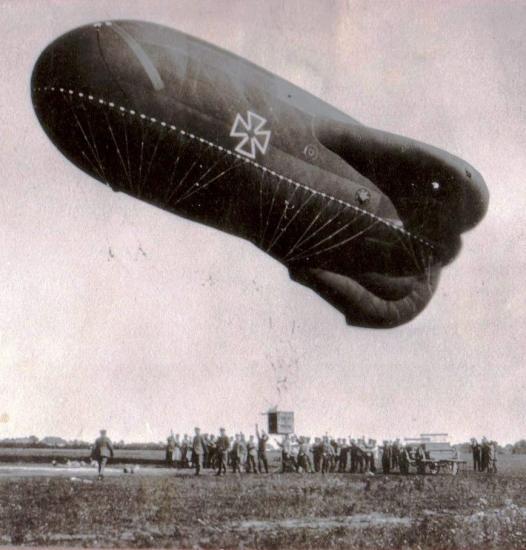 "[I] had an opportunity to admire the keenness and bravery of your son; for this reason I should like to give you the following short description [of Louis's final battle]. . . . I had been up several hours observing, and was at a height of 1000 meters. Over the enemy's front circled continuously two hostile airplanes. . . . I immediately gave the command to my men below to haul in my balloon. . . . When still about 300 meters high, I saw [another] German balloon . . . plunge to earth burning. At the same moment I saw the hostile flyer (Louis) come toward my balloon at terrific speed, and immediately the defensive fire of my heavy machine rifles below and of the anti-aircraft guns began; but the hostile aviator did not concern himself about that. . . . [He] opened fire on me. . . . I saw the gleaming fire of the missiles flying toward me, but fortunately was not hit. The hostile machine was shot into flames by the fire of my machine guns. The enemy aviator tried to spring from the aeroplane before the latter plunged to the ground and burned completely."

Merkelbach ordered the ambulance corps to attend to the "brave and severely wounded enemy." Louis was unconscious and severely burned. Both of his legs were broken, and he had a bullet wound in his head. He died just hours later in a German field hospital on August 24, 1918. The Germans buried him with military honors in an unmarked grave.

"A bold and brave officer had met his death." 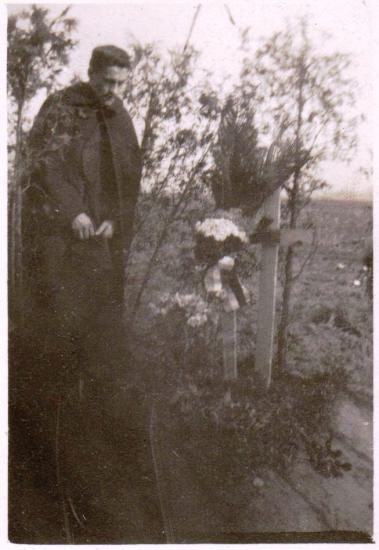 Back home in West Virginia, four days after her son's death, Mrs. Bennett received a telegram from the Secretary of the British Air Ministry informing her that Louis was missing in action. She immediately wrote to her contacts in Europe offering a reward for more information and promising that she would spare no expense to locate the body if he had been killed. Having lost her husband to unexpected illness only weeks earlier, Mrs. Bennett spent a desolate and difficult two months waiting for word of her son. While she continued to work her contacts in Europe to try to locate Louis, she received a number of conflicting accounts from members of his squadron, some stating that he had been taken as a prisoner of war, some stating that he had been killed.

In the midst of all of this, she was also struggling to help settle her late husband's estate and became gravely ill with the "Spanish flu" that was sweeping the globe in a deadly pandemic. Finally, at the end of October 1918, she received official confirmation from the American Red Cross that Louis had been killed in action two months earlier. Although conflicting reports stated that he was buried in either France or Belgium, at last she knew that he was gone.

Mrs. Bennett spent the next several months attempting to travel to Europe to locate Louis's grave, first using her influential contacts to obtain a passport and, once in England, to gain permission to travel to France. Finally, in March 1919, with the help of the U.S. Army, the American Red Cross, and the local villagers, she found herself standing at his unmarked grave, number 590, in a military cemetery in Wavrin, near Lille in northern France. She had finally found her son. 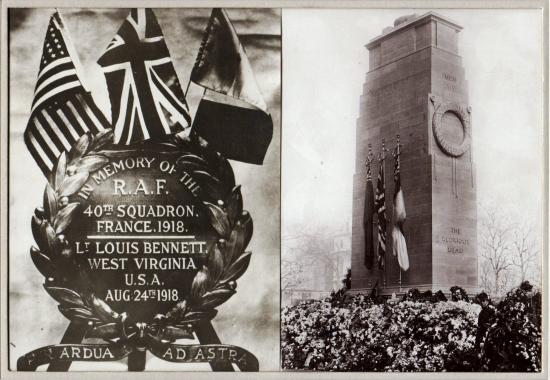 Despite his distinguished combat service, Louis Bennett Jr. never received any service awards from either the British or American governments. In an attempt to right this wrong Mrs. Bennett spent the rest of her life honoring her son's memory, eventually erecting memorials in three different countries. The first memorial was completed in 1919 when she rebuilt the church in Wavrin, France where Louis was buried. The church and town had been utterly destroyed by the retreating German army, and Mrs. Bennett rebuilt the church in dedication to her son's memory on the one-year anniversary of his death. The rebuilt church was also her way of thanking the local curate and villagers who had not only helped her locate Louis's grave, but had helped her smuggle his remains out of the military cemetery, in direct violation of French law, so he could eventually be laid to rest in West Virginia.

The memorials continued in 1922 with a stained glass window in Westminster Abbey overlooking the Tomb of the Unknown Warrior. Dedicated to Louis and to all members of Royal Flying Corps who died in World War I, the window features Archangel Michael, the patron saint of airmen, looking down at Louis, who is depicted as an angel holding a shield. In 1923 she donated a 16th-century Flemish tapestry in honor of Louis to St. Thomas's Church in New York City, where he had been confirmed as a boy. 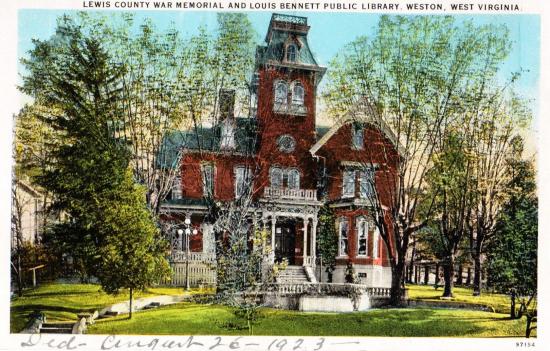 In 1922 Mrs. Bennett donated the family's mansion and extensive collection of books to Lewis County as a war memorial and public library in honor of her deceased husband and son. The Louis Bennett Public Library opened in 1923 and is still in operation today. Mrs. Bennett also had the local airport renamed in Louis's honor and established a memorial organization that met every year in Weston on the anniversary of Louis's death to honor his memory. On Armistice Day in 1925, she unveiled The Aviator, a seven-and-a-half-foot-tall bronze sculpture sitting on a granite base. Sculpted by Augustus Lukeman, the sculpture features Louis in uniform with wings on his back and is dedicated to all Americans who lost their lives in World War I. The pedestal bears the inscription, "And thus this man died, leaving his spirit as an example of able courage, not only unto young men, but unto all the nation." 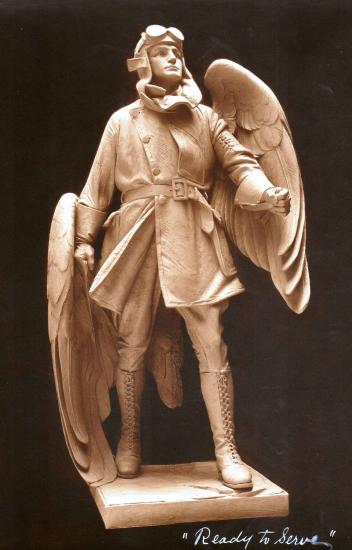 Although never given an official award for his service, Louis Bennett Jr.'s courage and skill clearly inspired those around him to honor his memory in their own way: from the enemy German army that buried him with full military honors, to his mother who memorialized him across multiple countries, and finally to Emil Merkelbach, an enemy officer, who was inspired to write a glowing, respectful letter in memorial four years after they had fought on the battlefield.

"I hope that the foregoing lines, a memorial to your son, will be received by you living—he was my bravest enemy. Honor to his memory. With respect, Emil Merkelbach"

Patri O'Gan is a project assistant in the Division of Armed Forces History. She recommends reading more about the Bennetts. She has also blogged about the creative use of cars, planes, and trains in the struggle for woman suffrage.