The election of 1864 as seen through the Harry T. Peters "America on Stone" Collection

As we near Election Day, political cartoons are inescapable. Satirical cartoons continue a tradition of political printmaking that has been part of American political life since pre-Revolutionary times. Political prints and comics experienced a golden age in the late 19th century, during the era of the famed pens of Thomas Nast of Harpers Weekly and Joseph Keppler of Puck. Known for their symbolism, exaggerated caricatures, and satirical commentary, historical prints can provide the modern American with a rich glimpse into the nation's polarized past. This election season, it can be easy to overlook the fact that past presidential contests have been just as partisan and divided, and cartoons and caricatures can help to shed light on public opinion during these past contests. 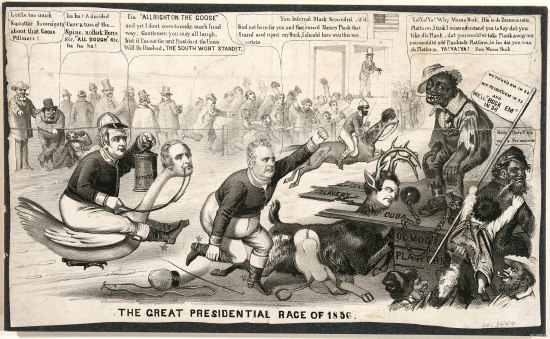 One contentious election of the 19th century that produced a significant output of political prints was the 1864 wartime contest between Republican incumbent Abraham Lincoln and his Northern Democratic opponent, George B. McClellan. Because of Lincoln's iconic status today, it is sometimes easy to forget that he had to run for re-election in the midst of the Civil War. In the North, the war was increasingly unpopular, as was Lincoln himself. "Old Abe" feared that he would lose his re-election—and lose badly. 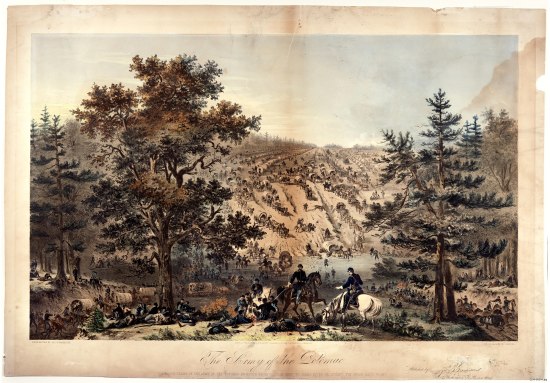 McClellan had been removed from command in November 1862, after refusing to pursue Lee's army following the Union victory at Antietam. In 1864 he was selected as the Democratic candidate for president. The Northern Democratic Party was controlled by a movement within the party known as the Peace Democrats—nicknamed "Copperheads" by Republicans, who compared them to traitorous serpents. These anti-war Democrats favored a cease of hostilities with the Confederacy. McClellan himself identified with the War Democrats, who wished to continue the conflict in order to restore the Union, although without the abolition of slavery. Political images were employed by both Republicans and Democrats to weaken their opponent's positions on the war and abolition.

Editorial cartoons became extremely popular in the months leading up to the 1864 election. Included in weekly periodicals and distributed by political activists, these ephemeral prints were intended to be glanced at and shared, but ultimately discarded. Artists and publishers capitalized on the viciousness of the presidential race, choosing to portray candidates in a negative light. Some printers, in an effort to attract as many buyers as possible, would play both sides of the field, producing scathing images of both Lincoln and McClellan.

To draw voters away from Lincoln, Democratic promoters played up contemporary racist fears of Northern whites, arguing that the abolition of Southern slaves would result in nationwide social upheaval. They pushed groundless arguments that Lincoln was a supporter of "miscegenation"—the derogatory term at the time used to describe interracial mixing—believing that such rumors would isolate Lincoln from biased Northerners. The World, a Democratic newspaper in New York, had openly attacked Lincoln's Emancipation Proclamation. In 1864 The World published a series of political prints depicting interracial couples and families, arguing that the re-election of Lincoln and the feared racial mixing would go hand-in-hand. 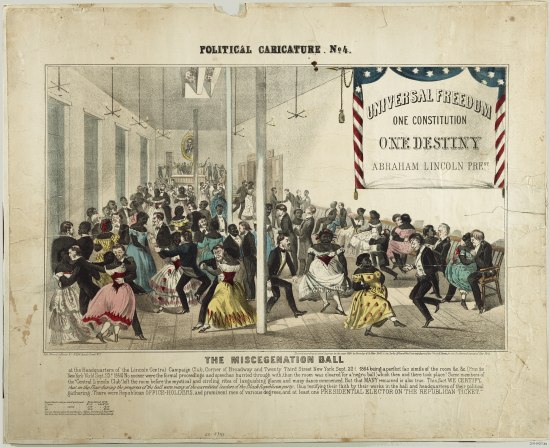 Anti-Copperhead cartoons viciously attacked McClellan, or "Little Mac," criticizing his war record and blaming the prolonged length of the conflict on his overly-cautious military decisions. They also tried to instill a patriotic fervor within viewers, advocating for the need of the reservation of the Union and condemning the prospect that the thousands of perished Union soldiers would die in vain. 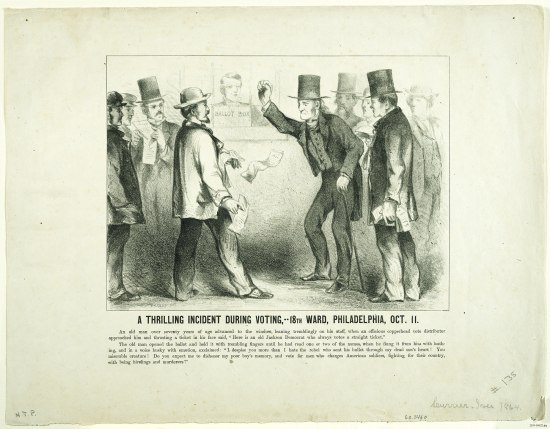 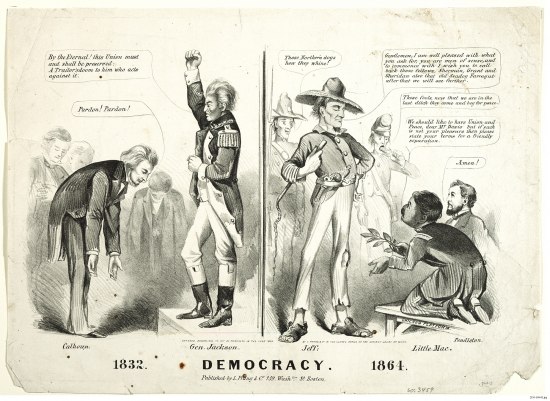 Of course, Lincoln did win his bid for re-election in 1864, running on the ticket of the National Union Party, which attracted votes from both Republicans and pro-Union Democrats. General William T. Sherman's capture of Atlanta in July 1864 and sharp divisions between the War and Peace Democrats helped ensure the incumbent's victory. Lincoln's second inauguration took place on March 4, 1865. A month later, Lee surrendered his Army of Virginia to General Ulysses S. Grant at Appomattox Courthouse, Virginia, on April 9. Lincoln was assassinated five days later. While Lincoln was from then on imagined as a martyr for the nation, McClellan's wartime reputation shadowed him for the rest of his life and even after his death.

This final, unattributed anti-McClellan cartoon depicts the disgraced general attempting to dig his way into the White House—a reference to his cautious demeanor and predisposition to construct trenches rather than engage in necessary offensives. He is blocked by a ghostly apparition of Liberty and a legion of skeletal Union soldiers who had fallen in battle. Liberty admonishes him for allowing "these my Children to die in the swamp and on the Battlefield." For this misdeed, she instructs him to instead dig his own grave and be forgotten. 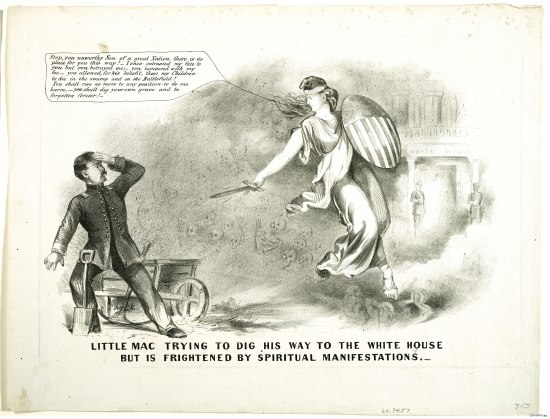 The lithographic prints featured in this blog all belong to the Harry T. Peters "America on Stone" Collection.

Jacob Kowall is currently an undergraduate student at the College of Wooster in Wooster, Ohio. He completed an internship in the Department of Home and Community Life under curator Debbie Schaefer-Jacobs and is assisting in the online publication of the Harry T. Peters "America on Stone" Civil War prints.

Posted in From the Collections, Civil War, African American History 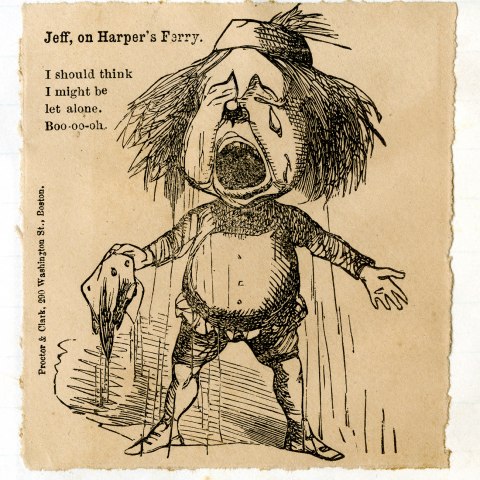