Ever wonder what it feels like to discover an object not seen for over 1,000 years? Ever been curious about the ancient world? Beginning with Etruscan coinage, Melissa Ludke explores the National Numismatic Collection (NNC) through the eyes of an archaeology student by rediscovering objects and making historical and archaeological connections.

As a trench supervisor excavating on an Etruscan site located in the hills of Tuscany, I felt a certain excitement about uncovering history with my bare hands that has not been seen since the 7th century BCE. It is a completely unique experience. Once you get past the dirt in your face and blistered fingertips, you earn that gratifying moment when you discover an object that has been lost until now.

While working alongside the curatorial team on the new numismatics gallery opening in July 2015, I decided to take a closer look at the National Numismatic Collection. As a soon-to-be graduate student in classical archaeology, I sought a new approach to understanding the ancient collection and connecting these monetary objects—once used and held very similar to the money jangling in our pockets today—with their cultures.

The Etruscan civilization primarily originates in an area within Italy called Etruria, which we know today as the region of Tuscany. This civilization existed before the Romans and is contemporaneous with the Ancient Greeks, spanning roughly the 11th century BCE to the 2nd century BCE. As with almost any other civilization, they had their own language, religion, architecture, and economy, including their own system of coinage, which was primarily minted in the Etruscan cities of Populonia, Tarquinia, Vetulonia, and Volterra.

Similar to the Roman Aes Rude, the Etruscans used bronze ingots as a precursor to coinage. Cast bronze coinage was produced around the 3rd century BCE, with a variety of weight standards, contemporaneous with the circulation of the Aes Signatum, specifically the "ramo secco" type and the Aes Grave. In addition, Greek coinage also circulated in Italy at this time, primarily among Magna Graecia in southern Italy.

Early silver coinage began with the first issue minted and circulated by Vulci and Populonia in the 5th century BCE followed by three issues in the 4th century BCE, although the bulk of silver coinage emerged within the 3rd century BCE, along with small amounts of gold coinage. These coins were also produced in roughly three separate phases, with the majority having been minted in Populonia and Vetulonia, consisting of various units marked on either the front or reverse of the coin.

Within the National Numismatic Collection, there are approximately twelve coins of identified Etruscan coinage, the majority of which are from Populonia. The industrial center of Populonia was an Etruscan city situated on the coast, whose currency was typically marked by its names of "Pupluna," "Pufluna," and "Fufluna," along with several types of mythological iconography. The NNC has two depicting creatures thought to be part of the Etruscan religion and identified as demons, which exist in between immortals and mortals. Demons were not considered evil, but instead were either symbols of death who escort souls to the Underworld or seen as protectors of human beings. 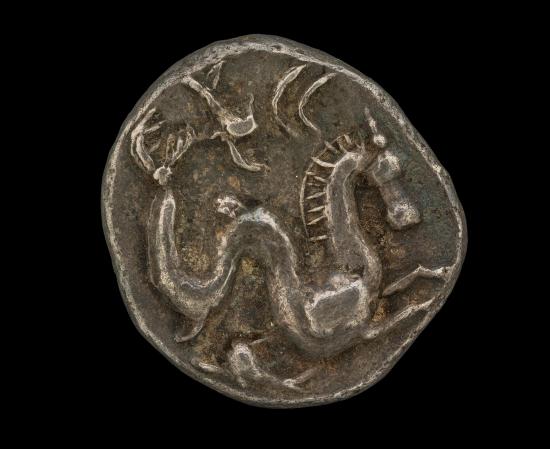 A hippocampus is the combination of a horse and a fish, widely present as a demon throughout Etruscan religion. For a coastal city like Populonia, it would not be uncommon to find this type of animal in an area circulating around a seafaring culture. At the same time, the gorgon type was in circulation and, similar in appearance to well-known Medusa, was thought to ward off evil and is often depicted with snakes or wings. 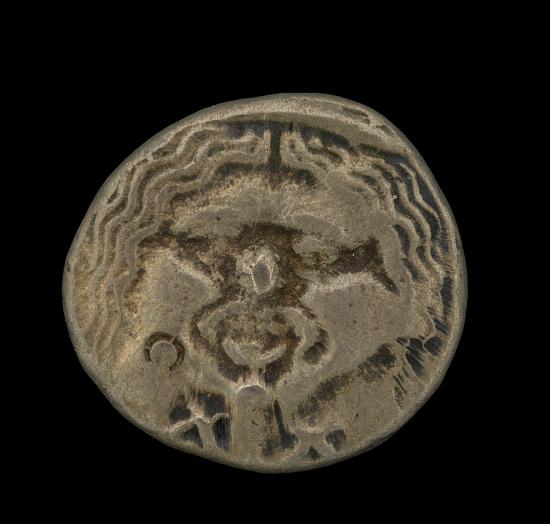 While this is a small sampling of the NNC's large collection of ancient coinage, these objects are important to our understanding the development of money in the classical world and offer a glimpse into some of the early history of currency and ancient economies. With the combination of archaeology and numismatics, much can be achieved merely by excavating the National Numismatic Collection cabinet by cabinet and drawer by drawer.

Melissa Ludke is a project assistant in the National Numismatic Collection and will be a graduate student at Florida State University in the fall.