The fabric of the frontier: How textiles help us understand the American West

One of the most fascinating objects that came to my attention during my time as a Smithsonian postdoctoral research fellow is a rather unassuming leather-covered book in the textiles collection. 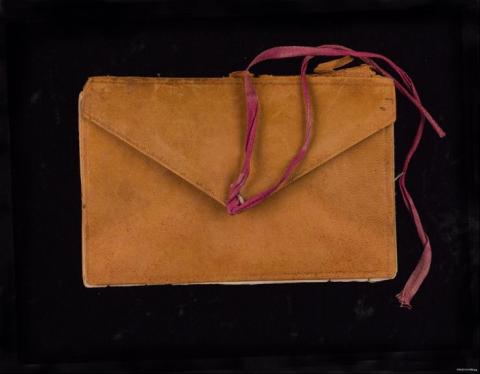 This object will be on view in the new American Enterprise exhibition, opening in 2015

Pasted onto the pages of the book are swatches, or small samples, of textiles along with written information about the fabrics. All 50 of the swatches are simple woven textiles, the fanciest designs being a few striped and plaid pieces. 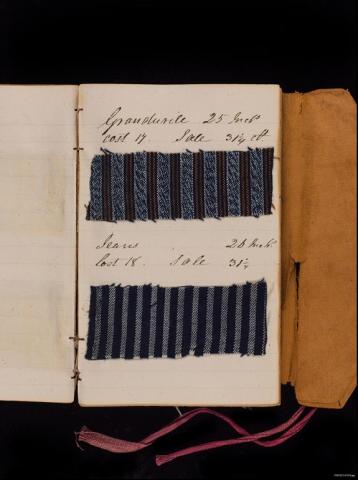 Fabric sample books like this one are a great resource for textile scholars. This particular book is dated March 4, 1834, and was compiled at Fort Gibson (present-day eastern Oklahoma) by William West and sent to Secretary of War Lewis Cass.

The 1830s were marked by a series of involuntary removals by the federal government of American Indians from southeastern lands in Georgia, Mississippi, and Alabama to what was then called Indian Territory and is today the state of Oklahoma. The Cherokee, Muscogee, Seminole, Choctaw, and Chickasaw tribes were forced to abandon their lives and the communities they had built to make way for speculators who quickly bought up these lands and turned them into cotton plantations supported by enslaved labor. Some people from these tribes, particularly the Cherokee and the Seminole, had been relocating themselves to the Indian Territory region since the 1810s, where they interacted with tribes such as the Osage who already lived in the area. But the vast majority of these peoples endured forced marches between 1831 and 1838 on a route known as the Trail of Tears.

The U.S. military posted sutlers at western forts, including William West at Fort Gibson. Sutlers were civilians who sold provisions to the soldiers. There was little control over the active trade from military sutlers to private citizens and Americans Indians. American Indians arriving in the region in great numbers and without many of their belongings were a ready market for the frontier forts. Military outposts became gathering places for all kinds of people living in the sparsely settled frontier. Fort Gibson was also the main gateway to points further west and north for travelers passing through. Because frontier settlers had few options for purchasing goods, rampant mark-ups were a fact of life. Selling products to American Indians at even higher prices happened frequently enough that officials back in Washington were considering further legislation enforcing the prices of goods sold at the forts. William West put together this sample book as an example of trade goods and pricing at Fort Gibson.

Buried in the middle of the book among the other samples is one labeled as "heavy negro cotton." 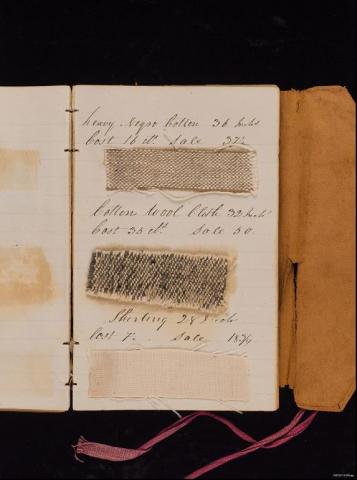 The phrase "negro cloth" was used to market cheap textiles as clothing for enslaved people of African descent. These fabrics were made in several colors, styles, and fibers, and they were all extremely cheap and of poor quality. In the United States, northern textile manufacturers cornered the market on "negro cloth" sold to the southern states with the help of taxes and federal contracts. These factories sold the same fabrics in the North to lower-class people and to the federal government, who then sent them to the western forts. Each of these three markets—North, South, and West—were sold the same cheap fabrics using different names. Fabrics sold in the North and the West as "jeans" or "shirtings" would be sold in the South as "negro cloth."

If "negro cloth" was only marketed to areas where it was meant for use by enslaved people, then why was it being sold at Fort Gibson? This is where my research on southern enslaved peoples' clothing intersects with this object. I believe the sample of "heavy negro cotton" in this book was sold to enslavers in the region buying clothing for enslaved people. Many different people were living within trading distance of Fort Gibson in the mid–1830s, including white settlers who brought enslaved people west, particularly to cotton plantations in Texas and Louisiana. Some of the American Indians forced off of eastern lands brought enslaved people with them to the Indian Territory.

I find this fabric sample book compelling because it shakes up our perceptions of how the history of the American frontier and American slavery are connected. We often forget that the oldest Old West included lands that today make up Mississippi and Alabama. After decades of bloody wars between frontier American citizens and American Indians, resulting in the latter's forced migration to Indian Territory, these lands were opened for settlement in the 1830s. They became cotton plantations, places where thousands of enslaved people cleared lands, formed communities, and made enslavers incredibly wealthy. Some of our early western heroes, including Daniel Boone and Jim Bowie, owned slaves. And it was slave-raised cotton that was shipped from south to north and made into "negro cloth," which was then sold to the federal government and shipped west again. There it ended up on the backs of the enslaved people who helped build and settle the expanding American frontier.