Continuing our World War I series, discover an incredible portrait of a war hero.

During World War I, several French textile manufacturers focused on making souvenir silk pictures that soldiers serving in France could purchase as small mementos to send home to their families. These postcard-sized pictures often depict Allied generals, including Marshal Ferdinand Foch, who was one of America's favored French war heroes. But the quality of these small pictures is generally not very good—in modern terms, not enough pixels or dots per inch—so the images are a little coarse. But in the National Museum of American History's textiles collection is an exceptionally finely detailed portrait in silk of Marshal Foch, of a size suitable for framing. 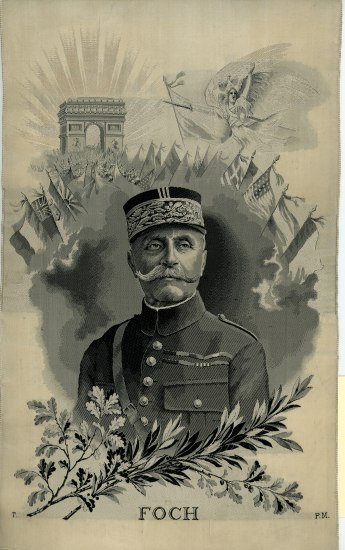 The jacquard-woven silk picture in black, white, and shades of gray depicts Foch, general and hero of World War I and Supreme Commander of the Allied Forces in France at the end of the war, with celebratory and commemorative details.

Foch, in uniform, is at center. In the foreground at bottom are sprays of oak and laurel branches. Above and behind him is an array of Allied flags. The Arc de Triomphe (originally built in Paris as a monument to those who fought in the Napoleonic Wars) is at upper left, and a female allegorical figure of Liberty is at the upper right. The single word "Foch" is at center bottom, and the initials "P. K." (either the manufacturer or the artist) are at lower right. The marshal is depicted wearing a cap ornamented with bands of oak leaves. The Field Marshal's oak leaf bands, worn only by Foch, inspired an American silk company's tribute in late 1918 to the French general. The printed dress silk was ornamented with stars and oak leaves in a stripe layout, in golden browns against a dark blue ground. 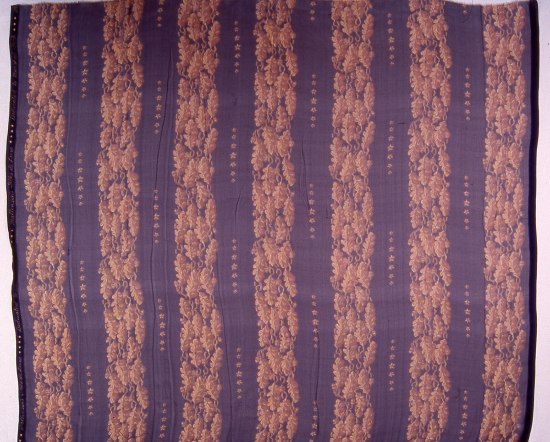 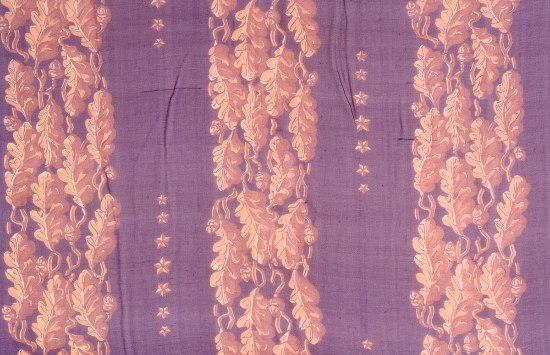 Silk pictures are commonly known as "Stevengraphs" after the manufacturer who first began making them in Coventry, England, in 1862. Thomas Stevens wove narrow silks on the jacquard loom, which allowed for individual control of the threads and therefore very complex designs. These pictorial images were used for bookmarks or postcards; larger ones were framed as artwork. Stevens had many followers and competitors, in Coventry (which had been the most important silk ribbon manufacturing center in Britain until economic difficulties and changes in import tariff law affected profitability), on the European continent, and by the 1890s, in the United States. 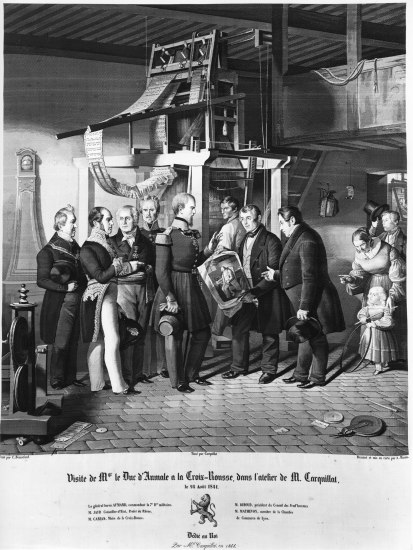 What we know colloquially as the "Jacquard loom" is actually a loom attachment that mechanized the manufacturing process of textiles with complex woven patterns. Developed by French inventor Joseph Marie Jacquard in about 1804, the attachment was controlled by punched paper cards. Theoretically, each individual warp thread set on the loom for a length of fabric could be controlled individually through the action of the heddles (sets of cords or wires which controlled the warp, or fixed, threads on a loom) against the cards—the heddle was either lifted through a punched hole or stopped by the paper card. It was an automation model that would eventually lead to modern computers. 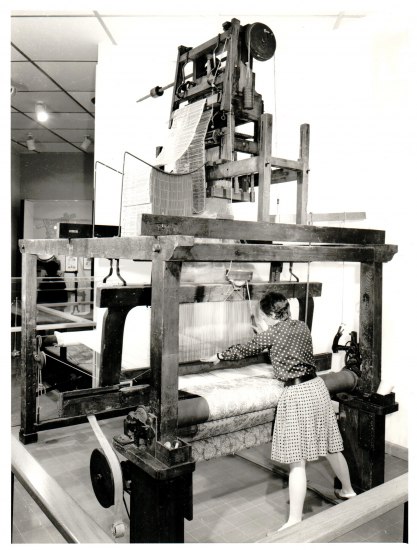 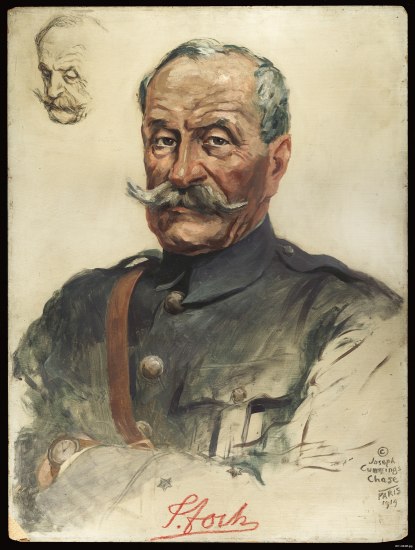 The initials "PK," found on this image of Marshal Foch, have not yet been found to correspond with any particular maker, in France or elsewhere. It is even possible that one of the many important American silk ribbon mills located in or near Paterson, New Jersey, such as Smith & Kaufman, Pelgram & Meyer, Phoenix Silk Mfg. Co., or Johnson, Cowdin & Co., produced this portrait in his honor. More research remains to be done, and we welcome readers’ comments to help us solve this mystery.

Madelyn Shaw is a curator in the Division of Home and Community Life. She has also blogged about historical fabrics in Work War I.