Remember the Lusitania: 3 pieces of World War I propaganda

One hundred years ago on May 7, 1915, the Lusitania was sunk by a German U-boat off the southern coast of Ireland, killing 1,195 of the men, women, and children on board. Of those killed, 123 were Americans. While Europe was already embroiled in World War I, America was still a neutral country and hadn't yet officially entered the war, although a number of American men and women had joined the war effort through volunteer organizations or by enlisting in the Allied armed forces. The American public and Congress, however, were divided as to whether or not the U.S. should officially join in the fighting. The attack on the Lusitania, a passenger ship with civilians on board, by a military submarine signaled the end of the more "civilized" warfare of the 19th century. It also proved to be a powerful propaganda tool for turning American public opinion against Germany and in support of joining the war. 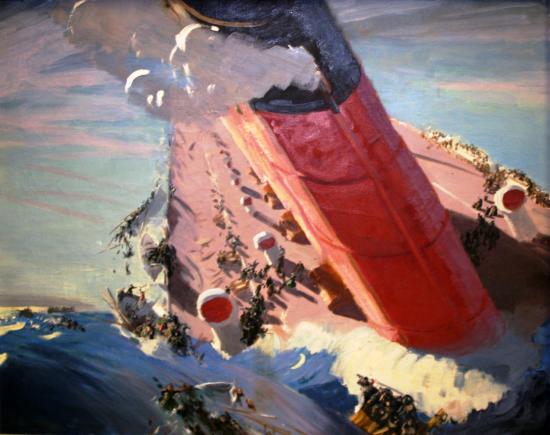 The Lusitania was a British ocean liner operated by the Cunard Lines and was one of the largest and fastest passenger ships in the world, at 787 feet long with nine passenger decks and an average speed of 25 knots. Funded by the British Admiralty, she was launched in 1906 with the understanding that she could be used as an auxiliary cruiser for the Royal Navy during times of war. Thus on May 1, 1915, in the middle of World War I, she left New York and set sail across the Atlantic for Liverpool, England, carrying both passengers and war munitions for the Admiralty.

On the day of her launch, the Imperial German Embassy published a notice in American newspapers warning travelers of the grave danger of sailing on the Lusitania. Britain and Germany were at war and the Lusitania was sailing into waters that had been declared a war zone. German submarines had vowed to fire on any ship flying a British flag and had already sunk several British merchant ships. Although some of the passengers and crew were alarmed by the warning, they set sail anyway, perhaps believing that the Lusitania's speed would keep them safe.

On the afternoon of May 7, the Lusitania approached the southern coast of Ireland, without a naval escort, where German U-boats were known to be active and had recently sunk three ships. Due to fog, Captain William Turner was forced to slow the Lusitania down. Contrary to the Admiralty's instructions for avoiding U-boats, the Lusitania was sailing at less than top speed, in a straight line, and close to shore, rather than zigzagging in the open water where she could pick up speed.

When she passed in front of the German submarine U-20, the Germans fired a torpedo which hit her hull just below the waterline and caused an internal second explosion moments later. As the crew scrambled to launch the lifeboats, they were impeded by the severe tilt of the sinking ship. They managed to launch only six boats for the 1,959 people on board. Within 18 minutes, the Lusitania was sunk. Alerted to the disaster by theLusitania's distress signal, rescue ships immediately launched from Ireland to render aid. However, for many passengers help came too late, and in the end only 764 people were saved while 1,195 were drowned or died of hypothermia in the cold Atlantic water.

As news of the attack on the Lusitania spread around the world, emotions and opinions surrounding the sinking generally fluctuated depending on nationality. With England and Germany each advocating for the justness of their side, the Lusitania became a powerful propaganda tool for both sides in the build-up to America joining the war. One object in our collection that demonstrates this complex story is a replica of the medal commemorating the sinking of the Lusitania by German artist Karl Goetz. 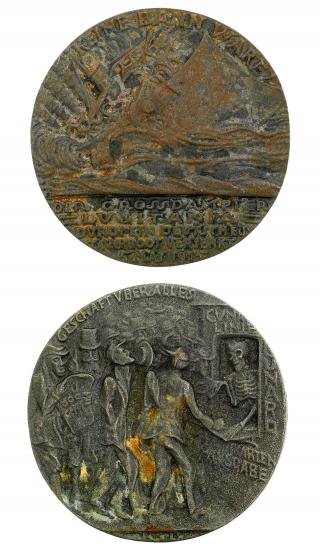 The original medal was made by Goetz shortly after the ship sank. Angered by the Cunard Line's audacious decision to sail a passenger ship with munitions on board, Goetz channeled his feelings into an artistic satirical message and displayed it on a medal. The medal depicts the sinking Lusitania with munitions on deck under the heading "No Contraband Goods!" on one side. Germany held the position that as the Lusitania was sailing with munitions on board she was a hostile enemy ship and they were within their rights to fire on her.

On the other side of the coin, a skeleton representing death stands at a Cunard Line booth handing out tickets to a crowd. Goetz even includes a man reading a newspaper headline that translates to "U-Boat Danger," referring to the newspaper warning to passengers that had been published prior to the Lusitania sailing. The message "Business Above All" floats above the scene, a statement about Cunard Line's disregard for passenger safety in favor of making a profit. The attitude behind Goetz's medal was characteristic of many German people at this time. 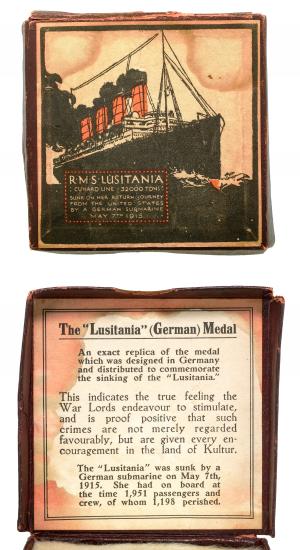 As Goetz's medal circulated, the British got their hands on it and saw the opportunity for propaganda and the chance to inflame British and American anti-German sentiments. Reproductions of the medal, like the one in the museum's collection, were made in Britain and distributed along with a special box that included a document stating Britain's side of the story:

An exact replica of the medal which was designed in Germany and distributed to commemorate the sinking of the "Lusitania."

This indicates the true feeling the War Lords endeavor to stimulate, and is proof positive that such crimes are not merely regarded favourably, but are given every encouragement in the land of Kultur.

Although Goetz corrected the incorrect date on newer versions of the medal, the anger had already settled into the minds of Germany's opponents. Britain took advantage of the situation to imply that Germany had planned the attack on the Lusitania. The British government went further and roundly denied the existence of contraband munitions on board the Lusitania at the time of her sinking. Although originally a German expression of wartime sentiments, Britain appropriated the object to vilify German "kultur," culture and civilization as idealized by the exponents of German imperialism.

Almost two years after the attack on the Lusitania, on April 6, 1917, the U.S. declared war on Germany. Although many events led to the U.S. rejecting neutrality and joining World War I, the sinking of the Lusitania was a crucial moment in helping to sway the American public in support of the Allied cause.

The above video from Smithsonian Channel is also available to view on YouTube.