All I want for Christmas is... an orange juice can, an Uncle Sam toy, and a stereoscope

Heather Paisley-Jones is an education specialist and a member of the exhibition team for the Patrick F. Taylor Foundation Object Project. Like one of Santa's elves, part of her role on the Object Project team is finding just the right objects for the exhibition's teaching collection, which aims to give visitors an up-close experience with authentic objects. While the museum's national collections objects are carefully preserved and protected so that they last forever, the teaching collection is meant to be handled by visitors or viewed outside of a case and can withstand more use.

Intern Caitlin Kearney asked Heather a few questions about her experience tracking down objects on the exhibition team's teaching collection wish list. Object Project, which opens in July 2015, will explore the interplay between people, innovative things, and social change that shaped everyday life in America. 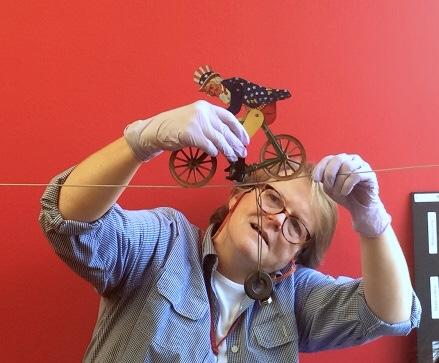 Caitlin: You have a pretty unique role on the Object Project team. Can you describe what you do?

Heather: I've been procuring objects for the teaching collection that are going to be featured in the exhibition or on the museum's interactive carts. Mostly, that process has involved diligently looking online every day until I find what the team is looking for—especially if we're looking for something that's really rare.

Before Object Project, I was one of the original developers of the Hands on History Room (1985–2004), which was the museum's first space dedicated to encouraging visitors to discover history through object-based activities. It gave visitors the chance to explore objects by using multiple senses, with the goal of helping them get a sense of what daily life was like in the past and begin to see themselves as part of history. I've spent most of my career developing object-based activities. I manage the interactive cart program, so I often find objects for that, too. Our cart-based activities give visitors the opportunity to learn a bit more about a topic by investigating objects and having a personal interaction with a member of the museum's volunteer corps.

For the most part, the objects we purchase for the carts and teaching collection were once a common part of everyday life. So common, in fact, that most examples of them were eventually discarded and replaced by something "new and improved." We're always careful to feature objects that are really sturdy or can be replaced fairly easily. 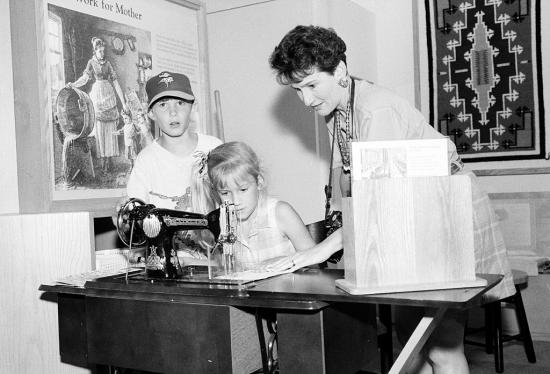 Caitlin: What role does the teaching collection play?

Heather: The simplest way to think about it is that the main role of the museum is to preserve and protect the objects in its care, so that they will always be there for future generations. The role of the teaching collection is to be used by visitors in their hands-on exploration of life in the past. Interacting with the objects in the teaching collection makes the past feel more real to visitors.

In addition to that, there were things that we wanted to feature in Object Project that were represented in the museum's national collection but weren't available because they're either too fragile to be displayed or were being used elsewhere. There were even a few things that the museum's collections didn't contain, like orange juice cans from 50 years ago.

I think that's just the nature of collecting. Sometimes we'll have components of objects in the museum's collection, but not an entire one. It's the innovative things that are collected, but in times of rapid technological change, it's probably really hard to pinpoint exactly what you should be collecting.

Caitlin: Can you tell me more about those orange juice cans?

Heather: The orange juice cans were a real challenge. I think people just didn't think of saving them. Frozen, concentrated orange juice was a postwar era frozen-food success story. Millions of cans have been sold every year since it was introduced, but the empty cans generally ended up in the garbage. So, as you can imagine, finding 50+ year-old orange juice cans was quite a task. I ended up finding 10 of them, and I love the whimsical design of this Whole Sun can. I always try to find out the history of the objects I come across for the exhibition, but no luck with this can. I like to imagine it spent many years on a shelf in the garage of someone like my dad, who viewed every empty can as a container with endless possibilities. 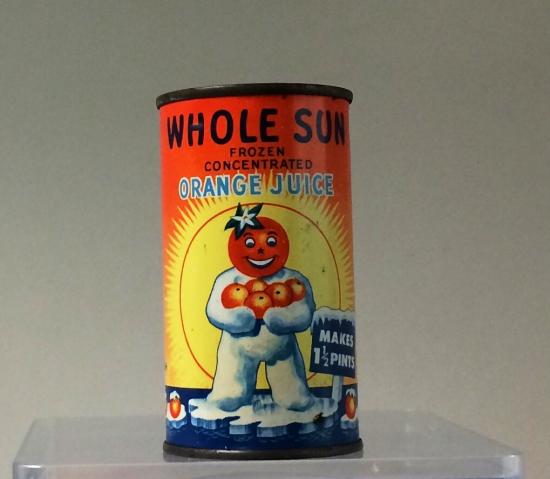 Caitlin: What are some other items you've tracked down for Object Project?

Heather: I found some 1950s kitchen clocks made by Telechron—in four different styles and colors, because we planned to feature four in a display, and we wanted them to be as interesting as possible. Also along the lines of kitchen innovations, we've acquired lots of things related to the first electric refrigerators, including General Electric Monitor Top water bottles and ice trays, and a Hotpoint refrigerator set by Hall China. 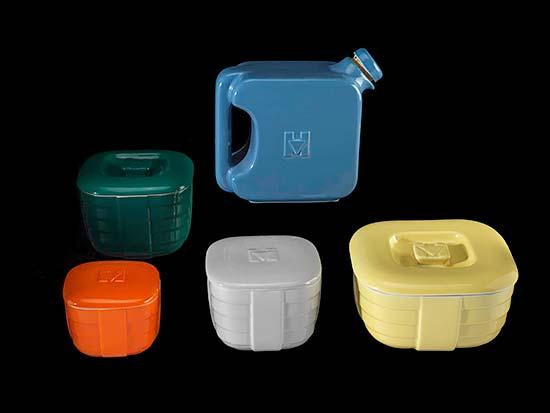 We've gathered many images of people on bicycles, early bicycle saddles, baby seats, horns, bells, and whistles—lots of bicycle things! We also purchased objects pertaining to the League of American Wheelmen, which was the national organization that governed cycle racing and united the hundreds of bicycle clubs from around the country. It was partially responsible for the boom in bicycle ownership from the 1880s to the 1910s. One of my favorite finds is the Uncle Sam string rider toy. I just lucked into that—you see them so rarely. 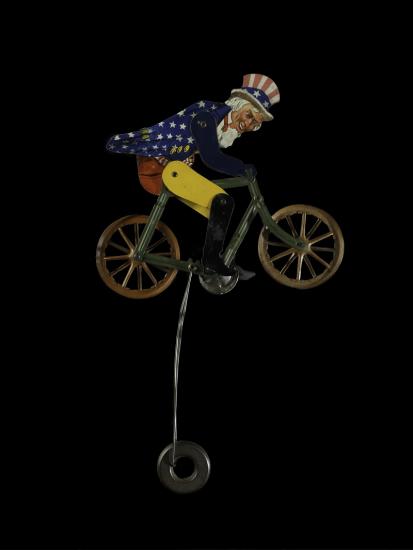 Caitlin: What about the object that got away?

Heather: There were two other toys along with the Uncle Sam string rider, and I had dreams of getting all three. They worked the same as Uncle Sam but one was a policeman, and one was a bicycle racer. But it just didn't work out. That was the big disappointment. Everything else that I've missed I've been able to find again, so I've learned to be a little more optimistic about it.

Caitlin: What discovery surprised you most?

Heather: We spent months looking for a really early stereoscope, a device you look through to make two nearly identical photographs appear to be a single 3D image. It's the earliest one I've seen, probably late 1860s or early 1870s. That was really hard to find, so it was really exciting. It was one of those things where we were about ready to give up because we had hit so many roadblocks. 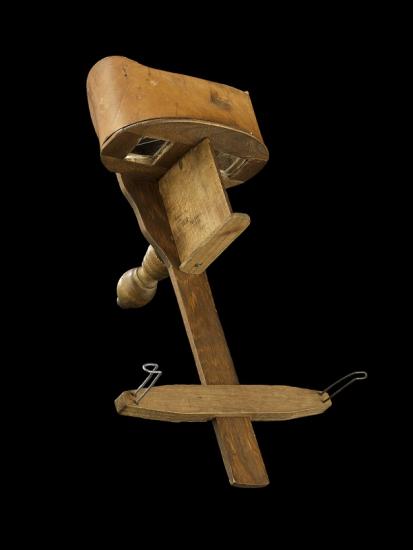 The other thing was the Miss Clairol hair color box. We were trying to scan a picture of the box from a magazine ad, but it looked like a big Lichtenstein with all the dots. And then, a box showed up for sale online. You just have to be diligent and continue to look for things until you find them. 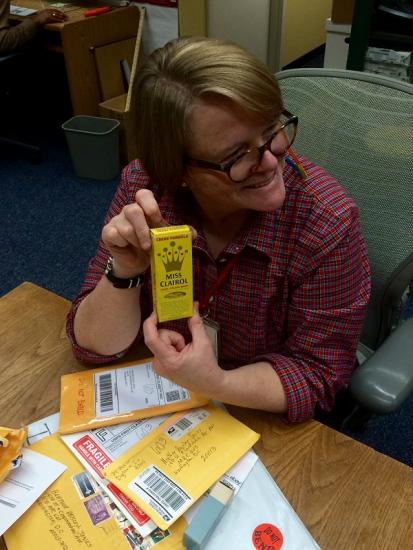 Caitlin: As the exhibition development process comes to a close, what will you miss?

Heather: As somebody said the other day, we're going to be in withdrawal when we're finished getting new objects. Between the fun of finding it and the excitement of opening it, it's like a big treasure hunt.

Caitlin: What's it like when an object finally arrives in the mail?

Heather: Oh, it's very exciting. It's like Christmas. Like when the toilet arrived. I didn't even know what an embossed toilet was before we started looking for one. 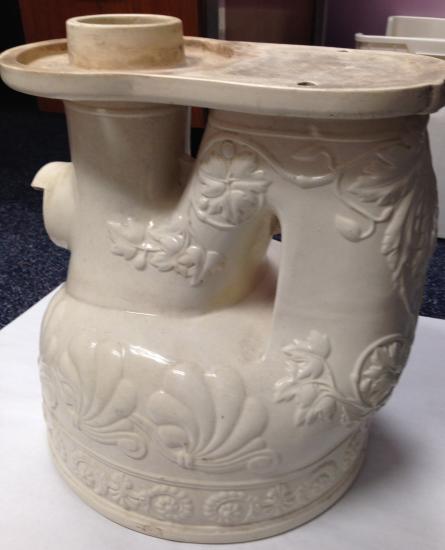 Caitlin: That's right, a toilet. That requires some explanation, doesn't it?

The Object Project exhibition team needed a toilet to tell the story of indoor plumbing. Though we may not give toilets a second thought today, at one point they represented a major improvement in how people lived their daily lives—as in, no longer going outside to use the restroom! At first, indoor bathrooms only existed in the homes of the very wealthy, but they became more common by the 1900s. Americans started including rooms just for "hygiene" in their houses in the mid-1800s but, besides being expensive, the toilets and showers did not work well. The fixtures were often fancy,  like our 1905 porcelain version in the decorative Victorian style of the era. 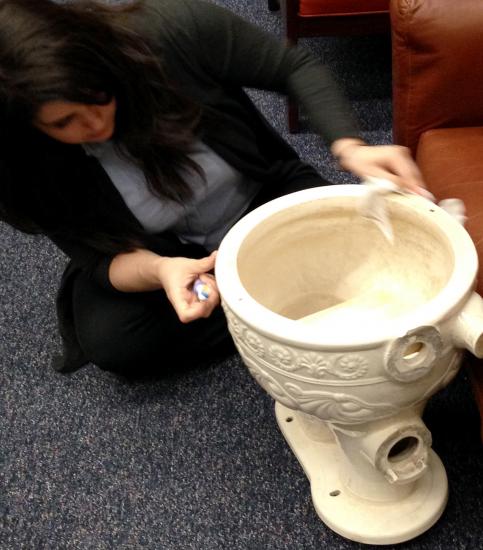 Indoor plumbing also changed how (and how frequently) people bathed, since they no longer had to haul water in from a well and heat it. These advances came at the same time as improved sanitation and public health, especially in urban areas. Object Project will take a closer look at the toilet and other household conveniences, as well as the social changes and technological innovations behind these objects and the people who used them.

Heather Paisley-Jones is an education specialist in the Department of Interpretation and a member of the Object Project exhibition team. Caitlin Kearney is an intern with the team and the New Media Department.