Opening on June 28, 2017: An exploration of the largest ideas and ideals in American history

As the museum's social media manager, I get to see many snapshots our visitors share on social media while they're here. Frequently appearing in photos is the statue of George Washington by Horatio Greenough. Visitors often share their photos of the toga-wearing statue with a sense of awe—and occasionally they poke a bit of a fun at George. "Great abs on this guy!" 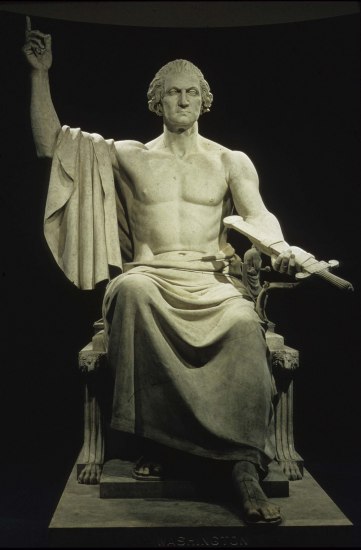 When we open our new floor, centered on the theme "The Nation We Build Together," I think visitors will find something new in Washington's statue, positioned at the entrance to the new space. "This nation isn't going to build itself," Washington seems to hint, offering his sword to the viewer. "Better start working together on this!" What a monumental task and a fitting way to orient visitors as they enter the new wing.

I chatted with the museum's Elizabeth MacMillan Director John Gray to find out what excites him most as we prepare to open "The Nation We Build Together" on June 28, 2017.

One of the first things visitors see in the new wing will be a statue of George Washington, on loan from the Smithsonian American Art Museum. What will that Washington statue communicate to our visitors as the "landmark" or "gateway" object for that space?

George Washington's most extraordinary act, one of the most profound acts in our history, was to give power back to the people. That statue is a symbol of that action. The statue portrays Washington extending his arm and offering back his sword—which represents power—to the nation. As visitors enter the second floor and see into "The Nation We Build Together," that giant statue prepares them for the experience of the whole floor.

The museum's new floor unites several different exhibitions under the unified theme of "The Nation We Build Together." Can you talk about what that theme means to you?

We really want our visitors to have the opportunity to explore the largest ideals and ideas in America. And the name, "The Nation We Build Together," says we are a people and a nation that works collectively through our democracy to forge our nation. This is an ongoing and complicated process—but we are always working toward our national motto: E Pluribus Unum (Out of Many, One). It is so important that, as Americans, we view ourselves as part of the body of America, working together, being together, and building this nation together.

We know "The Nation We Build Together" has been in development for many years. But why is that theme an important one to explore in 2017?

"The Nation We Build Together" is an important theme that resonates across our history, one that's fundamental to understanding America, ourselves, and the larger political process—not limited to party politics, but how we learn, make, and determine how we are governed together.

That said, there's never a better time than the present to understand America. Every election turns out to be different than some people expected. That was true last year, four years ago, four years before that, all the way back to our founding—it's the nature of democracy as we practice it in America! Our new exhibition American Democracy: A Great Leap of Faith will help our visitors understand and contextualize the inherent changes we see over time in America. It's both reassuring and inspirational.

What are we trying to inspire visitors to think or do differently after visiting "The Nation We Build Together"?

The whole floor is about inspiring engagement—understanding that you are part of the process in a bigger way. Many Voices, One Nation inspires all of us to participate in building American communities—really build them! American Democracy: A Great Leap of Faith reminds all of us that we must play an active role in our democracy to keep our nation vital and responsive. And Religion in Early America helps us understand the historical underpinnings of how we practice and celebrate the diversity of religious experience in America. 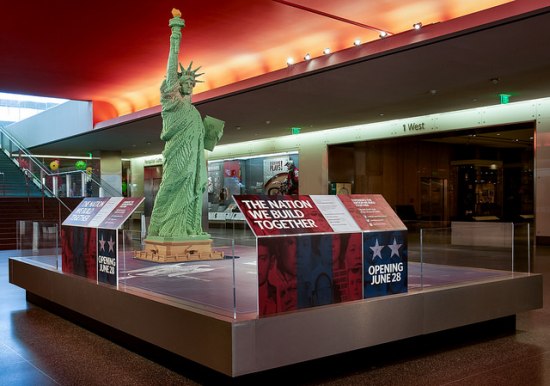 A large Statue of Liberty made of LEGO bricks has appeared in our Constitution Avenue lobby. Can you talk about why Lady Liberty is an important image in the museum right now and what that means to you?

Look at the icons that we've taken from American history and championed. We have the Star-Spangled Banner on display here at the center of the building—and we also have President Lincoln's hat. Each one helps us recognize something we know about or identify within American history—and Lady Liberty is one of those powerful symbols. The image of the Statue of Liberty is inspiring to so many of us. She embodies all of the complicated ideas that form our American history and drive our nation's future.

We try to always have a major object in the museum's Constitution Ave. lobby to send a message about what is happening in the rest of the building and that's what the Statue of Liberty does for us. For many visitors, she's a great photo opportunity and we've seen lots of selfies snapped there. But it's also a spot where people stop to discuss: What does that symbol mean to you? That is an essential discussion we want to see happening in our museum. 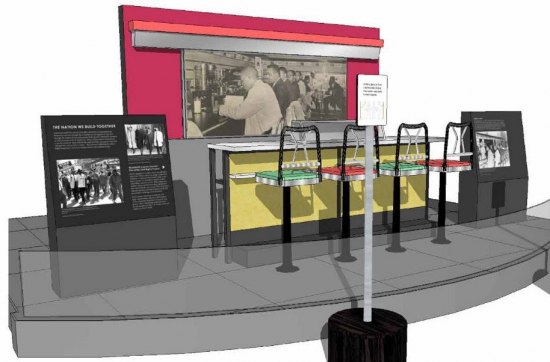 Before we get into specific exhibitions, is there a favorite spot in "The Nation We Build Together" that you want to call out in particular for our visitors?

Well I love that we're going to display Thomas Jefferson's desk and a church bell made by Paul Revere. But I'm also very excited about how we've re-positioned the Greensboro lunch counter in Unity Square. We've given it its own powerful and poignant installation where it will be the center for programs that get visitors talking about America's freedoms both in real life and symbolically. It's called American Experiments and it's going to be a great way to explore, through civic discourse, how we constantly pursue and ensure our freedoms. 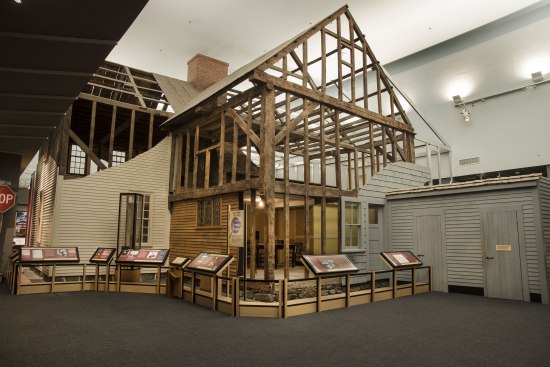 Democracy: A Great Leap of Faith is one of the exhibitions opening in the Linda and Pete Claussen Hall of American Democracy. What do you hope our visitors take away from that exhibition? Do we want to inspire them to be more civically engaged?

Democracy: A Great Leap of Faith is incredibly engaging, moving, and a real enticement to act. It's about political history, which is one of our most important collections, but the ultimate emotional impact is that visitors will want to be more engaged in the civic life of our country—both because it's necessary to protect our freedoms but also, in America, it's essential and invigorating to participate in our democracy. You'll see public engagement over time in this exhibition.

Don't forget to look up in that exhibition, too! You'll spot a media installation showing the cacophony of political advertisements that surround Americans, featuring ads from the 1950s to the present day. The installation, which the staff has nicknamed "the cloud," features 81 separate video screens showing American political commercials—powerful, funny, sad, positive, negative—and representing the ways in which we learn who we want to vote for and who we don't want to vote for. It's both fascinating and fun to see the complicated ways in which we make our case to the people.

In recent years, national politics have become a (seemingly) non-stop source of news in the United States. How will the museum's new exhibitions cut through the noise? What will they add to our national conversation?

Politics is often perceived as noise. That's one of the things it's about. But when you get beyond the proverbial "noise" you can explore the ways we express our ideas and beliefs over time. So it's very important to see this constant activity—that's part of what democracy is about. Our exhibition shows how those ideas continue—freedom, who can vote, how people participate—and we believe that every American wants to participate and has the obligation to participate in a democracy that preserves their life, freedom, and opportunities. 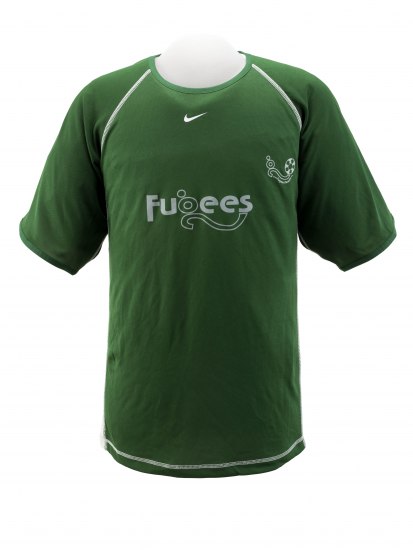 Many Voices, One Nation explores the emblem on our country's Great Seal: E Pluribus Unum, Out of Many, One. Do you have a favorite object or story in that exhibition?

The "Fugees" soccer team story is one of my favorite vignettes in that exhibition! It's about how people came to America with their own traditions and, when they got here, they broadened those traditions, adopting and adapting them. That case is about soccer, sports, school—all these places where people intersect on the playing field and in communities. That's one of my favorite contemporary stories.

As far as a story from further back in time that I love, don't miss the Peter Glass marquetry table. First of all, it's visually striking. Second, it tells a story of isolation, integration, American symbolism, all wrapped up in the story of German immigrants to America.

In Many Voices, One Nation, we investigate the interactions and intersections of different people and the ways in which we have negotiated and worked through differences and challenges to achieve something more than the sum of its parts. Why is it important to study these negotiations and more challenging moments in our shared history?

One of the most exciting ideas in Many Voices, One Nation is that Americans have negotiated with each other for better lives, for a place in the country, for their lifestyles, in ways that have benefited them and, importantly, have benefited America. People from all around the world have come to America, including people who were already here and people who were brought here, and come together over time—sometimes in conflict, sometimes in concord—to create the America we know and we love. Understanding that process is both reassuring and instructive for our future.

The museum's second floor will focus on some of the most discussed issues in America today—politics, religion, migration, and immigration, for example. What is the role of history museums within these big debates?

One thing that's really wonderful about understanding American history is that the hot issues of today were the hot issues of yesterday and the day before. That is a very important notion regarding the dynamic nature of American history. Your National Museum should always be involved in topics that are relevant to people today as well as to those who came before us. Our goal and our deep hope is that we will provide more context to understand the issues to bring us together. 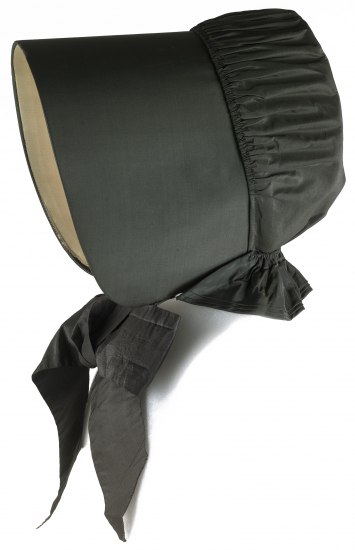 It's going to be a fun day! Opening day for "The Nation We Build Together" will feature live music, wandering Statue of Liberty characters, a fun LEGO make-and-take activity, and a performance at our Greensboro lunch counter in Unity Square. I'm excited to hear jazz, a conjunto ensemble, and blues in our museum that day as we celebrate the opening. Let's cut some ribbons!

Erin Blasco is the museum's blog and social media manager in the Department of Programs and Audience Development.

Posted in From the Collections, Director's Notes 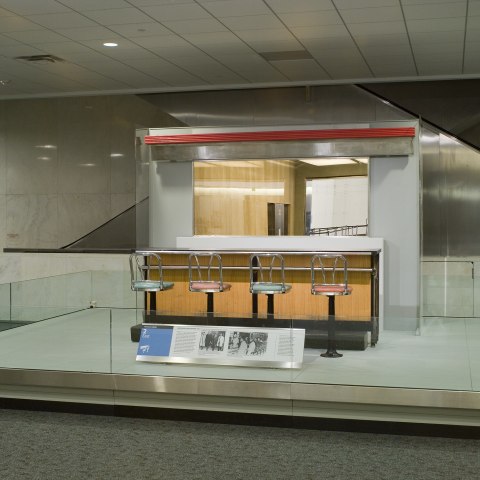 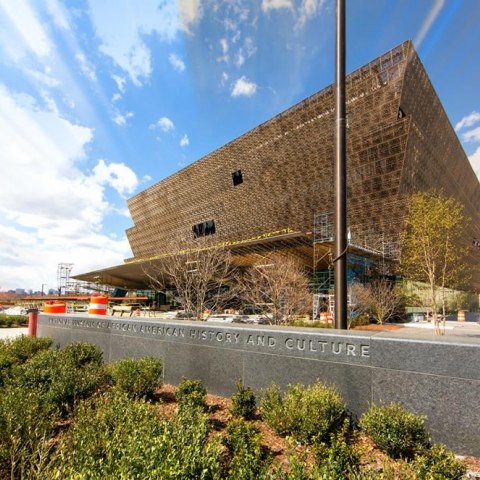 Q&A with Director John Gray: Welcoming a new museum to the National Mall
Our next door neighbor, the National Museum of African American History and Culture, opens on September 24, 2016, and our whole staff is...