What does LaGuardia Airport have in common with piano manufacturer William Steinway's long lost amusement park?

From 1886 through the first two decades of the 20th century, New Yorkers escaping the summer heat flocked by boats and trolleys to North Beach, Queens. Their destination: one of the great beaches and amusement parks of that era.

Its formal name, when it opened on the North Shore of Long Island on June 19, 1886, was Bowery Bay Beach. But many New Yorkers knew it as "The Coney Island of Queens." The pristine recreation area was opened by William Steinway and a partner. Steinway was best known as a manufacturer of the world-famous Steinway pianos, but that wasn't his only area of interest. 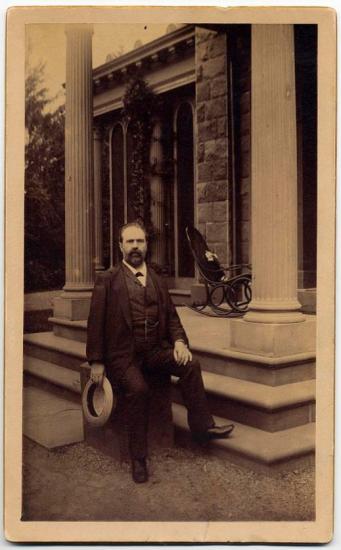 Coney Island, which already existed as a popular beach in 1886 and became a major amusement park in 1903, is still going strong today. However, Steinway's resort, later renamed North Beach, was gone by the early 1920s and today sits beneath LaGuardia Airport. Twenty-seven million people a year use LaGuardia, without knowing Steinway's great experiment lies beneath the runways.

William Steinway always thought big, and Bowery Bay Beach was part of a grand business scheme in Queens. It included Steinway's piano factory, a new village for Steinway employees and other working-class New Yorkers, an electric trolley system, hotels, a grand pier to receive steamboats, and a dock and pier on the East River in Manhattan to get visitors to the park.

Steinway also purchased a mansion nearby for his summer home. He built the Steinway & Sons factory that still makes pianos there. The mansion—in private hands today—still stands and vestiges of the Steinway village can be seen.

We know a lot about William Steinway (born 1835), because his diary (1861–1896) is in the museum's Archives Center. Thanks to many years of transcription and research, you can now read the diary online.

"Immense crowds of respectable People at Bowery Bay Beach, and my R.R. is unable to carry half the people," Steinway's June 20, 1886, diary entry read after the grand opening. "At 5 p.m. all the beer is gone, and people overflow Steinway village and drink all the beer there."

The controlling Bowery Bay Beach & Improvement Company wanted "a place where the tired and overworked businessmen and artisans of the big cities might find rest and healthful recreation at moderate expense," Vincent F. Seyfried wrote in North Beach: Vanished Pleasureland of Queens.

The resort wasn't only for businessmen. As William Benjamin and Barbara Williams wrote in The Carousel News & Trader in May 2013: "With the area being very well policed, women and children were able to spend a day or weekend at the park unattended." Crowds during the Steinway era were overwhelmingly German and Irish, but Seyfried's North Beach book noted that on August 18, 1891, a contingent of African Americans from New York City spent the day playing baseball and participating in boat races.

Steinway cared about the resort's image. When the name was changed from Bowery Bay Beach to North Beach in February 1891, Steinway's diary called the switch "a happy idea . . . as people would persist in connecting Bowery Bay Beach to the 'Bowery' in New York." The Bowery neighborhood in Manhattan was known for its vagrants and prostitutes. 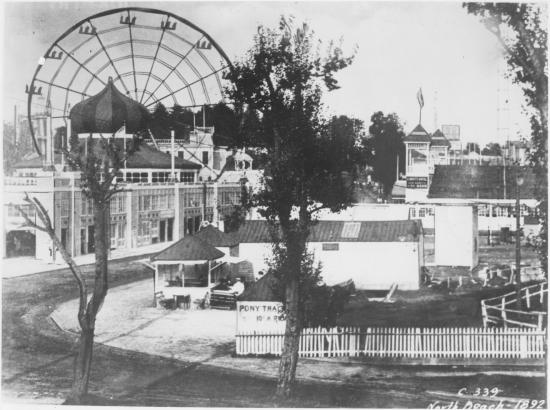 Steinway was a great promoter of his businesses. Seyfried's book noted that after his untimely death in 1896 from typhoid fever, the Long Island City Star reduced its frequent coverage of North Beach to one or two articles a year. After Steinway's death, the resort was vastly expanded into an amusement district with three separately managed parks, and the focus shifted to rides and attractions. 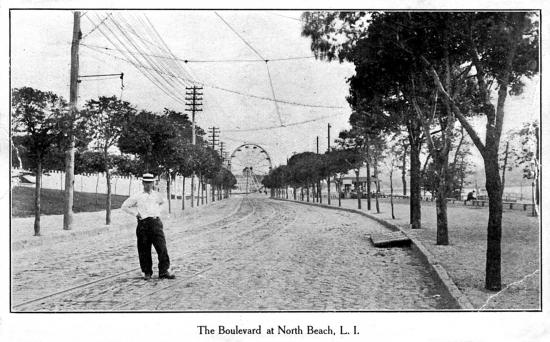 A toboggan slide hurled boats into a four-foot-deep lake at an advertised 72 miles per hour. The boats then shot into the air and across the lake. There was dancing (but not on Sundays), baseball (but not on weekdays), and concerts. 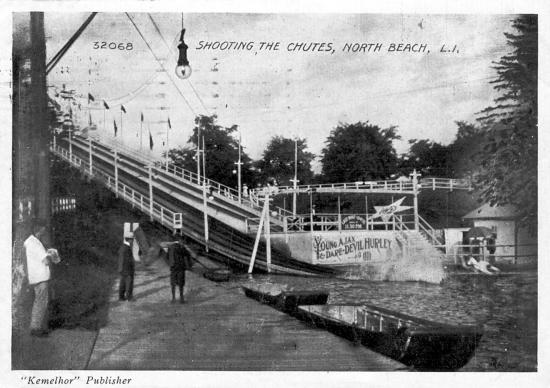 "It was a place of open, serene beauty, a welcomed respite from crowded, often suffocating city life," Benjamin and Williams wrote in the Carousel News & Trader in May 2013.

On July 12, 1896, The New York Times wrote, "Along the mile and a quarter of grand boulevards in the grounds the lamps are placed at intervals of 200 feet," while the reflection on the waves and the light shining through trees created "a sight never to be forgotten." 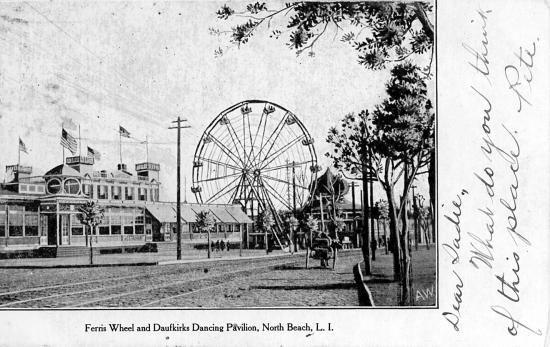 In 1897 gambling—banned while Steinway was alive—became a major attraction. Working-class visitors filled the steamboats and trolley cars in hopes of striking it rich. Local officials worked to drive the operations out, but gambling became widespread after Queens and the other boroughs were incorporated into New York City in 1898—bringing the area a new political establishment.

While the family resort was mostly safe, there certainly was occasional trouble and some embarrassing incidents.

"Some young men attempt to force their way from Rikers (Island) over our Beach but I drive them off with my revolver," Steinway's July 5, 1886, diary entry noted only weeks after the opening.

The August 12, 1886, entry said the railroad manager "Campbell has run away with $3,200." The New York Times reported in August 1887 that William Powers of Long Island sued the resort alleging "that last Saturday Powers, with two respectable young ladies of Astoria," was "unmercifully clubbed" by two of Steinway's private police officers.

Seyfried's book quoted an article in the Newtown Register about a 1891 accident on the switchback railway.

"A short time ago, a young lady was thrown from one of the cars . . . as it was going around a curve at terrific speed, receiving injuries that resulted in her death. And it is reported that a young lady had an ear taken off by an iron rod as she was reaching out to catch her hat that had blown off."

The decline of the amusement district began in 1917. German Americans, originally welcomed by one of their own, William Steinway, stopped coming to many public places after the United States' entry into World War I. And the number of visitors also fell after the passage of Prohibition in 1919.

The death blow came from pollution, and New York City was responsible. Garbage from city-owned Rikers Island, directly across from the amusement area and later the site of New York City's main prison, had been washing up on the beaches since the mid-1890s. The area eventually became unsafe for swimming. And in 1917, a trunk sewer was emptying untreated waste into nearby Flushing Bay. The odor was terrible, while shops selling seafood and hotels promoting fresh catches had to close. Trolley lines were abandoned. In 1929, according to LaGuardia Airport's website, "The park was transformed into a 105-acre private flying field and first named Glenn H. Curtiss Airport after aviation pioneer Glenn H. Curtiss, and then re-named North Beach Airport."

New York City's 99th mayor, Fiorello LaGuardia, had bigger plans. He wanted a municipal airport reasonably close to the city. Construction began in September 1937, on the new municipal facility that sits atop the old Bowery Bay Beach and bears the mayor's name.

Larry Margasak is a retired Washington journalist. He is a volunteer with the museum's ambassadors, who roam the building to assist visitors, and also is a researcher and writer with the Steinway Diary Project. He has also blogged about Steinway's trip to a baseball game. If you would like to join the research team of the William Steinway Diary Project, email steinwaydiaryinfo@si.edu.