What connects Abraham Lincoln and vampires? Bram Stoker, of course.

What is it about Abraham Lincoln and vampires? When Seth Grahame-Smith published his action/horror mash-up novel Abraham Lincoln: Vampire Hunter, scholars cringed. Few historians studying the 16th president were willing to go on the record to say what many truly thought, but suffice to say, it was not as supportive as the praise given for turning the life of Alexander Hamilton into a Broadway play. Nevertheless, a Lincoln/vampire connection does exist, and part of that story is now in the Smithsonian Institution.

In 1886 three men—New York businessman and art collector Thomas B. Clarke, Century Magazine editor Richard W. Gilder, and famed American artist Augustus Saint-Gaudens—contacted the secretary of the Smithsonian Institution, Spencer Baird, with a proposal. The three represented a consortium of subscribers who had recently purchased from Douglas Volk casts of the life mask and hands of Abraham Lincoln—items made by Volk’s father, Leonard, in 1860. If the Smithsonian promised to preserve the plaster mask and hands, and to guarantee that no future copies were ever made from the originals, the group would donate its Lincoln relics and a set of the bronze copies made by Saint-Gaudens.

On January 1888 the institution received the donation. It consisted of the original plaster life mask and hands, a bronze set produced by Saint-Gaudens, a signed affidavit from Leonard Volk, and an illuminated list of the 33 subscribers who, as a group, made the donation. The list includes well-known friends and admirers of Lincoln such as John Hay, the former president’s private secretary. But one name curiously stands out: Bram Stoker, the Irish-born author of Dracula.

Why did Bram Stoker join the group, and how did he ever learn about the project? When the museum was given the opportunity to collect Stoker’s copy of the life mask, we decided to find answers to these questions.

It turned out that American poet Walt Whitman held the answers. Stoker—like a number of young Irish students at Trinity College in Dublin—was drawn to this rebellious voice from across the ocean that explored the notion of manly love and comradeship. In 1872 Stoker began a correspondence with the poet. In what can only be considered fan letters, Stoker poured out his soul and declared himself a Walt-Whitmanite.

For much of his professional life, Stoker was the business manager for celebrated actor Henry Irving and his Lyceum Theatre in London. As the theater’s manager, Stoker made several trips to the United States in the 1880s. These trips allowed him to meet his literary idol—who, in his estimation, did not disappoint. Stoker would later write, “I found [Whitman] all that I had ever dreamed of, or wished for in him.” During these visits, Whitman shared with Stoker his memories of his own personal hero, Abraham Lincoln. Stoker recalled how “our conversation presently drifted towards Abraham Lincoln for whom he had an almost idolatrous affection. I confess that in this I shared; and it was another bond of union between us.”

In 1886 Stoker visited Saint-Gaudens’s New York studio, hoping to persuade the artist to make a bust of Whitman. Saint-Gaudens expressed interest in creating a sculpture of the poet, but it never materialized due to Whitman’s declining health. By chance, sitting in the studio were the original casts of Lincoln’s life mask and hands. Seeing the relics, Stoker not only joined the list of subscribers, he convinced Henry Irving to participate as well.

Back in London, with the bronze mask of Lincoln resting on the podium, Stoker delivered a series of lectures on America in which he presented the stories that Whitman had shared with him. At his death in 1913, Stoker’s widow auctioned off many of his possessions. Prominently listed in the sales announcement were the author’s notes on Dracula, his Whitman collection, and the cast hands and mask of Lincoln.

The life mask found its way into the personal collection of prominent American financier and philanthropist John D. Rockefeller Jr. (the whereabouts of the hands are unknown). He would pass the mask on to his son Nelson Rockefeller, who shared Lincoln’s presidential ambitions and would become governor of New York and vice president under Gerald Ford. Nelson gave the life mask to his daughter Mary Rockefeller, who presented it to her Springfield, Illinois-born husband, Thomas Bruce Morgan, whose career included being a writer; magazine editor for LOOK, Esquire, and The Village Voice; and press aide to presidential candidate Adlai Stevenson and New York City Mayor John Lindsay. Following Morgan’s death, his children, Kate and Nick Morgan, hoped to find a more public home for Bram Stoker’s life mask and offered it to the National Museum of American History. This not only resulted in a wonderful new acquisition to the collection, but also led the museum to answer the riddle of Stoker’s involvement with the original donation in 1888.

While the mystery of how and why Bram Stoker joined the group of subscribers has been solved, additional connections between Lincoln and vampires will have to wait for another day.

Harry R. Rubenstein is a curator in the Division of Political History. 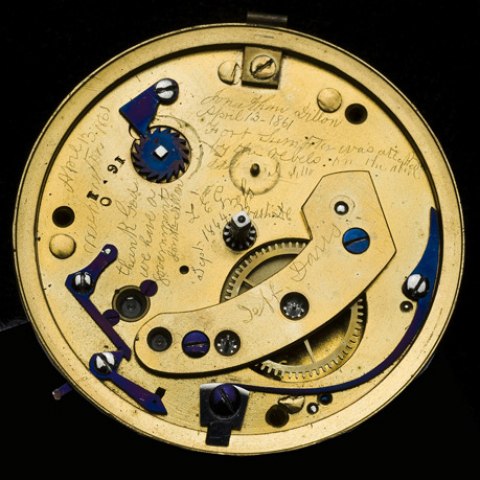 A secret message inside Lincoln's watch?
A hush fell over the room as the watchmaker halted his work. A partially-dismantled pocket watch that once belonged to President Abraham...