Bringing Health Care to the Community 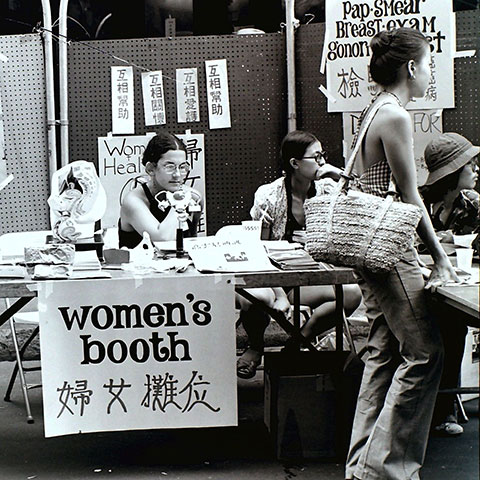 “Bring the exam room to the community.” That was the motivation behind a 1971 effort led by Dr. Thomas Tam to organize a health fair in New York City’s Lower Manhattan Chinatown. A ten-day event held on the street, the first Chinatown health fair included health education booths, with materials translated into Cantonese, and screenings for a range of medical concerns: blood pressure, tuberculosis, breast cancer, sexually transmitted infections, and diabetes. The health fair made one thing very clear to its organizers: Chinatown needed a health clinic.

Community health centers like the Charles B. Wang Community Health Center, which grew out of the 1971 health fair, owe their existence to a broader movement in the 1960s and 1970s among American health and civil rights activists to increase access to health care. The way in which that history played out in the city blocks that make up New York City’s Chinatown depended on the organizational efforts of a small group of young, predominantly Chinese, women and men who assessed their community’s needs and attempted to address them. Yet, in many ways, it was the patients themselves who shaped the medical philanthropy of the future Chinatown Health Clinic, from the services offered to the skills of the staff.

When Regina Lee, a Chinatown resident and NYU college student who later became the CBWCHC’s Chief Development Officer, decided to volunteer at the health fair, she already knew how difficult it could be to access healthcare in the community—she had experienced it herself: "I remember growing up as a kid there were very few healthcare resources, just a handful of doctors... I remember I needed dental care, affordable dental care. I couldn't get dental care in Chinatown." Lee’s parents took a day off of work to take her to a free clinic in another neighborhood. More than anything, she remembers the anxiety of the experience:

It took a whole day and I remember being really nervous. I was already nervous about seeing a dentist and it was a big clinic. It didn't feel comfortable. You have to wait in line and wait a lot of hours in order for a dentist to examine you.

Nobody explained anything. I just remember being really scared as a kid...My parents didn't want to bring us back there because we were nervous, and it took them a whole day. They couldn't go to work. I never had any dental care except for that one experience.

Years later, Lee again felt the frustration and the confusion of seeking medical care, but this time as a volunteer helping other Chinese Americans navigate the medical system. Lee traveled with Chinatown health hair patients to other areas of the city. They endured long waits and were frustrated by the providers’ poor communication. “I remember, even though I spoke English, I didn't understand the process. They would send you from one room to another room. No one explained what was going on. If you tried to ask questions, people frequently dismissed you.”

These follow-up efforts made clear the need for a Chinatown Health Clinic that increased access to health care; provided language translation; and specialized in services for conditions that were prevalent in the community. The activists who volunteered at the health fair discovered that many women had never had a mammogram or pap smear; tuberculosis had gone undiagnosed; and access to healthcare was difficult to navigate in terms of location, language, and culture. There was a great need for follow-up care. “That’s why we started the free clinic, because we had so much to follow up” after the health fair, explains Marie Lam, a 1971 health fair volunteer and later, CBWCHC board member. The medical challenges in the community needed a local, affordable solution.

But the challenges for establishing a clinic did not only involve medical logistics—some community members were against both the health fair and the efforts to establish a clinic that followed. “The idea that health care was a right, and that we were offering free healthcare was considered a very radical idea,” Lee explains. “See,” Lam notes, “anybody that wanted change were communists. So we were [considered] communists.” It was a divisive point in the Chinatown community. Lam recalls one business owner asking another, who supported their efforts, “How come you helping these lefters?” The supporter replied, “Because they are doing a good job and serving the community.”

Many members of the community agreed that the health clinic was making a difference in Chinatown and supported its expansion. During one fundraising drive, garment factories and restaurants tuned their radios in during a radiothon on Sinocast, a Cantonese-language station, so that their employees could participate. The fundraiser itself took on a community feel, Lee recalls: “We would announce, you know, ‘Sewing machine number 13, Mrs. Lee, just made a pledge.’ Then someone else would say, ‘Oh yes, I'm also going to make a pledge,’ and we would announce the name.” Donations were often small—“$5 from one seamstress, $5 from another one”—but by the end of the day, the numbers added up.

Regina Lee believes that, “if you're a community-based organization, those small donations also matter. To me, it means that what we're doing is the right thing. That people care about it. And people need it. And they appreciate it.” One of Lee’s most powerful validations for the clinic’s work came from a woman who walked in from the street and wanted to make a donation:

She proceeded to give me some cashier checks. She counted out six of them, and then I looked at them. Each cashier check was 500 dollars. She gave me three thousand dollars. I looked up—I thought, that's a really generous donation from somebody just walking in from the street—I looked up and I saw that she was wearing a license. She was a street vendor. She had a street vendor license. The license had a photograph of her, and her ID number, identifying her as a street vendor.

I was flabbergasted. I said, “Wow, how come you decided to make this generous donation to us? How did you find out?” She said, “My father has just passed away. He left some money for us. My brother and I talked about it, and we decided to donate the money. Both of us have jobs. We have a place to live. We have enough food. So we just decided to donate. And someone told me to come and donate it to you.

“That $3,000 donation to me is as valuable as a million-dollar gift,” Lee says, “because it validates our mission and validates our work.”

The specific needs of the community have shaped the services that the CBWCHC offers and it has led them, along with other community health centers in the United States, to take a more comprehensive approach to healthcare, providing not only medical care, but also support services and prevention programming. As an example, Lee notes, Chinese men currently have the highest smoking rate in New York City and cancer is the leading cause of death for Chinese people in New York, “So, smoking is a big issue...We have a project to work with community organizations, with ethnic media, to raise awareness; to prevent people from smoking; to work with teens to prevent the initiation of smoking. We do a lot of these community population health projects because we recognize that environmental conditions in the community also impact health.”

Providers at the clinic are also attuned to the cultural practices of their patients in an effort to provide high-quality care:

We know that, and we understand that, after practicing in the community for so many years...Our healthcare providers are aware of that. They talk to their patients about it. If their patient is on medication, we educate the patient. While you're taking this medication, it's probably not advisable to take herbal medicine because they might be contraindicated. We don't tell patients to stop because we respect the culture of Asia. A lot of our providers probably also [use] herbal medicine [themselves].

Culturally knowledgeable health care is not simply about providing quality care for diagnoses and treatments. It requires knowing things about a community—knowing about traditional medical practices, understanding cultural beliefs, and being attentive to language and dialects. It is difficult to get culturally knowledgeable health care right, especially in a community that is rapidly expanding. “How do you do it when there are more than 200 languages in New York City, and they’re growing in diversity?” asks Lee. Ultimately, she says, “we can’t train our staff to be truly culturally competent. But what we can train them around is the mission of the organization: deliver high-quality care; focus on quality; treat people with compassion and respect. Even if you can’t communicate with [people], if you treat them with respect, chances are, that may be good enough.”

Knowing how to make people feel respected involves knowing the community you serve. Taking into account those patients’ anxieties, needs, and expectations allowed the 1971 Chinatown health fair volunteers to not only found a clinic that now serves 60,000 people, but also enabled patients to shape the contours of the clinic’s medical philanthropy.

This essay is based on oral histories conducted with Regina Lee and Marie Lam as part of the Philanthropy Initative's Oral History Project.

Dr. Sarah Weicksel is a Project Historian for the Philanthropy Initiative in the Division of Work and Industry.