2019 Power of Giving > >
What helped eradicate smallpox? Join epidemiologist William Foege, MD, MPH, as he speaks about public-private partnerships and philanthropy’s role in accomplishing major milestones in public health over the past century.
In his keynote to the Smithsonian’s 2019 Power of Giving symposium, Dr. Foege discusses how these partnerships led to the development of vaccines for yellow fever and polio; the eradication of hookworm and smallpox; and contemporary campaigns to fight the spread of AIDS and the Zika virus, among other achievements. 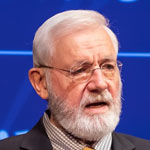 WILLIAM FOEGE, MD, MPH, is a world-renowned epidemiologist who worked in the successful 1970s campaign to eradicate smallpox. Foege became chief of the Centers for Disease Control and Prevention (CDC) Smallpox Eradication Program, and was appointed CDC director in 1977. In 1984 Foege and colleagues formed the Task Force for Child Survival and Development, a working group for the World Health Organization, UNICEF, The World Bank, the United Nations Development Program, and the Rockefeller Foundation. Its success in accelerating childhood immunization led to an expansion of its mandate in 1991 to include other issues that diminish the quality of life for children. Foege served The Carter Center between 1986 and 1999, first as its executive director, fellow for health policy, and executive director of Global 2000. Between 1992 and 1999 he contributed to the center’s work as a fellow and executive director of the Task Force for Child Survival and Development. In 1997 he joined the faculty of Emory University, where he is now Emeritus Presidential Distinguished Professor of International Health at the Rollins School of Public Health. In 1999 Foege became a senior medical advisor for the Bill & Melinda Gates Foundation, where he remains active as a Gates Fellow.