John Wilkes Booth’s hatred of Lincoln grew as the Confederacy’s cause collapsed. On April 11, 1865, he heard Abraham Lincoln address a crowd outside the White House. Lincoln advocated extending the vote to educated African Americans and all black veterans. Booth turned to his companion Lewis Powell and exclaimed, “That means nigger citizenship. That is the last speech he will ever make.”

A Maryland native, Booth was born into one of the country’s leading families of actors. He was well known at Ford’s Theatre. On the night of April 14, he was welcomed as he passed up the stairs to the president’s box. 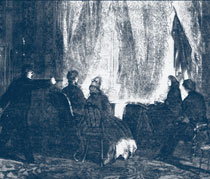 The Assassination of Abraham Lincoln

On April 14, 1865, the Lincolns and their two guests, Clara Harris and Maj. Henry Rathbone, arrived late to Ford’s Theatre for a production of Our American Cousin. As the president entered the theater, the crowd wildly cheered and the orchestra played “Hail to the Chief.” Lincoln set his silk hat on the floor, and the actors resumed where they had left off.

At about 10:15 p.m., John Wilkes Booth entered the presidential box, pointed a derringer pistol at the back of the president’s head and fired. Booth then pulled out a knife, slashed Rathbone, and jumped onto the stage, declaring “Sic semper tyrannis”—“Thus always to tyrants,” the Virginia state motto. Despite breaking his leg as he hit the stage, Booth escaped backstage and onto a waiting horse.

"The shouts, groans, curses, smashing of seats, screams of women, shuffling of feet and cries of terror created a pandemonium that . . . through all the ages will stand out in my memory as the hell of hells."
—Helen Truman, a member of the audience

The play’s leading actress, Laura Keene, rushed with water to the president’s box. As she cradled the president’s head, drops of his blood stained her cuff. She gave the cuff to her nephew, M. J. Adler, who preserved it throughout his life. 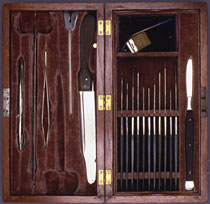 Gift of the Medical Society of the County of Kings, 1983

On April 15, Surgeon General Joseph K. Barnes directed an autopsy on Lincoln’s body in the White House. The name of the surgeon who performed the autopsy was not recorded. The instruments he used were given to Alfred D. Wilson, a young doctor who assisted in the procedure. They remained in Wilson’s family until they were donated to the Medical Society of the County of Kings in Brooklyn, New York, in 1935.

Death of Lincoln, painted and engraved by A. H. Ritchie, about 1875. Courtesy of the Library of Congress.

Lincoln was carried across the street to the home of William Petersen. For nine hours he lay in a small bedroom surrounded by doctors, government officials, and family. He died at 7:22 a.m. the next morning, April 15, 1865. Secretary of War Edwin Stanton raised his hat and declared: “Now he belongs to the ages.” 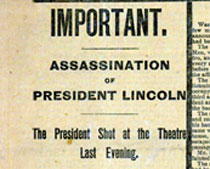 Excerpt from the New York Herald

‹ Assassination and Mourning up - The Conspiracy ›