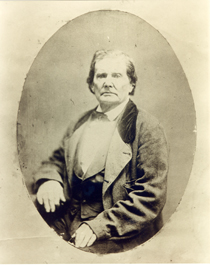 Photograph believed to be of Thomas Lincoln. Courtesy of the Abraham Lincoln Library and Museum of Lincoln Memorial University, Harrogate, Tennessee.

Thomas Lincoln, Abraham’s father, was also a child of the frontier. He had seen his own father killed by Indians. Largely a subsistence farmer, Thomas moved his family from Kentucky to Indiana and eventually to Illinois in search of better prospects.

Thomas’s relationship with his son grew increasingly strained as Abraham matured. By the end of Thomas’s life, they no longer spoke. 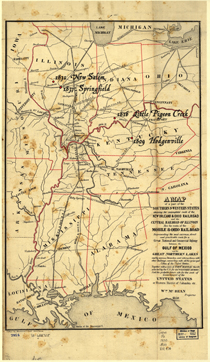 My childhood-home I see again,
And gladden with the view;
And still as mem'ries crowd my brain,
There's sadness in it too.

O memory! thou mid-way world
Twixt earth and paradise,
Where things decayed, and loved ones lost
In dreamy shadows rise ....

I range the fields with pensive tread,
And pace the hollow rooms;
And feel (companions of the dead)
I'm living in the tombs. 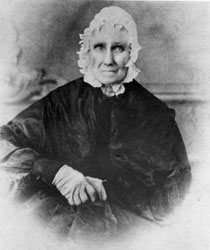 Photograph of Sarah Lincoln. Courtesy of the Abraham Lincoln Presidential Library and Museum.

Sarah brought stability to the family. Although illiterate herself, she encouraged the children’s education and supported Abraham in his love of books and learning, which led him beyond the frontier.
‹ Early Life up - The Railsplitter ›