Throughout his life, Abraham Lincoln wondered if he would leave his mark on history. Today, 200 years after his birth, people around the world still find inspiration in his story.

Like no other American, his life is entwined with the history and culture of the nation. His rise from poverty to the presidency has inspired others to believe in the promise of opportunity; his triumph in preserving a democratic nation is one of our greatest triumphs; and his death is our American tragedy.

This unschooled politician from the western frontier has encouraged generations with his generous spirit and his willingness to give his life so that “government of the people, by the people, for the people, shall not perish from the earth.”

"Some men stand still, amazed, when the tempest darkens around them; others grow and rise to the height of the occasion; but few have ever grown and risen as did this man; his mind maturing and his views expanding under the stirring of his times."
—Robert Dale Owen, reformer and Indiana congressman, 1870 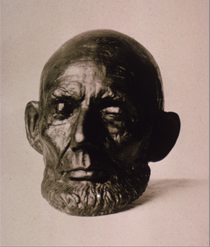 On February 11, 1865, about two months before his death, Lincoln permitted sculptor Clark Mills to make this life mask of his face. This was the second and last life mask made of Lincoln.

The strain of the presidency was written on Abraham Lincoln’s face. His secretary, John Hay, remarked on the dramatic difference in Lincoln’s two life masks. He noted that the first (displayed earlier in the exhibition) “is a man of fifty-one, and young for his years. . . . It is a face full of life, of energy, of vivid aspiration. . . . .The other is so sad and peaceful in its infinite repose . . . . a look as of one on whom sorrow and care had done their worst without victory is on all the features.”
‹ A Funeral Procession 1,700 Miles Long (page 2 of 2) up Resources ›