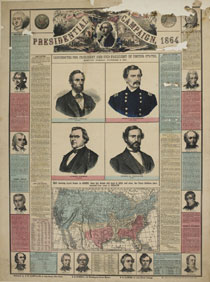 Lincoln had good reason to doubt his chances for reelection. No president since Andrew Jackson in 1832 had won a second term.

The Democratic Party nominated Gen. George McClellan, whom Lincoln had removed from command. McClellan ran on an anti-Lincoln and anti-Emancipation Proclamation platform and left open the possibility of a negotiated peace with the South.

As the election approached, Union triumphs on the battlefield helped propel Lincoln to victory. He declared the election results a mandate to press on for an unconditional victory and a constitutional amendment to end slavery. 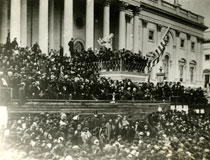 On March 4, 1865, as the war was coming to an end, Abraham Lincoln delivered his second inaugural address on the east portico of the Capitol. It was not a triumphal speech: rather, Lincoln expressed his profound sadness at the cost of the war and his prayers for the future. Frederick Douglass noted in his diary, “The address sounded more like a sermon than a state paper.”
"Fondly do we hope, fervently do we pray, that this mighty scourge of war may speedily pass away. Yet, if God wills that it continue until all the wealth piled by the bondsman's two hundred and fifty years of unrequited toil shall be sunk, and until every drop of blood drawn with the lash shall be paid by another drawn with the sword, as was said three thousand years ago, so still it must be said 'the judgments of the Lord are true and righteous altogether.'

"With malice toward none, with charity for all, with firmness in the right as God gives us to see the right, let us strive on to finish the work we are in, to bind up the nation's wounds, to care for him who shall have borne the battle and for his widow and his orphan, to do all which may achieve and cherish a just and lasting peace among ourselves and with all nations."
—Abraham Lincoln, from the Second Inaugural Address, March 4, 1865