Lincoln’s early interest in technology carried over into his presidency. He took personal interest in the development of new weaponry and embraced the relatively new telegraph system to aid in managing the war. In 1863 he helped establish the National Academy of Sciences as a scientific consulting body to the government. 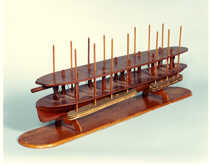 Abraham Lincoln’s patent model for lifting boats over shoals. He obtained the patent in 1849 while serving as a member of Congress. To date, he is the only president to receive a patent.

Almost daily, and sometimes more often, Lincoln visited the War Department telegraph office across from the White House. By reviewing military telegrams, he gained insight into the thinking of his generals and, welcome or not, could insert himself into their decisions. The constant flow of information allowed Lincoln to follow the war as it happened and to assert his leadership over the military as no president before him.

A Gift with a Purpose

The New Haven Arms Company presented this engraved, gold-mounted Henry rifle to Abraham Lincoln in an effort to influence the sale of its weapons to the army. Designed by B. Tyler Henry, the .44-caliber, lever-action repeating rifle fired up to seven times faster than single-shot muskets. But the rifle was deemed too heavy and damage-prone for regular battlefield use. Although the federal government purchased relatively few of the rifles, several Northern state militias acquired them at their own expense.
‹ - Commander-in-Chief up Emancipation Proclamation ›