Lincoln’s frustration and depression deepened as Union military defeats continued into 1863. The Union army had every advantage in resources, but failed to assemble the military leadership needed to mount a successful campaign.

Lincoln replaced generals and changed the command structure of the army several times before he finally selected Ulysses S. Grant to take command. He had gained Lincoln’s confidence after winning crucial victories at Vicksburg, Mississippi, and elsewhere in the West. In Grant, Lincoln had finally found a general who would muster the full strength of the Union army against the Confederacy. 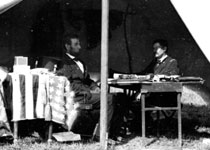 Photograph by Alexander Gardner, October 3, 1862. Courtesy of the Library of Congress.

Lincoln gave Gen. George McClellan the task of building and training the Union army in 1861. He was a superb organizer and popular with his troops, but an ineffective battlefield commander. 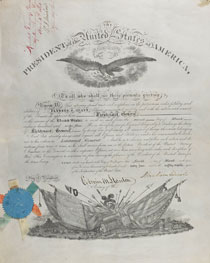 On March 4, 1864, Lincoln signed this certificate making Ulysses S. Grant a lieutenant general, a rank previously held only by George Washington. Once in command of the Union armies, Grant undertook a relentless and bloody campaign against Gen. Robert E. Lee’s Army of Northern Virginia.

Engraving of Gen. U. S. Grant receiving his appointment from President Lincoln.
"From these honored dead we take increased devotion to that cause for which they gave the last full measure of devotion—that we here highly resolve that these dead shall not have died in vain—that this nation, under God, shall have a new birth of freedom—and that government of the people, by the people, for the people, shall not perish from the earth."
—Abraham Lincoln, at the dedication of the cemetery at Gettysburg, November 19, 1863
‹ - "Come and Join Us Brothers" up Election of 1864 ›