Like other young boys on the frontier, Abraham Lincoln helped clear land, build fences, plant, tend crops, and care for livestock. As he grew older, his father regularly hired him out to other farmers—the wages Abraham brought home helped keep the family afloat. At age 21, he left his father’s home to seek a life away from farming.

Lincoln’s backwoods upbringing remained part of his identity as he left the frontier to seek a new life as a gentleman lawyer and political leader. 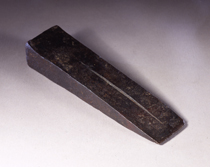 In the early 1830s Lincoln used this iron wedge to split wood in New Salem, Illinois. His initials are chiseled on one side. 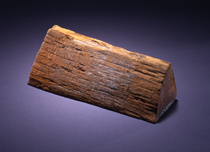 Piece of fence rail with affidavit from John Hanks, Lincoln’s cousin. The affidavit reads: “This is to certify that this is one of the genuine rails split by A Lincoln and myself in 1829 and 30.” John Hanks sold pieces of other fence rails to Lincoln supporters during the presidential campaign of 1860. This piece, cut from a larger rail, was later sold to raise money for Union soldiers. 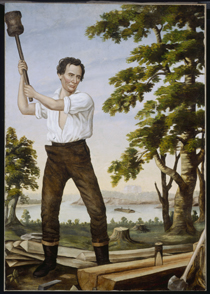 Detail from a life-size oil portrait painted for Lincoln's presidential campaign in 1860. Courtesy of the Chicago History Museum

The idea of creating the image of Lincoln as “the railsplitter” was the inspiration of Illinois politician Richard J. Oglesby. He sought to find “one thing in Mr. Lincoln’s unsuccessful career as a worker that could be made an emblem … [to] make enthusiastic the working people.”

In 1885 workers found this wedge during renovations to a house that once belonged to Mentor Graham in New Salem, Illinois. Graham was a friend of Abraham Lincoln’s, and Lincoln gave him the wedge as a token of friendship when he left New Salem to begin his career as a lawyer in Springfield.

The initials “A L” appear on one side of the wedge. John Spears, a neighbor, recalled the day Lincoln went to a blacksmith shop and asked to have his initials cut into the wedge. The blacksmith hesitated, claiming he was “no scholar.” Lincoln borrowed the tools and marked the wedge himself.

In May 1860 Illinois Republicans met to select their presidential nominee. Lincoln’s supporters staged a demonstration in the meeting hall, which they capped off with John Hanks, Lincoln’s cousin, carrying in two fence rails split by Lincoln and Hanks. Suspended from the rails was a banner that read, “Abraham Lincoln the Rail Candidate for President in 1860.”

The delegates wildly cheered the theatrics, and Lincoln handily won the nomination. One observer noted, “That banner was to be the ‘Battle flag’ in the coming contest between ‘labor free’ and ‘labor slave,’ between democracy and aristocracy.” In that moment, Lincoln became a symbol of the self-made frontiersman and representative of honest, enterprising labor. 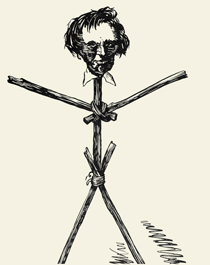 The imagery of the railsplitter helped to define Lincoln as a man of the people, but critics also used it to characterize him as a simple-minded backwoodsman unqualified for high office.
‹ - Childhood up - Lawyer ›