By late 1864 the war was coming to an end. In December Gen. William T. Sherman completed his destructive march to the sea. Richmond, the Confederate capital, fell early in April, and on April 9, Gen. Robert E. Lee surrendered his army to Gen. Ulysses S. Grant. Over the course of the war, some 623,000 Northern and Southern soldiers died. 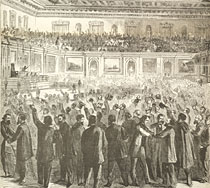 On January 31, 1865, Congress passed the 13th Amendment to the Constitution, abolishing slavery. The measure was ratified by the states on December 6, 1865. 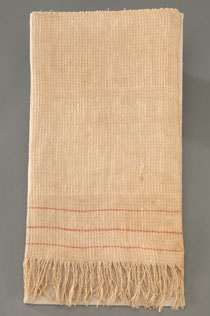 A Flag of Truce

This towel was used as a flag of truce by Confederate troops during Gen. Robert E. Lee’s surrender at Appomattox Court House, Virginia, on April 9, 1865. It was preserved by Gen. George A. Custer, who was present at the surrender.

Engraving by John Chester Buttre, after a drawing by L. Hollis, published in 1866. Courtesy of the Virginia Historical Society, Richmond, Virginia.

On April 4, 1865, Lincoln made a triumphant visit to Richmond, Virginia, the former Confederate capital.

On April 9, 1865, Gen. Robert E. Lee formally surrendered the Army of Northern Virginia to Gen. Ulysses S. Grant at a private home in Appomattox Court House, Virginia. Coming just days after the fall of Richmond, this event effectively ended the Civil War.
‹ Election of 1864 up Assassination and Mourning ›