Since its founding in 1781, Los Angeles has been under Spanish, Mexican, and American flags. By the 1930s it had grown into one of the world’s largest and most diverse metropolitan areas. Like Chicago, Los Angeles drew people from around the country and the globe with the promise of better jobs and freedom to pursue broader opportunities. While many came and prospered, others faced challenges. Many Hollywood stars Anglicized their surnames to succeed there; Mexican immigrants had limited opportunities and ultimately faced mass deportation; and, during World War II, Japanese Americans were forcibly removed from their homes and businesses. 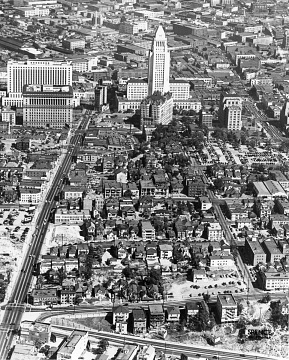 ‹ Near West Side up La Plaza ›