The United States experienced a resurgence in immigration after passing the Immigration and Nationality Act of 1965 (Hart-Celler Act). Improved transportation and communication technologies allowed people to live in this nation while still staying connected to their country of origin. New immigrants had much in common with those who came before: they sought better economic opportunities, greater freedoms, and safer lives. Likewise, they sometimes faced issues of equality and inclusion. These stories about the new American South, the Southwest borderlands, and transnational lives illustrate the ways diverse people have negotiated race, heritage, and culture.

A New Era of Immigration: The Hart-Celler Act of 1965

As immigration policies changed the American ethnic landscape, the news media reflected debates, negotiations, and social and cultural changes throughout the nation. 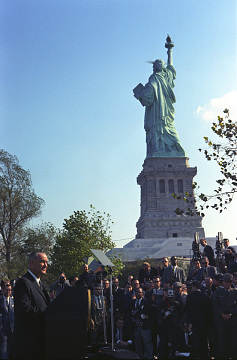