The inhabitants of the new nation were diverse and they would become more so with westward expansion, importation of enslaved Africans, incorporation and conquest of land and peoples, and increasing migration and immigration. With few restrictions on U.S. immigration until the late 1800s, peoples from Europe, the Americas, and Asia arrived seeking land and economic opportunity. The Civil War tested the strength of the Union and resulted in a renewed commitment to the ideal of one nation.

This section tells stories of people who came to the United States and those who were already here, illustrating the challenges they faced in negotiating their place in the expanding nation.

Thirteen British colonies fought to establish an independent nation. After the Revolution, the former colonists worked to create a political system and a sense of national identity expressed through symbols and images on everyday objects. 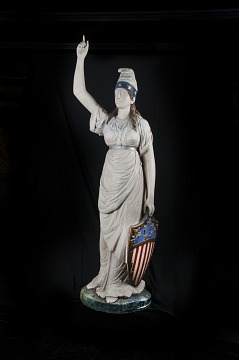 With her liberty cap and patriotic shield, Columbia was one of many idealized feminine figures that personified the new nation. 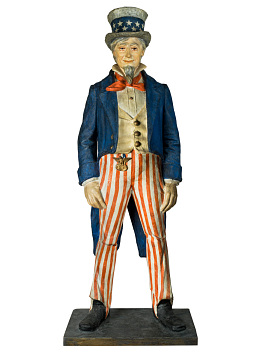 Introduced around the time of the War of 1812, Uncle Sam symbolized the Union during the Civil War. By the 1900s the image of Uncle Sam came to represent the presence of the U.S. government.

In a desire to unify the colonies, the first U.S. Congress chose the motto E Pluribus Unum—Out of Many, One. It took generations for those ineligible for citizenship in the new nation—including Native Americans, people of African descent, and women—to negotiate their place as part of the “One.” 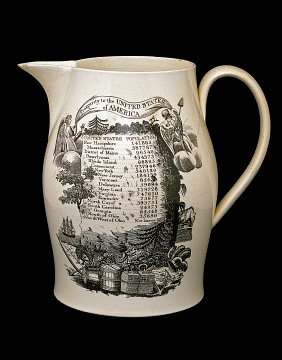 This pitcher illustrates the results of the first U.S. census in 1790 at the time of the Naturalization Act. Of 3.9 million people counted, about half were of English origin, one-fifth were of African descent, and most of the rest were from western and northern Europe. Most Native people were not counted. 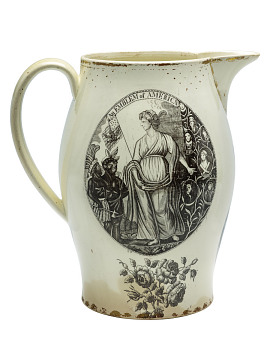 Emblem of America pitcher, around 1800

For centuries Europeans used the figure of an Indian woman to symbolize North America. This British-made pitcher depicts America as a European American female figure with a U.S. flag, and George Washington, along with smaller images of Native Americans.

The Great Seal of the United States 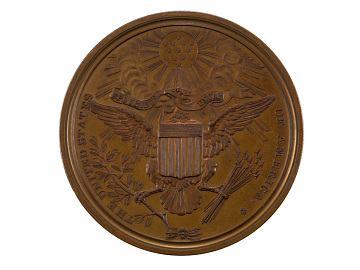 Great Seal of the United States, around 1782 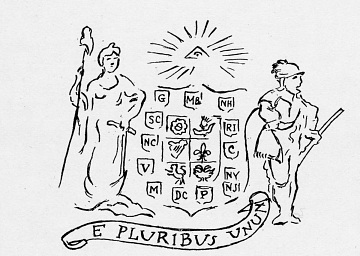 Conceptual drawing of a seal, around 1776

‹ British Pennsylvania up Out of Many ›