The successful launch of Sputnik created widespread public excitement. Moonwatch, a network of observers that had been set up to visually track planned U.S. satellites, was quickly adapted to following Sputnik. Ham radio operators listened to signals that it broadcast. The satellite also inspired commercial goods that ranged from lunchboxes to sound recordings. Further attention came from the press and at the Brussels International Exposition. 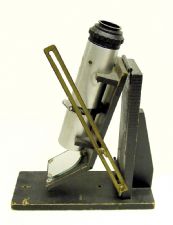 In preparation for the launch of a U.S. satellite, officials at the Smithsonian Astrophysical Observatory and the U.S. Air Force recruited groups of volunteers to spot artificial satellites. Participants in the Moonwatch program had inexpensive telescopes like this one. Each person in a group searched a different region of the sky. If they spotted Sputnik or a later satellite, they reported observations to a central office. Most early Moonwatch observations were not of Sputnik itself, but of its final rocket stage, which also rotated the earth and was brighter.

Sputnik broadcast signals at two frequencies, one of which could be heard by ham radio operators. They listened to the "beep" of Sputnik as it came out of the speaker of receivers like this one. Sputnik took 96 minutes to orbit the earth, its sound audible in any one location for only a few minutes.

The Soviet Union publicized its accomplishments in space at the world's fair held in Belgium in 1958. These two postcards show part of its exhibit. A model of Sputnik II was in the front with one of Sputnik I behind it. A statue of communist leader Vladimir Lenin towered in the back. 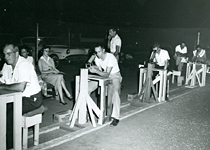 This photograph shows a practice session of the first Moonwatch team that claimed to observe Sputnik. Note the array of Moonwatch telescopes. The team’s initial Sputnik sighting proved inconsistent with other data on the path of the satellite. While the first confirmed Sputnik observations came from Australia, observations from Terre Haute were used in plotting the paths of later satellites. 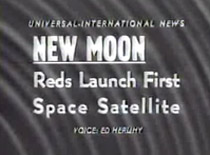 Moviegoers could see an artist's conception of Sputnik and hear its beep in newsreels. Universal Studios released this brief film October 7, 1957.