In the early 1950s, physics textbooks emphasized the functioning of practical objects such as cars, electric lights, and radios. MIT physicist Jerrold Zacharias and several other university physicists thought that students needed to learn more about the basic phenomena of nature, particularly relatively recent ideas about atoms and light. They also emphasized the importance of having students build and manipulate inexpensive equipment, and encouraged the publication of popular historical works on the history of science. 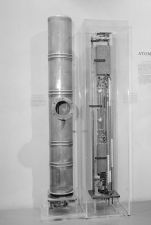 During the first half of the twentieth century, physicists and chemists developed a detailed knowledge of energy levels in atoms and molecules. They found that different substances emitted and absorbed light at precise, characteristic frequencies. As early as 1940, physicist I. I. Rabi of Columbia University predicted that measurements of energy transitions within cesium atoms would be used to produce new frequency standards. Once the oscillations could be counted, one would have a new standard for time measurement. During World War II, Jerrold Zacharias worked with Rabi, learning much about apparatus used to study microwave radiation, including that associated with cesium. He continued this research after the war as a professor of physics at MIT. By 1954, Zacharias and his colleagues had developed this instrument, the first atomic-beam clock. 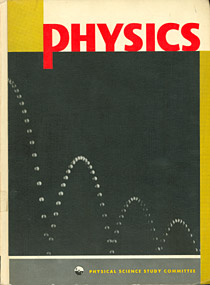 Eight schools agreed to try out experimental PSSC materials in 1957. The number grew to 300 in 1958–1959 and 600 the following year. Text, films, and apparatus were revised on the basis of teacher and student reactions. By 1960, the committee was ready to release this textbook. It focused on relatively few topics and, compared to competing books, said little about practical applications. Physics featured not only the expertise of professional physicists but outstanding photographs.

Ripple Tank for PSSC Physics, about 1960

The PSSC aimed to motivate students to interrogate nature on their own, often with equipment they made themselves. With a ripple tank, the signature PSSC device, students could observe wave phenomena under various circumstances. Uri Haber-Schaim, who donated this example to the Smithsonian, played a key role in the design of PSSC apparatus, was co-author and editor of the PSSC Laboratory Guide and took a leading role in preparing the Teacher's Resource Book. 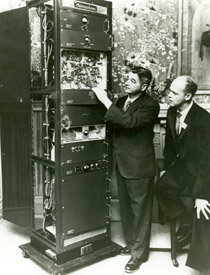 Jerrold Zacharias and his colleagues developed a commercial version of the atomic clock, dubbed the Atomichron. They unveiled an example at the New York Press Club, as shown in this photograph from the New York Times. Concerned about the level of high school physics teaching in the United States, Zacharias also persuaded the National Science Foundation to sponsor the Physical Sciences Study Committee. Headed by an elite group of physicists, the PSSC worked with American teachers to develop a new approach to physics teaching. The group developed a textbook, laboratory apparatus, and a series of films. The emphasis throughout was on wave motion and atoms.

Shortly after the launch of Sputnik, the well-known photographer Berenice Abbott offered her services to the PSSC. She was hired to make photographs like this one. Although she was age sixty, it was her first salaried job. Her science photographs were used not only as textbook illustrations but in several successful photography exhibitions, including one that toured the United States under the auspices of the Smithsonian Institution. 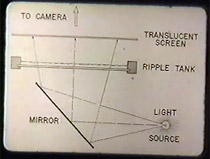 Zacharias and his associates also prepared films for classroom use. These black-and-white productions focused on physical phenomena. When actors were required, they were working physicists. These are short extracts from two films that showed the reflection, refraction, and diffraction of water waves in a ripple tank.