Some Americans were shocked and embarrassed to have lost the first leg of the "Space Race." Some feared that the same technology used to launch Sputnik might be used to deliver thermonuclear weapons. Scientists, politicians, and the popular press attributed the Soviet success to superior education. They called for better science and mathematics education for American children.

Responding to this appeal, authors wrote a wide range of children's books showcasing technical subjects. Moreover, in 1958 the U.S. Congress passed the National Defense Education Act. This legislation authorized the expenditure of over one billion dollars to improve education in mathematics, the sciences, and foreign languages. 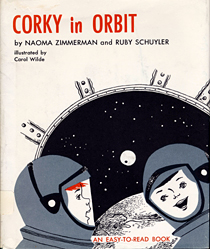 Corky in Orbit by Naomi Zimmerman and Ruth Schuyler, 1962

This illustrated volume for very young readers described two boys and their pets on a voyage into outer space. The children experienced not only launch and landing but the effects of weightlessness.

Mathematics: The Story of Numbers, Symbols and Space, 1958, and The Wonders of Physics, 1966, by Irving Adler

The following year, the publisher Golden Press started "The Golden Library of Knowledge," a series of inexpensive children's books. Some volumes discussed topics in history and nature that had long interested the publisher. Others, including Mathematics: The Story of Numbers, broke new ground for the press. The book included discussion of prime numbers, the Pythagorean theorem, probability, and mathematical proof. Adler also wrote more advanced books, such as the illustrated introduction to physics shown.

Some books were written to give adults a taste of mathematics and the sciences. In the early 1950s, essayist and media personality Fadiman began to collect "a set of stories, together with a group of oddments and diversions, all drawn from the universe of mathematics." He published some of these in the anthology Fantasia Mathematica. The book proved so popular that it was reprinted as a paperback several times and led to a sequel, The Mathematical Magpie. 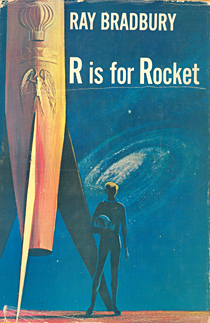 Science fiction author Bradbury had been writing about people and space flight for years. After Sputnik, several of his short stories were collected and published in this book. Established science fiction series for children, such as those about fictional inventor Tom Swift, Jr., grew to include books about the space race. 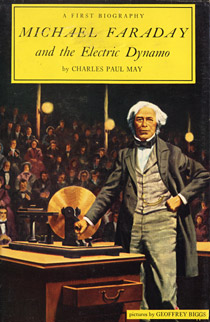 Michael Faraday and the Electric Dynamo by Charles Paul May, 1961

To provide role models for children, authors recounted the early lives and scientific work of famous scientists. This illustrated book is a biography of the eminent English physicist and chemist Michael Faraday. At the same time, the publisher released biographies of Benjamin Franklin, Isaac Newton, Galileo, and Paul and Marie Curie. 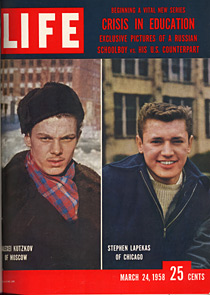 The launch of Sputnik focused new attention on improving American education. In March and April of 1958, Life published a five-part series on the subject. The article in this issue contrasted the rigorous academic schedule of a sixteen-year-old Russian student with the more relaxed life of a boy of the same age in the United States. Later articles discussed the effects of low pay on American science teachers, the limited education provided to brilliant young students, the need for better science education at home, and new curricula, especially a high school physics program being developed at the Massachusetts Institute of Technology.
‹ Excitement (page 3 of 3) up Reform (page 2 of 2) ›