Senator Lister Hill and Representative Carl Elliott, both of Alabama, had long hoped that the federal government would provide greater aid to education. In 1958, working with Elliott Richardson in the Department of Education and colleagues, they forged new legislation that provided assistance for students attending college and matching funds for school systems wishing to purchase apparatus for training in science, mathematics, and foreign languages. Companies selling school supplies advertised teaching equipment available under the program, and many teachers soon had new tools to support instruction. 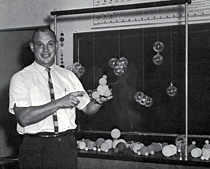 After Sputnik, apparatus used by research chemists moved into the American classroom. Around 1900, chemists had compared molecules to balls (atoms) joined by sticks (chemical bonds). However, they gradually realized that bonds were associated with clouds of electrons surrounding the atomic nucleus. It was more accurate to describe bonding using space-filling models. Different atoms were represented by different shapes, suggesting what chemical compounds could and could not occur. These models initially were very expensive. By the late 1950s, much cheaper space-filling models, based on ideas of the chemist George Kimball and his colleagues, were available. Kimball models could be purchased for high schools with NDEA funds. They also were closely associated with curriculum reform projects. In the photograph, Wisconsin chemistry teacher Wayne Osness shows off his Kimball models. 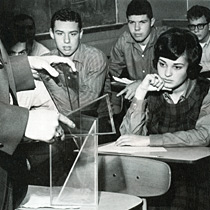 From the 1890s, American geometry teachers had taught about the volume of prisms using wooden geometric models. By the 1960s, schools could purchase transparent plastic versions of the solids under the NDEA.

Those who learned technical subjects were promised both the adventure of discovery and financial rewards. In this episode of the comic strip Barnaby, cartoonist Crockett-Johnson suggested the rich opportunities available to technically trained personnel. "Atlas the Mental Giant," a character whose slide rule suggests his status, was confident that he could easily find a job working on a space project. 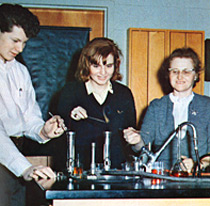 The improved high-temperature burners shown in this photograph were first introduced in 1960. Soon sold by school supply houses, they found their way into chemistry classrooms. Burners were among the supplies that could be purchased under the NDEA.
‹ Reform up Teaching Mathematics and Science in the Home ›