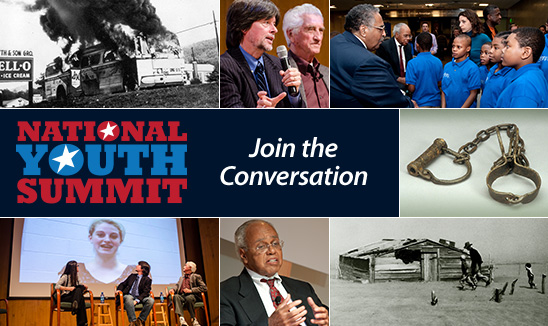 How do the stories we tell about our past shape our democracy? This year's summit looks different! Throughout the 2022–2023 school year, a new case study accompanied by a program will be released every other month. The series will culminate in a teach-in event in April 2023. Each case study uses museum objects and artifacts, addresses a supporting question, and includes teacher- and student-facing materials. Each release will be accompanied by a webinar that introduces the case study, will air live for active participation, and will be recorded for asynchronous use.

What will the future of gender equity look like? The 2021 summit examined issues of gender, bias, and equity. Four case studies were designed to prompt students to think about gender–how it is constructed and how it has impacted communities and individuals in different times and places throughout U.S. history. History was the guide as students unpacked the central questions and envisioned their own answers to what the future of gender equity will look like.

How can young Americans create a more equitable nation? A live panel discussion was held, connecting stories of teenagers in the past fighting to address systemic injustice to those of the present. This 2020 youth summit was centered on the case study of Claudette Colvin—a 15-year-old Black student in Montgomery, Alabama, in 1955. Colvin refused to give up her seat on a segregated bus and testified in the legal case that brought an end to segregated busing in Montgomery.