This website is based on an exhibition that opened at the National Museum of American History in May 2009. Objects pictured here may differ from those currently on view at the museum.

For more than 500 years, waves of new Americans arrived by sea. In that time, the nation’s seacoasts, rivers, lakes, and canals became avenues of exploration, communication, and commerce. Life and work on the water—for seafarers, fishers, passengers, and many others—unfolded through immense challenges and achievements, and occasional disasters.

Today ships and mariners connect Americans to a complex web of international trade. Maritime activity continues to play a significant role in our lives. In the age of flight, it is worth remembering that the nation still thrives on the water. 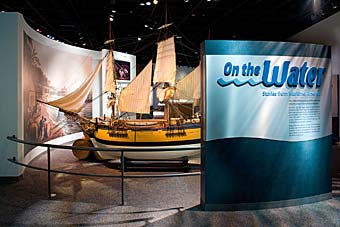 Introduction: The United States grew up on the water and remains a maritime nation to this day.

Fishing for a Living, 1840-1920: The bounty of the waters has sustained people of North America for centuries.

Inland Waterways, 1820–1940: The country’s vast system of rivers and lakes has helped people settle the land and create communities.

Ocean Crossings, 1870–1969: Ocean liners were ships of transport for immigrants and machines of leisure, status, and national prestige.

Answering the Call, 1917–1945: Merchant seamen and ships played a vital role in winning both world wars of the 20th century.

Modern Maritime America: Maritime activity is as important as ever, and it affects the lives of people everywhere.

companion guide to the exhibition geared towards kids grade 5-8. Great for family or school visits!

While visiting the museum, learn more about the history of transportation in America by visiting America on the Move, adjacent to On the Water.