The shipbuilding industry turned out thousands of cargo ships for wartime service.

The United States learned how to mass-produce merchant ships during World War I. Three decades later, convoys of American Liberty and Victory ships delivered tons of fuel, ammunition, and other supplies to fight World War II. At least 1,500 merchant ships were sunk during the war. On the home front, the vast enterprise needed to construct these vessels changed the lives of tens of thousands of American workers and their families.

To learn more about the world wars of the 20th century, visit the online exhibition, The Price of Freedom: Americans at War 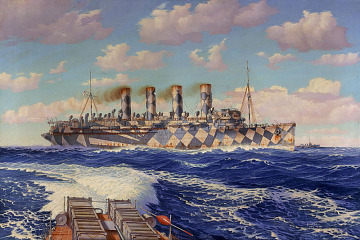 Reproduced from a painting by Burnett Poole, 1919

Ocean liners were pressed into service to carry troops and supplies, especially during the first world war. Even the luxurious British liner Mauretania carried more than 53,000 American troops to Europe in 1918 and 1919. For protection at sea, ocean liners during wartime were painted in “dazzle” patterns to confuse submarines at a distance.

A Merchant Fleet for the Great War

The United States entered World War I in April 1917. Within days, the federal government created the Emergency Fleet Corporation (EFC) to construct a fleet of merchant ships. The EFC hired the American International Shipbuilding Corporation to build and operate the largest shipyard in the world, Hog Island, near Philadelphia.

At its peak, Hog Island employed some 30,000 workers and launched a vessel every 5.5 days. Its workers built 122 ships in four years, and although none saw service before the end of the war, many carried supplies during World War II. At Hog Island, the United States learned how to build large ships quickly on a grand scale from prefabricated parts.

Ships, ships, and more ships is the call of the hour... We must have more ships to win the war.
—Secretary of the Navy Josephus Daniels, February 16, 1918 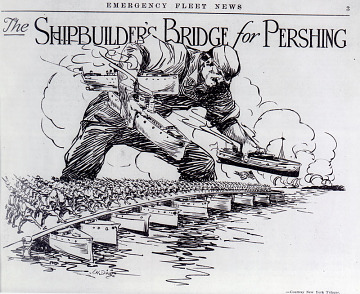 The Shipbuilder’s Bridge for Pershing

Hog Island’s 50 shipways stretched a mile and a quarter along the Delaware River near Philadelphia, abutting 846 acres with 250 buildings and 28 outfitting docks. 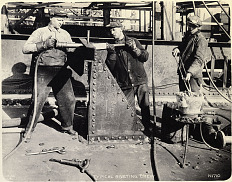 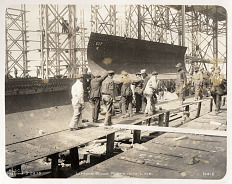 From a scrapbook donated by James D. Andrew Jr. 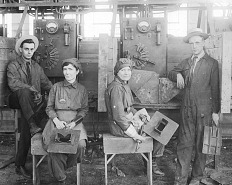 Electric welders at Hog Island, about 1918

Produced by the History Channel

‹ Answering the Call up We do things in a big way ›