Shipyards and the U.S. government learned invaluable lessons about shipbuilding during World War I. The United States began increasing the size of its merchant fleet in 1936, well before it entered the Second World War. The goal quickly became building sturdy, reliable ships in a hurry—faster than German submarines could sink them. By 1943, American shipyards turned out three a day—nearly 3,300 over the course of the war.

To build the merchant fleet, the U.S. Maritime Commission expanded existing shipyards and built new ones along the Atlantic, Pacific, and Gulf coasts. To simplify and speed construction, the ships they produced would be virtually identical. The types of ships designed for emergency construction were called “Liberty” and “Victory” ships.

They built 18 brand new shipyards just for Libertys. And put 650,000 Americans—women, men, young people, old people—building these ships. They became the largest fleet of ships ever built in the history of the world in such a short period of time.
—Rear Adm. Thomas Patterson, United States Merchant Service, Ret. 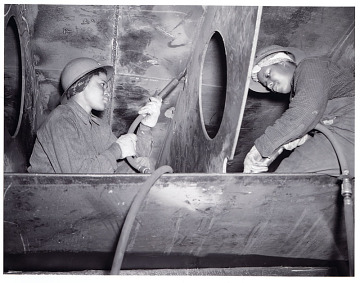 “Wendy the Welder” and “Rosie the Riveter”

Women entered the work force in history-making numbers during World War II. At the peak of wartime production in 1943, women made up more than 10 percent of the work force in most of the shipyards. Although “Rosie the Riveter” was their symbol, there actually were few women riveters. “Wendy the Welder” is closer to the truth, since women helped assemble the first generation of welded ships. These women are chipping excess metal from a welded joint at Baltimore’s Bethlehem-Fairfield Shipyards.

Maria Isabel Solis Thomas worked as a welder at the Richmond, Calif., shipyard during the war. Small and trim, she and her sister Elvia could work even in the most cramped areas of the ship. She recalled, I was so proud because, man, I did it just exactly the way they wanted (me) to. And here I come out, and they said, ‘Hi Shorty. You did pretty good.’ 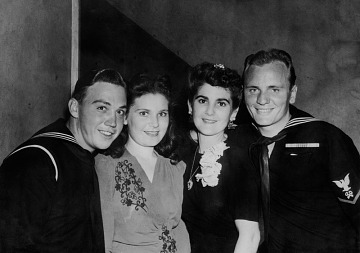 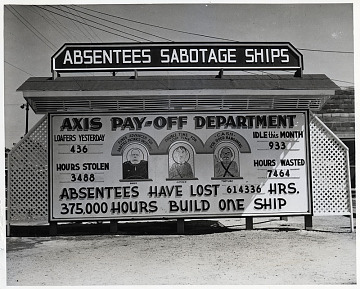 Work incentive posters were used to pressure shipyards and their workers to keep up production. Posters stressed the importance of shipbuilding to the nation. Missing a day of work was unpatriotic. 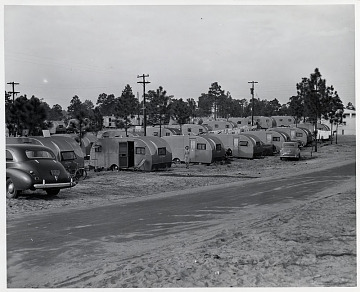 The rush of workers into shipyards strained housing and school systems in coastal communities around the country. Many shipyards built whole neighborhoods of prefabricated homes for their employees, or brought in trailers like these at the North Carolina Shipbuilding Co. in Wilmington, 1942. 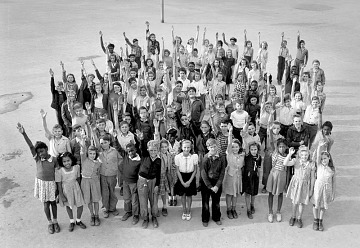 World War II scrambled American society. Jobs in shipyards brought men, women, and families to parts of the country they had never visited before. In their new homes, they often lived and worked among people of many different backgrounds. In 1942, Photographer Dorothea Lange took this photograph in Richmond, California, noting, “Every hand up signifies a child not born in California.”

Courtesy of The Dorothea Lange Collection, Oakland Museum of California, City of Oakland 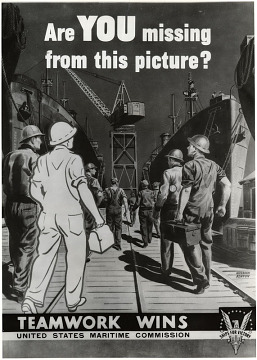 Are you missing from this picture?

The U.S. Maritime Commission recruited shipyard workers with posters like this, about 1944. 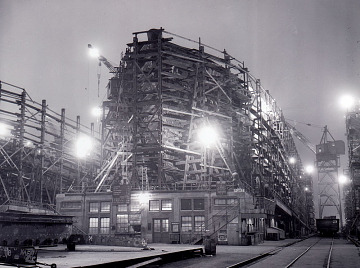 In wartime shipyards, like this one in Baltimore, workers labored around the clock. Two months before Pearl Harbor, the first Liberty ship, named for the Revolutionary War patriot Patrick Henry, was launched in Chesapeake Bay. 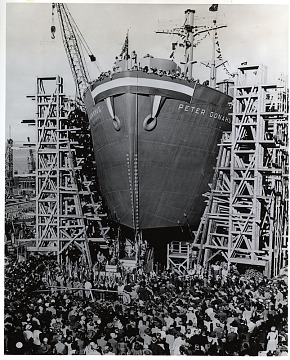 Launching ceremonies were public events, meant to lift morale among workers as well as other citizens. Most of the launching sponsors were women, chosen because of some connection to the ship or the community.

The Liberty ship Peter Donahue, named for the founder of Union Iron Works in San Francisco, was launched on February 12, 1943, in Sausalito, California, with many Boy Scouts present. The sponsor, Mrs. Thomas C. Nelson, was the mother of two Eagle Scouts, one of whom was missing in action with the U.S. Navy at the time. 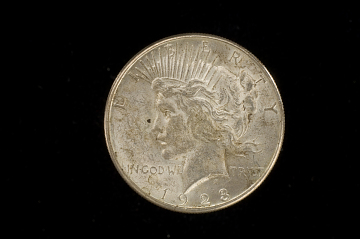 Launching gangs were responsible for ensuring a smooth transition as the ship slid from land to water. Shipwright Archie Green received this coin from his crew leader to commemorate the successful launching of a C3 cargo ship in San Francisco. 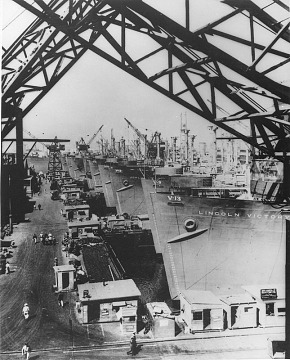 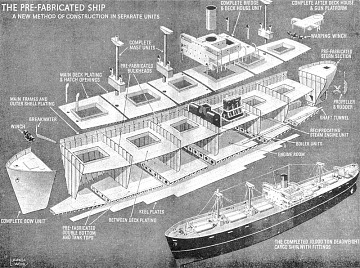 To build ships as quickly as possible, workers pieced them together assembly-line fashion from pre-made sections built at the shipyard. About 120 large units, made up of some 250,000 items, went into building each ship.

Transfer from the U.S. Department of Commerce, U.S. Maritime Commission (through J.M. Winston)

American shipyards mass-produced tankers as well as cargo ships. Some 533 oil tankers like this were built during the war. 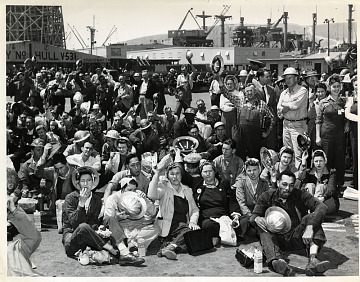 The shipyards that built the Liberty ships were located along the East, West, and Gulf coasts. At the peak of Liberty ship production in 1943, there were 18 yards specializing in Liberty ship assembly. Naval vessels were also under construction at different locations. 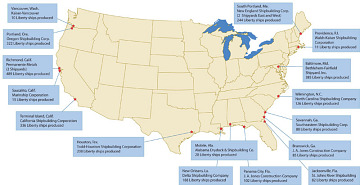 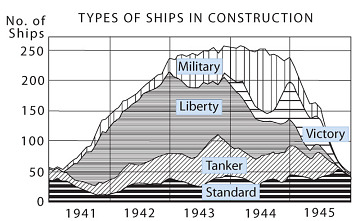 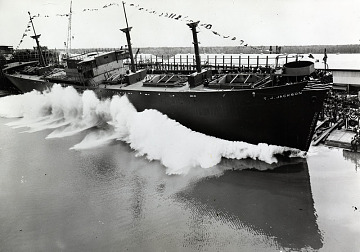 ‹ Work and Patriotism up Merchant Seamen ›