Fresh, salted, dried, and smoked—these were the options for preserving and eating salmon before the spread of canning technology in the mid-1800s. William Hume, his brother George, and their friend Andrew Hapgood established the first cannery on the Columbia River in 1866.

Other companies followed, as did fishermen, laborers, and merchants. By 1883, there were 55 canneries on the Columbia, and the Pacific salmon industry was among the most valuable fisheries in the world. That year, the best ever, the canneries piled up 630,000 cases of salmon—30.2 million one-pound cans.

Courtesy of Kent and Irene Martin

A Monument to Salmon

Beacon Brand salmon from Astoria borrowed the most famous American beacon of all, the Statue of Liberty, for its label. Lady Liberty is shown in New York Harbor holding a big salmon in one hand and a can in the other.

The Pacific Northwest’s logging, fishing, and maritime industries attracted many Scandinavian immigrants. Fishermen from Finland, Norway, Sweden, and Denmark settled around the mouth of the Columbia River to work in the salmon industry. The Scandinavian influence on these communities was reflected in boat design and construction, foodways, language, and other cultural forms of expression.

The river has become a perfect web of nets.
—D. S. Jordan and C. H. Gilbert, The Salmon Fishing and Canning Interests of the Pacific Coast, 1887 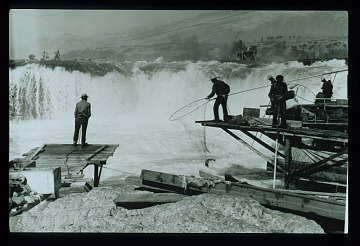 Courtesy of the National Oceanic and Atmospheric Administration

Fishing at the Falls

Between 1850 and 1900, the Indian population along the Columbia declined by 95 percent due to disease, death, and displacement. The non-native population increased 1,000 percent. Native peoples held onto some of their traditional fishing sites, including Celilo Falls. They used dip nets to capture fish, keeping some for food and selling the rest to the canneries.