The Great Lakes and a network of rivers opened the vast American heartland to a nation moving west. 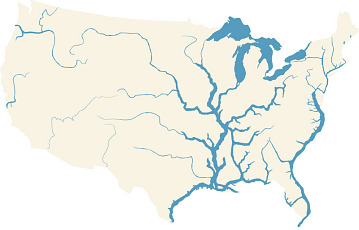 Inland waterways are a road map to much of the nation’s history. They guided the travels of Native Americans, explorers from Europe, and streams of newcomers who established businesses, towns, and cities. The same waters linked people back to hometowns, families, and markets on the East Coast and in Europe. Inland waterways helped hold together the people and economy of the nation as it grew throughout the 1800s.

‹ Inland Waterways up Working the Lakes ›