The Wreck of the Edmund Fitzgerald

On November 9, 1975, the Edmund Fitzgerald pushed across the waters of Lake Superior with a cargo of iron ore. A storm came up in the afternoon and pounded the ship through the night with winds up to 75 mph, blinding snow, and waves reaching 25 feet. That evening, the ship radioed another vessel, Avafors, with a warning:

Avafors: “What’s that, Fitzgerald? Unclear. Over.”

Fitzgerald: “I have a bad list, lost both radars. And am taking heavy seas over the deck. One of the worst seas I’ve been in.”

At 7 p.m., the Fitzgerald radioed another nearby ship, “We are holding our own.”

Less than two hours later, the Edmund Fitzgerald had disappeared from radar. No distress calls were ever received. Rescuers found a few empty lifeboats, buoys, and other bits of debris on the lake. Several days later, the remains of the ship were discovered in two pieces on the bottom of Lake Superior, only 17 miles from the safety of Whitefish Bay. All 29 crew members were lost. Every November 10, the bell at the Mariner’s Church in Detroit, Michigan, rings 29 times in their memory. 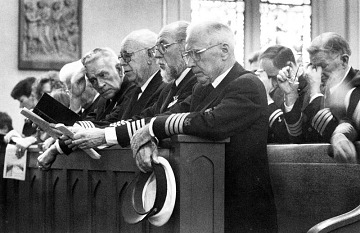 Great Lakes captains, family members, and friends pay their respects at a memorial service for the Edmund Fitzgerald crew at Detroit’s Mariners’ Church.

Photograph by Dean Koepfler, courtesy of The Detroit News 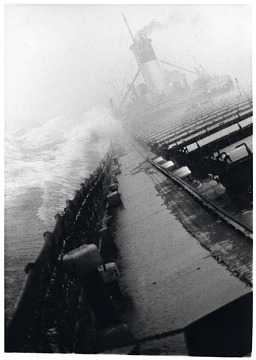