New Orleans was a seaport as well as a river port, and a vital connection between the American heartland and the rest of the world. By the 1820s, cotton, grain, pork, and other agricultural products floated down the Mississippi River to the city’s docks. The rise of the steamboat brought trade upriver and opened the Midwest to settlers and goods. By 1850, New Orleans was the second busiest port in the United States and the fourth largest in the world.

At various points in its history, France, Spain, and the United States had all claimed the city. Its residents and visitors created a rich mixture of languages, religions, foods, and traditions.

New Orleans is both the exporting and the importing mart of the Mississippi valley.
—Historical Sketch Book and Guide to New Orleans and Environs, 1885
As for the confusion of tongues in the market, it was simply delicious. French, Italian, Spanish, Portuguese, Dutch and “Gumbo” contended with each other for supremacy; but French predominated...
—English visitor George Augustus Sala, writing about New Orleans in America Revisited, 1882 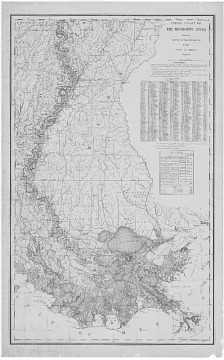 Courtesy of the Mississippi River Commission 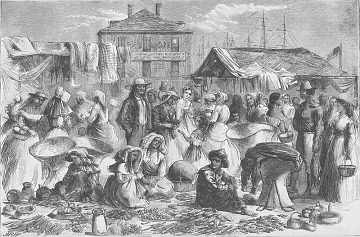 Courtesy of the Mariners’ Museum

‹ An Artificial River: The Erie Canal up Web of Cotton ›