[56]
Wednesday May 23rd 1849. Weather Cool. Wind
South blowing a good Stiff breese. we dropped
Anchor in harbour opposite the City of
Valparaiso about 12 M. making the Passage
from St. Catherines to this place in 53 days and
from New York including 14 days stoppage at
St. Catherines in 121 days. Valparaiso lies in
Lat 32° 51' South. Long 73° 57' West. We had a beau-
-tifull Sail along up the Coast this morning
going at the rate of 10 to 12 Miles an hour under
a full spread of Canvass. 6 other vessels going
in at the same time, giving us a fair trial of
our Barks Sailing qualities. And I must say
she did her part nobly. if the chase had
been of a few hours longer duration I think
we would have beat the whole fleet. We
had a fair opportunity of viewing the beautiful
Mountain Scenery along the Coast, which
for grandeur, magnificence and wildness,
exceeded anything of the Kind it has been my
lot to behold before. and farther back from
the Coast range the lofty Andes, raising their
bold Peaks and piercing the clouds with their
Snow-capt Summits. Constrasting beautifully
with the dark foliage of the Mountains
below, the Harbour presented quite an
imposing appearance. there were lying

[57]
at anchor upwards of 50 vessels, of all classes. The
U.S. Sloop of War Dale just returned from California
en route for New York. the news she brought from
the Gold Mines was flattering, and confirmed
the most exaggerated accounts before given, our
hopes in regard to the future prospect of obtain-
-ing wealth from the Gold mines in California
were strengthened, and we were anxious to
resume our voyage as soon as possible. We
sent our letters home by the Dale she Sailed
on the 26th inst. She takes also the U.S. Minister
to Chili who I understand has been recalled.
The U.S. Revenue Cutter Ewing Lieut Bartlett
Commanding, arrived here a few days previous from
New York and bound for California. There was
an English Man of War Frigate Asia also an
English War Steamer the Gasgon I believe is the
name. there were several vessels lying here
from New York and bound to San Francsico
Among them were the Bank Peytona. Ships Florence
and Daniel Webster & Brig Mary W. together with
Several others from different ports in the States
The harbour of Valparaiso is not very extensive
but safe except for Northern Gales for which
it lies very much exposed. The Anchorage
ground is good. The City contains a population
of about 50,000. it was destroyed in 1825 by an
Earthquake. it is built principally built upon
a Steep Side hill, and can be viewed at a Single
glance from where our Ship lies at Anchor, which
is about one mile distant from the Shore, it
has no Docks, freight &c is conveyed to and from
the Shores by means of Launches or Barges. it is a
place of considerable trade. The Business is
confined principally to the lower Streets. they

[58]
being the only Streets that are navigable for
vehicles of any description. the other Streets or
more properly speaking lanes or paths are scarsely
navigable for pedestrians unless remarkably
surefooted. the largest part of the City is built
upon ridges, separated from each other by deep
ravines. the majority of the dwellings or adobes is
constructed of Mud or Sun burnt Bricks and
the roofs covered with Tiles or Straw. those in
the lower part of the City are more substantially
built of Stone or bricks. Merchandise at present
is remarkably high, owing partially I suppose
to the great increase of trade caused by the
more than usual number of Vessels stopping
here for supplies &c bound to California. The
following is list of some of the prices. Pork $35.00
per bbl Flour $10.00 Butter “inferior” 6p Cheese 1/p
Hard coal $35.00 per ton and everything else in
proportion except Horse hire. a good riding
horse can be procured for 6p per day. with
the promise of returning the Saddle, all
the produce and vegetables consumed here are
brought in from the interior on Pack Mules
or large Carts driven by 6 or 8 Pairs of Oxen.
The Country back of the City is high and
barren. not a vestage of Wood is discernable.
Spring water is scarce and is brought into the
City on Pack Mules. The principal fruits exp-
-osed for Sale in the Markets are Oranges, Lemons
Peaches, Pears, Grapes &c. The Gold Fever rages
quite high here as in the States larger numbers
of Mechanics and labourers, have left their
different occupations and employments
and gow to the diggins. Carpenters & Masons
that are left demand and obtain for their

[59]
Labour from $3 to $5.00 per day. the price of Passage
from here to San Francisco in Sailing Vessels is
$250.00 Freight is worth $30.00 per ton, and Vessels
are scarce at those rates. To the humble admirer
of Nature and its Scenery those Ports that we
have visited in South America present many
beautiful prospects, Vegetation abounds almost
Spontaneous. The Climate healthy and Salubrious,
and the resources for the Sustenance of the Human
frame is almost within their own grasp and
with a very little exertion. And in viewing
the lofty Mountains, Awful Chasms, frightful
precipices, and deep ravines, one cannot help
but admire the beauties and magnificence
of the works of the Almighty. Those lofty Mountains
the land marks that have for ages withstood
the Storms and Tempests, and gave the bounds
to the wild Ocean, show the insignificance of
the Works of Man, compared with those of the
Creator of the Universe. On the afternoon of
the 26th we were busily at work in making
preparations to resume our Voyage. the hour
for Sailing was 5 PM, but from unavoidable
detentions in collecting the Passengers toget-
-her it was 7 PM before we weighed Anchor.
the wind in the meantime had completely
left us. An Accident came near befalling us
which if happened would probably have
reminded us of Valparaiso for Some time to
come. in our efforts to beat out the Harbour with
a light wind. during the night the Current was
rappidly drawing the Ship upon a ledge of rocks
about 4 AM all hands and passengers were called
up on Deck to save the Ship if possible by
towing her off. she was then within a few

[60]
rods of the rocks, when the water was breaking over
with great violence. 3 boats were lowered and
manned with all possible despatch and com-
-menced the work of towing her off. but in spite of
all our efforts she was still drifting, and was
likely to go Stern on. one of the Boats was despatched
to the English Frigate for assistance, they sent
off 2 Boats well manned to our aid. their timely
relief with a light breeze which, sprang up at
at the time favoured us greatly, and we were
once more beyond the dangerous ledge. 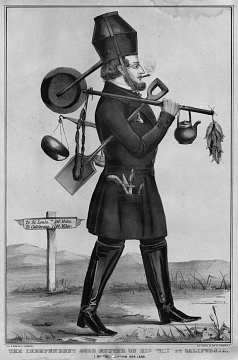 The Independent Gold Hunter on his Way to California

N. Currier, of the famous printmakers Currier & Ives, produced this ca. 1850 print of what a well-equipped gold hunter needed for a casual transcontinental stroll from the East to the gold mines of California. The drawing mocks the exaggerated reports reaching the East of how easy it was to collect the precious metal. In fact, this gentleman would scarcely have lasted a day on his journey to the California gold fields, tricked out in this ridiculous costume and gear.

In December 1848, a group of five young men from New York formed a company to sail to California and seek their fortunes in the California gold rush. Two other New York speculators financed the expedition, which was to last for two summers, or digging seasons. They developed a contract for their company that laid out the terms and duties of the company members. The financiers invested $2,500.00, in exchange for 25% of any future revenues from the gold fields.

We the undersigned, Alexander Van Valen, Mathew Van Sicklen, Stephen P. Clark, William Byxbee, and Richard I. Paulisen, of the City of New York, Severally and conjointly do hereby agree for and in consideration of the Sum of Twenty five Hundred Dollars, advanced by Mesrs Henry A. Kerr and B.S. Clark, to agree to the following terms ---

First     To proceed from the Port of New York on or about the first day of January Eighteen Hundred and forty nine, to the port of San Francisco in upper California, and from thence to proceed to the Gold District without unnecessary delay, and employ our time to the best advantage gathering Gold, and there to remain through two Mining or Summer Seasons-

Third     That the above mentioned Sum of Twenty five Hundred Dollars, is to be appropriated in the following maner. Two Thousand Dollars for Passage, Provisions, Mining Tools &c, the Ballance Five Hundred Dollars to be retained in the hands of the Treasurer to pay all necessary expences in California-

Fourth     All expences incurred, after the expenditure of the above mentioned Five Hundred Dollars are to be paid out of the earnings in California. It is hereby Mutually agreed between the Parties that Alexander Van Valen shall be the Treasurer and Correspondent of the Company

Sixth     We hereby agree and bind ourselves, to remain with this Party through Sickness adversity and prosperity, Mutually to protect and defend each other, untill our return to New York-

Eight     It is also mutually agreed that after defraying the expences, We the five undersigned persons are to receive on our return to the City of New York, Three Quarters of all the nett proceeds, of all our earnings during this expedition the Ballance, One Quarter, to be the property of Mesrs Kerr & Clarke-

Tenth     We the undersigned five Persons do hereby bind ourselves to pay five per cent of our Share of the nett proceeds, of this expedition, to the legal executors or assigns, of any or either of the Party who may die after we shall have Sailed from the Port of New York. Said five percent to be paid out of our Share of the nett proceeds after the Death of any or either of us The above percentage to be paid after the close or immediately after the amount of each Share is determined.

Given under our hands and Seals this Twentieth day of December One Thousand Eight Hundred & forty Eight.