Bonus Question: Given the terms of the miners’ agreement, calculate the dollar amount that each miner was able to take home for his labors. How much money did the two New York financiers make or lose on this venture? Note: The original company of miners numbered five, but two left the group in California and were not paid.

...I can now see that I have done wrong. I ought to have remained at home, and endeavoured to fullfil my pledge to love, cherish And protect. I know that I have erred, and hope you will pardon my misconduct and neglect, and may I never, (if permitted to return once more), be induced to follow the golden bubble again. at the time I thought I was doing for the best, prompted by the hopes of realizing a speedy Fortune, blinded by the dazzling prospects of obtaining a little Gold, slighted her who it was my duty not to neglect and whom it was my good fortune to be connected with, though undeserving mortal as I am, if you can pardon me this time, I shall feel gratefull, and if it should ever be my lot, to visit a distant country again in hopes of bettering our condition in life, may we be united in the enterprise, and perhaps success will follow the undertaking, if not we can at any rate enjoy the pleasures of each others society.

Our Summer Campaign for digging is already marked out. A Company of 17 has been formed to turn the River again this season a short distance below where we turned it last Season. they consist of Isaac Cornells party 6 in number Reynolds & Sawyer, passengers in the same ship with us, and who have been with us all the time we have been at the Mines, W.H. Van Siclen, and 5 Gentlemen from Illinois who have been our nearest neighbors this winter, and a finer sett of men you never saw. And 3 of us which makes the number 17. Our Company now is reduced to 3. Clark left us in January & Paulison in October, Wm H Van Siclen has boarded with us since October last, he paid us $10 a week for Board untill Jany 1st and then we raised it to $14 a week-on the first of March he left us and joined Reynolds & Sawyer and have gone to Murphys new diggings about 25 Miles south from here to sett up and Eating House, untill we go at the River which will be the middle of June. I think that they will do well with a business of that kind. I think it is better than Gold digging. I suppose all of you believe what you see printed in the papers, and of large Fortunes obtained in a few days, and large lumps being found, as being all true. It was reported that a 94 pound lump was found at Murphys diggings. I have been in the place and saw the persons who have seen it. One man says that there was about 2 ounces of Gold in it and that the rest was white Quartz Stone. about the large Fortune Mr Higgins got that you speak of in your letter we have heard nothing about. where there is one man that gets a pile or has good luck in a place, there are thousands who do not earn a living. it is only the extreme cases that are published they are much exaggerated. We have got now on hand about 8 pounds, and we have done better than the average. Cornells party have done better than we have during the Winter. Mat is our Capt now and he feels proud of the Office, but it ammounts to nothing...

at present I think I shall start for home by the 1st of Dec or Jany next. I do not intend to remain another Winter in California alone at all events. Kiss the Children for me, and tell them not to forget me, and give yourself a good hug on my account. I wish I could do it myself——

In December 1848, a group of five young men from New York formed a company to sail to California and seek their fortunes in the California gold rush. Two other New York speculators financed the expedition, which was to last for two summers, or digging seasons. They developed a contract for their company that laid out the terms and duties of the company members. The financiers invested $2,500.00, in exchange for 25% of any future revenues from the gold fields.

We the undersigned, Alexander Van Valen, Mathew Van Sicklen, Stephen P. Clark, William Byxbee, and Richard I. Paulisen, of the City of New York, Severally and conjointly do hereby agree for and in consideration of the Sum of Twenty five Hundred Dollars, advanced by Mesrs Henry A. Kerr and B.S. Clark, to agree to the following terms ---

First     To proceed from the Port of New York on or about the first day of January Eighteen Hundred and forty nine, to the port of San Francisco in upper California, and from thence to proceed to the Gold District without unnecessary delay, and employ our time to the best advantage gathering Gold, and there to remain through two Mining or Summer Seasons-

Third     That the above mentioned Sum of Twenty five Hundred Dollars, is to be appropriated in the following maner. Two Thousand Dollars for Passage, Provisions, Mining Tools &c, the Ballance Five Hundred Dollars to be retained in the hands of the Treasurer to pay all necessary expences in California-

Fourth     All expences incurred, after the expenditure of the above mentioned Five Hundred Dollars are to be paid out of the earnings in California. It is hereby Mutually agreed between the Parties that Alexander Van Valen shall be the Treasurer and Correspondent of the Company

Sixth     We hereby agree and bind ourselves, to remain with this Party through Sickness adversity and prosperity, Mutually to protect and defend each other, untill our return to New York-

Eight     It is also mutually agreed that after defraying the expences, We the five undersigned persons are to receive on our return to the City of New York, Three Quarters of all the nett proceeds, of all our earnings during this expedition the Ballance, One Quarter, to be the property of Mesrs Kerr & Clarke-

Tenth     We the undersigned five Persons do hereby bind ourselves to pay five per cent of our Share of the nett proceeds, of this expedition, to the legal executors or assigns, of any or either of the Party who may die after we shall have Sailed from the Port of New York. Said five percent to be paid out of our Share of the nett proceeds after the Death of any or either of us The above percentage to be paid after the close or immediately after the amount of each Share is determined.

Given under our hands and Seals this Twentieth day of December One Thousand Eight Hundred & forty Eight. 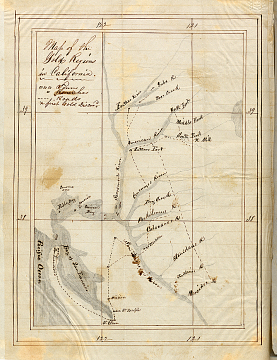 Map of the Gold Regions in California, 1850

In the back of his 1849/50 gold rush journal, Alex Van Valen drew a map of the California gold fields. [FYI: He sent one to Susan back in NY as well] San Francisco Bay is in the lower left; the original find by James Marshall at Sutter’s Mill is marked with an asterisk. Van Valen’s company worked mostly along the “Meckelemus” (Mokelumne) River in the middle of the map, figuring it was as productive as any of the other mining areas.

The Way They Come from California

N. Currier, of the famous printmakers Currier & Ives, produced this 1849 fanciful print of a big ship laden with huge quantities of gold and passengers returning from the California gold rush to New York to cash in their loot. Passage aboard the ship was ”10,000 ounces of gold not found.” One of the prospectors left behind on the shore is offering one million ounces for his return passage, saying he is starving. 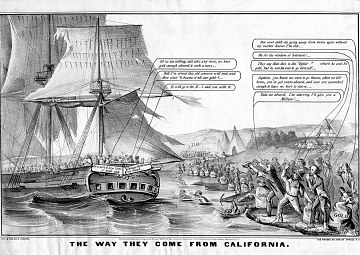