Image of John Jea: Reproduced from The journal of a voyage from Charlestown, S.C., to London undertaken during the American Revolution by a daughter of an eminent American loyalist (John Jea) in the year 1778 and written from memory only in 1779. Baker Business Historical Collections, Harvard Univerisity, E278.A2 A29. http://pds.lib.harvard.edu/pds/view/2581875?n=5&s=4

Trying to piece together a sense of what life was like for a particular group of people in any given era takes historical thinking skills. Examining multiple sources gives historians a clearer idea of how people lived in the past. Using artifacts and documents together can help determine who may have owned an object, or a person’s role and location during an important event.

A sailor’s sea chest held personal items and clothing for entire voyages. It was his store, library, bank, and link to home. A heart with the name “Jan Smart” is carved inside the lid.

Loss of the American ship Hercules, Captain Benjamin Stout, on the Coast of Caffraria, June 16th, 1796

From James Lindridge (ed.), Tales of Shipwrecks and Adventures at Sea. Being a Collection of Faithful Narratives of Shipwrecks, Mutinies, Fires, Famines, and Disasters, incidental to a Sea Life; Together with Celebrated Voyages, Amusing Tales, Tough Yarns and Interesting Anecdotes... (London: William Mark Clark, 1846) 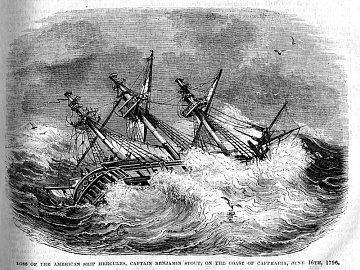 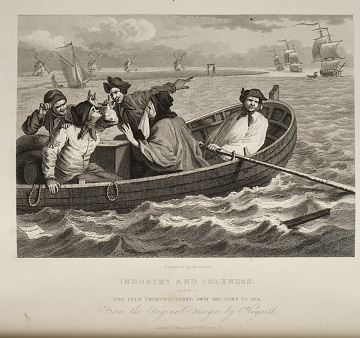 In this 18th-century print, a young man is shown the brutality of seafaring by three unsavory sailors. While one rows, another taunts him with the lash, used for discipline on ships. The third points to the body of a pirate hanging from the gallows. His mother weeps, perhaps at the prospect of losing her son to the sea.