From Many, One
Maria Isabel Solis Thomas, Shipyard Worker
1944

World War II scrambled American society. Jobs in shipyards brought men, women, and families to parts of the country they had never visited before. In their new homes, they often lived and worked among people of many different backgrounds. At the peak of wartime production in 1943, women made up more than 10 percent of the work force in most of the shipyards. Listen to the story of Maria Isabel Solis Thomas, to gain an understanding of the immense changes World War II caused within American society. 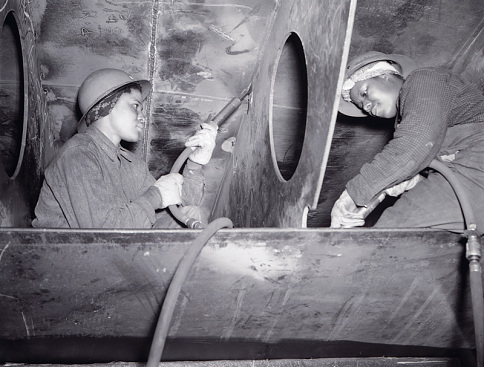 “Wendy the Welder” and “Rosie the Riveter”

Women entered the work force in history-making numbers during World War II. At the peak of wartime production in 1943, women made up more than 10 percent of the work force in most of the shipyards. Although “Rosie the Riveter” was their symbol, there actually were few women riveters. “Wendy the Welder” is closer to the truth, since women helped assemble the first generation of welded ships. These women are chipping excess metal from a welded joint at Baltimore’s Bethlehem-Fairfield Shipyards.

This page from a 1944 booklet about the four shipyards in Richmond, California, provides a glimpse of the workforce during wartime. At peak production in 1943 there were 90,000 employees on the payroll in all of the yards combined. The average Richmond Shipyard worker earned $61.00 per week in 1944.

From A Booklet of Illustrated Facts about the Shipyards at Richmond California, Second edition published by the Permanente Metals Corporation (Richmond, California: June 30, 1944). 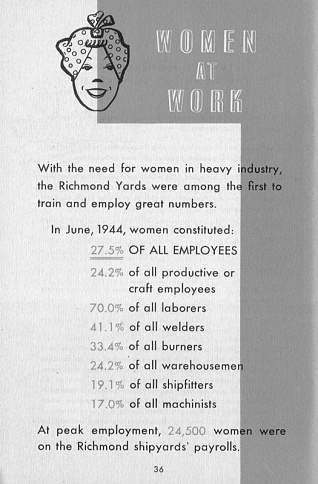 ‹ Harvie and Ransome up Life at Sea ›