Pirates in the Atlantic World

With so much valuable cargo crisscrossing the Atlantic, piracy flourished.

Pirates cruised the Caribbean Sea and the North American coast searching for likely targets. At the height of Atlantic world piracy around 1720, some 2,000 pirates were attacking ships and threatening trade. Many of them had deserted their posts aboard naval or merchant ships or had themselves been captured by pirates. 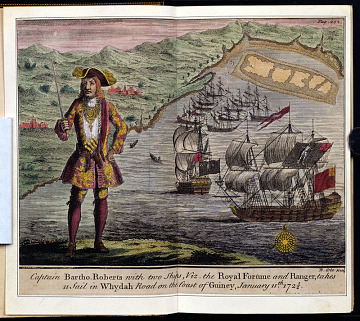 From Capt. Charles Johnson, A General History of the Robberies and Murders of the Most Notorious Pyrates . . .(London, 1724)

Pirate Captain on the African Coast, 1722

Capt. Bartholomew Roberts raises his sword to his two ships after capturing a fleet of eleven English, French, and Portuguese slave ships off the coast of Africa. The ships surrendered without a fight because the commanders and crews had gone ashore to deal with captives and cargoes.

‹ The End of the Slave Trade up Edward Teach: The Pirate Blackbeard ›