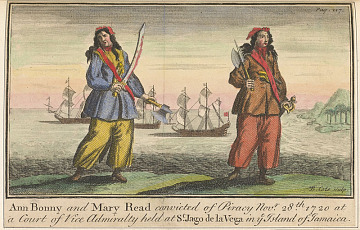 From Captain Charles Johnson, A General History of the Robberies and Murders of the Most Notorious Pyrates . . . (London, 1724)

Female buccaneers were rare, but Anne Bonny and Mary Read briefly led pirates’ lives in the Caribbean. Both sailed with Captain “Calico” Jack Rackam and fought beside their shipmates.

In 1720, Calico Jack and his entire crew were captured, tried, and sentenced to death. But both women were pregnant, and the court deferred their sentences. Read died of a fever in prison; Bonny gave birth in prison and was set free.

‹ Edward Teach: The Pirate Blackbeard up The Pirate’s Arsenal ›