Factory trawlers are large vessels that pull enormous nets and process the catch at sea. They produce frozen fish fillets, minced fish for making fish sticks, and other products that feed people around the world.

Largely unregulated for decades, fleets of trawlers nearly emptied the waters of cod in the North Atlantic until restrictions were enforced in the 1980s. In the North Pacific the story is different. Within the zone for exclusive fishing by U.S. vessels, a consortium of companies has divided the quota of fish available to the fleet. This has ended the race for fish, which often resulted in crew injuries and wasteful fishing practices. 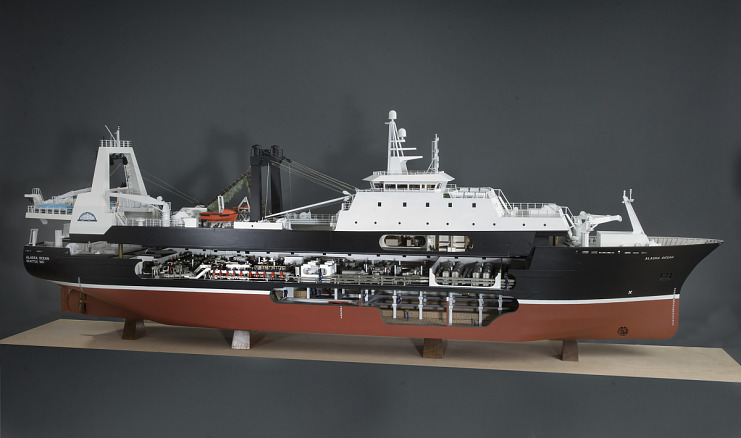 Gift of the At-Sea Processors Association

Alaska Ocean is one of the largest factory trawlers in the U.S. fleet. It operates in the North Pacific and the Bering Sea for about eight months a year, fishing for two abundant species, pollock and hake. The crew harvests roughly 300 metric tons of fish per day. Independent observers live aboard and monitor the harvest to document the bycatch—the catching of any species other than those targeted.

This model, built by Erik A. R. Ronnberg Jr., highlights the factory deck. The fish butchering is mechanized, but dozens of workers are needed to operate the machinery and keep the product sanitary during packing and freezing.